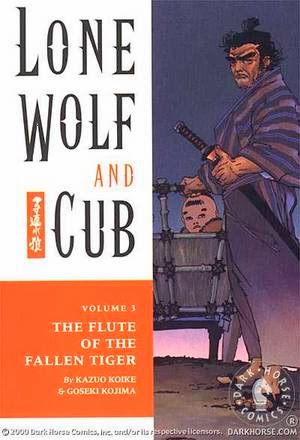 Lone Wolf & Cub, vol. 3: The Flute of the Fallen Tiger


Volume three of “Lone Wolf and Cub” expands on Ogami Itto’s backstory quite a bit and finally shows us what led an upstanding samurai to abandon the world and embark on the path of the assassin. It also shows us that those who fear Lone Wolf and Cub do so not only because of the skill with which he wields his sword, but due to the knowledge of the ways and secrets of the Shogunate that he possesses. Criticism of the hypocritical nature of the way of the samurai continues to be voiced and it seems at times as though Ogami Itto is a corrective to the offenses of those that abuse their powers grown from their very ranks and using their own methods against them.

“The Flute of the Fallen Tiger”: Ogami must face three deadly fighters whose job it is to safely transport key witnesses in disputes between Hans to the court of the Shogun. Interestingly we start to see the mysterious assassin Lone Wolf and Cub starting to be identified as one and the same as Ogami Itto, one time executioner for the Shogun. Agents of the powers-that-be know that this deadly assassin is more than just a warrior to be reckoned with, he is one of their own whose inside knowledge might shake the place of the Shogunate itself.

“Half Mat, One Mat, A Fistful of Rice”: Merely stopping to watch an itinerant street performer leads Lone Wolf and Cub into a battle of life and death. This is another case where Ogami is recognized and must fight against a warrior of exceptional talent in order to continue on his quest. This time, though, his enemy takes up the sword not out of a wish to safeguard the powers-that-be from an enemy who knows their secrets, but rather through the fear of a compassionate man that the unchecked violence of Lone Wolf and Cub will lead to far too much suffering and death. So far in the series this tale is probably the most explicit in its criticisms of the bushido way and the imbalance and violence that it spawns in society.

“The White Path Between the Rivers”: At last we get to witness all of the events that led Ogami Itto, the Kogi Kaishakunin (the Shogun’s own executioner), to adopt the way of the assassin and take to the road of meifumado with his baby son. A tale of murder, political intrigue, and vengeance that doesn’t leave one too surprised at the ruthless determination that Ogami adopts, and we get our first glance at his true enemy, the wily and resourceful  Yagyu Retsudo, secret leader of the powerful Yagyu clan.

“The Virgin and the Whore”: A young woman sold into prostitution kills her procurer after he attempts to rape her and ends up running for protection to Lone Wolf and Cub. Uncharacteristically, Ogami decides to intervene in the affairs of the ‘real world’ and protects her in the face of the threat of death and torture at the hands of her Yakuza masters. What could possibly cause Ogami to abandon the heartless path of meifumado merely to protect a young girl in trouble? Does his compassion perhaps have some other motive more true to the ruthless assassin we have come to know?

“Close Quarters”: Once again we see that Ogami has to beware of not only his targets, but also his employers. Yet again putting his son in danger’s path and using him as a tool to fool his victims, Ogami infiltrates the hideout of a group of rebellious samurai in a bid to halt their attempt at coercing their Han Governor into giving up on a newly instituted lumber scheme. As is often the case Ogami’s clients aren’t always happy to let the assassin leave once he fulfills his contract.

Also posted at Goodreads
Posted by Terry at 7:16 AM