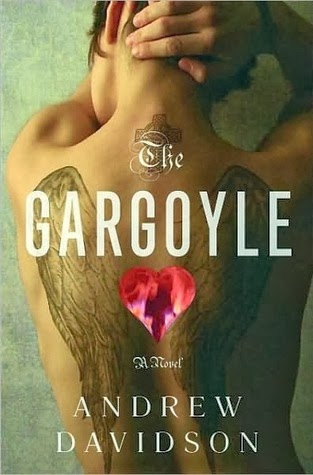 Andrew Davidson
Doubleday
Reviewed by: Nancy
4 out of 5 stars

The narrator of The Gargoyle is a very contemporary cynic, physically beautiful and sexually adept, who dwells in the moral vacuum that is modern life. As the book opens, he is driving along a dark road when he is distracted by what seems to be a flight of arrows. He crashes into a ravine and suffers horrible burns over much of his body. As he recovers in a burn ward, undergoing the tortures of the damned, he awaits the day when he can leave the hospital and commit carefully planned suicide — for he is now a monster in appearance as well as in soul.

A beautiful and compelling, but clearly unhinged, sculptress of gargoyles by the name of Marianne Engel appears at the foot of his bed and insists that they were once lovers in medieval Germany. In her telling, he was a badly injured mercenary and she was a nun and scribe in the famed monastery of Engelthal who nursed him back to health. As she spins their tale in Scheherazade fashion and relates equally mesmerizing stories of deathless love in Japan, Iceland, Italy, and England, he finds himself drawn back to life — and, finally, in love. He is released into Marianne's care and takes up residence in her huge stone house. But all is not well. For one thing, the pull of his past sins becomes ever more powerful as the morphine he is prescribed becomes ever more addictive. For another, Marianne receives word from God that she has only twenty-seven sculptures left to complete — and her time on earth will be finished.

I’m usually suspicious of over-hyped books, but a friend at the library highly recommended it.

A short way into the story, the narrator’s mom dies, his grandmother dies, he gets severely burned in a car accident, and his aunt and uncle die. I felt beat over the head with all the suffering and seriously thought about giving up reading by page 50. Then Marianne Engel, a woman with a history of mental illness, shows up in the nameless narrator’s hospital room telling a story about her previous life in medieval Germany. That was the hook that drew me in.

The story jumps back and forth between stories about Marianne’s life as a nun and scribe, the narrator’s past as a mercenary soldier, and the tragic lives and loves of other people from different places that Marianne has known. The contemporary part of the story deals with Marianne's passion for creating gargoyles, the narrator’s treatment and recovery from his burns, his drug addiction, former career in pornography, his growing friendship with his psychiatrist and physical therapist, and his love for Marianne.

Also posted at Goodreads.
Posted by Nancy at 2:22 PM