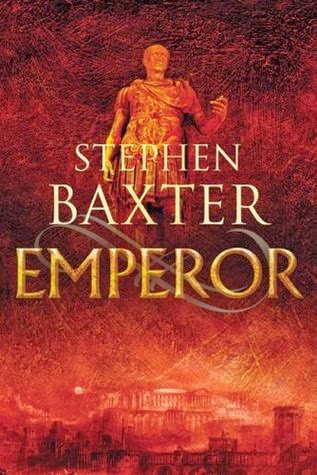 You know that whole "don't judge a book by its cover" thing? Yeah, well, I totally did. In a heady bit of book buying when I graduated from college and got a full time job, I may have celebrated by overindulging in a Books-a-Million and grabbing anything that struck my fancy. I may or may not have read the book blurbs. After all, I was young, financially independent, had a whole life ahead of me to read--who cared how many books I wantonly threw into my book basket? Life was a library, baby, and I was going to spend it all in the stacks.

Tragic mistakes were made that I'm still paying for 7 years later.

For example, Emperor, a book that I feel must shoulder some of the blame for underwhelming me because of its blatantly misleading cover. There's a statue of Julius Caesar on the front pictured over what is clearly Rome. You might think that this is what the book is about. As did I. We're both mistaken because the book takes place in Britain and focuses on the rule of Claudius, Hadrian, and Constantine. It's the literary equivalent of being roofied and waking up next to an ugly book.

Emperor revolves around a prophecy passed down from one family's generation to another in Britain around the time of Roman rule. Unable to understand the enigmatic message in its entirety, each generation uses it to its own ends: during the reign of Claudius, it is mistakenly believed to vouchsafe Britain against conquest by Rome; during the reign of Hadrian, it is used to gain the family profit by manipulating the emperor into building an ill-advised stone wall to protect his empire in Britain; and during the time of Constantine, it is used to make an assassination attempt on the emperor's life.

Consisting of three interlocking narratives that necessarily skip forward in time with only loose connections to the previous tale, the reader never really gets to know any of the characters--which is a shame because many of them could be fascinating if given more depth. Baxter writes with authority about the time periods involved, but the novel is billed as an alternative science fiction history. Without a historian's understanding of the time period, it is difficult to ascertain which parts are alternative and which are authentic. And the science fiction bit is definitely AWOL. There's some very brief philosophical debate about the nature of time (is it linear, or do the past, present, and future coexist at the exact same time?) and about whether or not the prophecy was sent by someone in the future (known only as the Weaver) attempting to change the past, but nothing that I would classify as "science fiction."

The novel would have been far more successful for me if it had been a straight historical fiction (really the alternative part is virtually nonexistent and seems to stem entirely from the prophecy, which never really changes events) and focused on one of the three narratives presented. Baxter has the ability to bring the past to life in a real and satisfying way, but the lack of payoff in terms of the novel's presentation and in its use of the prophecy as an unnecessary device to explore the past make it a tedious read. While I will not read the other books in the series, I would not entirely rule out reading another Baxter novel.

So, the moral of the story is: the next time a cute little book starts making eyes at me from the shelf, I'm damn sure going to take the time to read the blurb before I take it home with me.
Posted by Amanda at 4:56 PM