What was the Fuss All About? 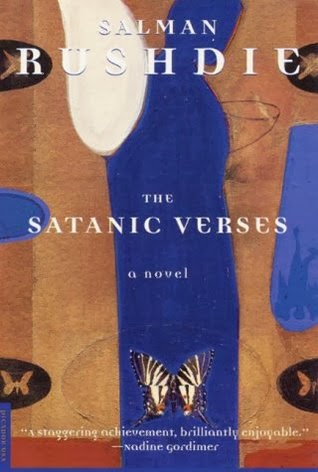 “Just before dawn one winter's morning, a hijacked jetliner explodes above the English Channel. Through the falling debris, two figures, Gibreel Farishta, the biggest star in India, and Saladin Chamcha, an expatriate returning from his first visit to Bombay in fifteen years, plummet from the sky, washing up on the snow-covered sands of an English beach, and proceed through a series of metamorphoses, dreams, and revelations.”

I remember I was working in a book store when this was first released to much controversy over death threats and due in part to that it became a best seller. I am pretty sure that is one of the main reasons I didn't read it then. The other being I didn't always want to read the newest releases. Even then I was reading books from older generations as much if not more so than the latest read. Now that both the book and I are older it was time to see what all the cartoons and threats were about.

I can see where the threats came from but not for the reason I had suspected. This book doesn't treat the prophet well but it definitely parodies the well known Ayatollah Khomeini and Rushdie does a superb job of it. It's unfortunate that he didn't do as great job with the rest of the book. I really feel that all the subplots didn't jell with one another. Each on it's own was better than the whole. I know this can be done better. Just look at Cloud Atlas.

On the other hand his characters were wonderful and some of the scenes had me chuckling. Poor Saladin, when he experiences his change and is confronted by the local police is hilarious. The glimpses into Indian culture were most welcome as well. I love learning especially if it's fun or done with beauty.


This is well worth reading because the writing is wonderful even if the cohesion isn't. I look forward to Midnight's Children.
Posted by Zorena Deckard at 10:00 AM