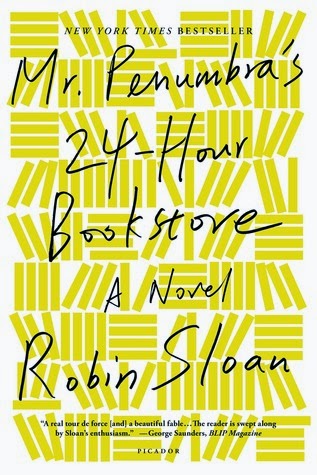 A charming, quietly amusing book, Mr. Penumbra's 24-Hour Bookstore is the literary equivalent of a congratulatory pat on the back in recognition of loving books. "Oh, you read? Well, good for you!" It's a book designed to make the bibliophile break out into a near terminal case of the warm fuzzies, overcome with a sudden desire to break out a blanket, brew a pot of tea or coffee, and settle into a comfortable chair for a day of hardcore reading until--oh, wait!--I'm already doing all of that! Silly me! So the only thing one can do is snuggle into the cushions more deeply and turn the pages more quickly.

Now, for those who know me, that probably comes across as a bit snarky and, to be fair, it is and it isn't. I admit that there's a part of me whose switch isn't flipped by these books that so overtly and blatantly cater to bibliophilia. After all, I'm a lifelong reader and it seems a bit daft me reading a book about loving to read a book. But, damn it, there's a part of me that can't help but be beguiled by it and, if I'm going to go down that road, it might as well be with Mr. Penumbra and crew. Despite a certain predictability and a certain lack of suspense, there's nothing too twee or adorable about it, and the characters are quirky without being too eccentric and are amusing without being too culturally hip, self-referential, and smugly ironic. These are people I wouldn't mind knowing and people I can imagine existing.

Clay Jannon is struggling in his career and in life. A victim of the recession, Clay's once promising public relations career has imploded. Having to redefine his vision of the future, Clay needs both money and direction. He finds both in a "Help Wanted" sign outside of Mr. Penumbra's 24-Hour Bookstore. Thankful to find gainful employment, it takes Clay a while to acknowledge the peculiarities of a 24-Hour bookstore. An excited clientele eagerly returns night after night to check out books from the "Way Backlist," a group of books on impossibly high shelves. The bookstore doesn't so much sell books as loan them to members for purposes Clay can only imagine. It's not long before Clay finds himself embroiled in secret literary societies, an impossible ancient puzzle, an adorable Googler, and a breakthrough that may exist at the nexus of the written word and technology.

I loved the narrator's unusual sense of humor and, despite myself, even grinned over some predictable tropes. So why only a 3? Well, it's more like a 3 1/2. Despite enjoying it, it didn't linger long in memory and the unraveling of the mystery wasn't particularly satisfying. Granted, the mystery here serves as more of a MacGuffin that allows Sloane (via Clay) to wax at length about the glories of reading, whether they be in the form of a book, an ebook, or an audiobook (all readers are welcome here), as well as the glorious possibilities afforded the human imagination through technology, but I still wanted a resolution with more substance given the build-up.

Again, 3 1/2 stars. And I would be lying if I said that half star isn't being thrown in just because of the extra bit of delight in realizing that, when I placed the book on the nightstand and turned off the light, it freaking glowed in the dark! I felt like a 7 year old getting excited over those glow in the dark planetary stickers. I'm telling you, this damn thing is just a giddy machine.
Posted by Amanda at 5:30 AM