What's Wong With This Story? 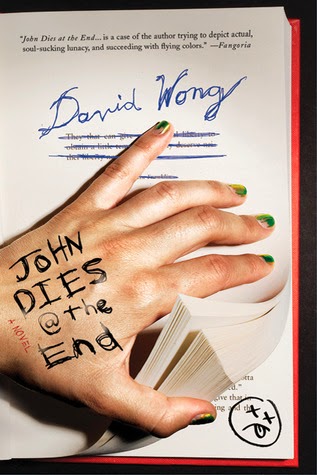 John Dies at the End

Stop
You should not have touched this book with your bare hands.
NO, don’t put it down. It’s too late.
They’re watching you.
My name is David Wong. My best friend is John. Those names are fake. You might want to change yours.
You may not want to know about the things you’ll read on these pages, about the sauce, about Korrok, about the invasion, and the future. But it’s too late. You touched the book. You’re in the game. You’re under the eye.

The only defense is knowledge. You need to read this book, to the end. Even the part with the bratwurst. Why? You just have to trust me.
The important thing is this:
The drug is called Soy Sauce and it gives users a window into another dimension.
John and I never had the chance to say no.
You still do. Unfortunately for us, if you make the right choice, we’ll have a much harder time explaining how to fight off the otherworldly invasion currently threatening to enslave humanity.
I’m sorry to have involved you in this, I really am. But as you read about these terrible events and the very dark epoch the world is about to enter as a result, it is crucial you keep one thing in mind:
None of this is was my fault.


What do you get when you cross Christopher Moore's writing style with William S. Burrough's Naked Lunch? You get Wong's book John Dies at the End! When I first saw horror and humour mixed together I said “Sign me up!” I was an avid horror reader but all the books started to blur and then became too gore soaked just to keep people's attention so I love a good stab (yes I know bad pun) at satire on the genre. This book does not disappoint on the gore and gross level.

Where it does disappoint is when it verges on the too stupid, which is a shame as a lot of the story is well written and keeps you tumbling along with some of the more audacious antics. This was certainly aimed at his Cracked audience and doesn't make much effort to reach past them. A lot of scenarios are just one-upmanship in the gross out arena of a previous scenario.

It's not a book I'd recommend to most people but if you like juvenile and scatological humour you'll love it. Yes I chuckled more than once and yes John dies at the end, sorta.
Posted by Zorena Deckard at 10:00 AM