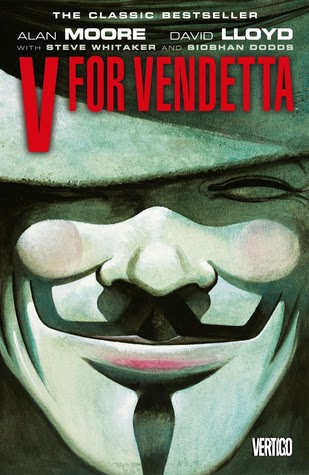 A frightening and powerful tale of the loss of freedom and identity in a chillingly believable totalitarian world, V for Vendetta stands as one of the highest achievements of the comics medium and a defining work for creators Alan Moore and David Lloyd.
Set in an imagined future England that has given itself over to fascism, this groundbreaking story captures both the suffocating nature of life in an authoritarian police state and the redemptive power of the human spirit which rebels against it. Crafted with sterling clarity and intelligence, V for Vendetta brings an unequalled depth of characterization and verisimilitude to its unflinching account of oppression and resistance.
"Remember, remember the fifth of November..."

In a way I'm glad I read Moore's Promethea series before V for Vendetta. It made me appreciate it so much more. It has more depth and far less surrealism and existentialism. I like the stark look of the artwork more then the kaleidoscopic colours of Promethea.

I know a lot of people like to compare the book to the film but these feel like two separate entities to me.
While the film is fantastic in it's own right I get more of a feel for V and the other main characters in the novel. The Evey in the book needs to learn to feel free far more then the self assured Natalie Portman does in the film.
V is more unbalanced but just as poetic as his film counterpart. You get far more glimpses into his psyche.

The totalitarianism rings more true now then it did when the book was written and can also be taken as a bit of a cautionary tale. How much power should and do we allow others to have over us?

I am now sincerely looking forward to reading more of Moore's masterworks then I was before. I also think this book is a great introduction to just how good graphic novels are. Comics, not just for children!