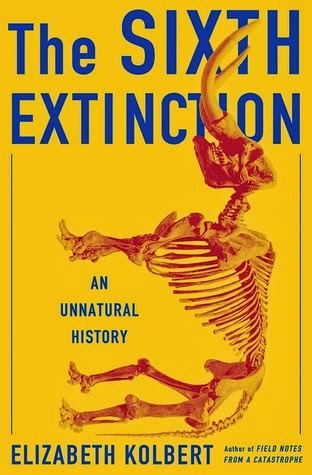 The Sixth Extinction:  An Unnatural History
by Elizabeth Kolbert
Published by Henry Holt and Co.

Looking for a good horror novel that will keep you up late at night? One that features the most remorseless, inventive, and successful serial killer to ever stumble into the written word? One whose body count grows exponentially as his appetite becomes more ravenous, never sated? One who is so adept at killing that he does so without even seeming to try? Well, I have just the ticket: The Sixth Extinction by Elizabeth Kolbert. This is as frightening as it gets, people, and the villain here is us: me, you, and everyone else inhabiting this little blue marble called Earth.

Throughout history, there have been five mass extinction events: the Cretaceous-Paleogene, the Triassic-Jurassic, the Permian-Triassic, the Late Devonian, and the Ordovician-Silurian. All of these involve a cataclysmic shift in environmental conditions, some the result of an external impact. And now Kolbert reports that there may be a sixth extinction: the Anthropocene, caused by the impact of humanity on the environment. Many may believe that this is a byproduct of the Industrial Age, but Kolbert shows us how humans have always had a knack for wreaking wide scale environmental havoc. Always needing and wanting more from our natural resources, we, like kudzu, multiply rapidly, take over every inch of land available to us, and choke out the life that surrounds us.

Kolbert makes the case for recognizing the Anthropocene as a mass extinction event by exploring its casualties and its future victims. As she relates the extinction of the American mastodon, the great auk, and the Neanderthal, as well as the near extinction of the Panamanian golden frog, Hawaiian crow, Sumatran rhino, and several types of bats, one truth becomes increasingly clear: most of these extinctions began to take place when humans entered the environment.

Despite the disheartening nature of the topic, Kolbert writes with dry wit and gallows humor which (for me) always made an appearance at just the right time before things became too depressing. While there is a lot of science here, Kolbert keeps it accessible for those of us who don't while away our days reading scientific journals (you know, while our basic needs and consumer choices destroy everything around us), and her first person narrative keeps it from veering into textbook territory.

There's a lot here that I enjoyed, but three highlights stand out:

1) Kolbert's early chapters about men like Cuvier, Lyell, and Darwin, who were among the first to speculate on extinction and evolution. From our modern perspective, it's easy to forget that extinction, in particular, is a relatively new idea. There was a time when many scientists believed that nothing could become extinct over the natural progression of time; the discovery of fossils began to shift human understanding of the world and of creation. Reading as these men stumble in their understanding of the world, shifting and revising hypotheses, and ultimately discovering that there was a world that existed before mankind is fascinating.

2) The chapters on the sea and corals (which may eventually become extinct, taking with them several organisms that live symbiotically with corals) is particularly interesting for someone like myself who is happily landlocked. For those who don't live near or have a relationship with our seas and oceans, it's easy to see it as a vast nothingness and forget about the world teeming below our waters. The rate of ocean acidification is frightening.

3) The concept of a new Pangaea is an intriguing one. The ease with which we travel to other states, countries, and continents has, in a sense, reconstituted Pangaea in that we knowingly (and unknowingly) introduce new and often invasive plant and animal species into new environments. In doing so, these new host environments haven't developed nature's evolutionary safeguards to keep the balance between predator and prey, often with disastrous results.

While Kolbert makes all of this lucid and entertaining, as well as terrifying, I must admit to some fatigue when I got to the final chapters. Reading about mass extinction can really take a toll on someone whose worldview can basically be summed up as "people suck." Reading such incontrovertible evidence, and knowing that I myself cannot escape the guilt of this accusation, is, in the words of Kolbert on The Daily Show, "kind of a downer." However, we need more downers. We need to be more educated about what we're doing to our environment. Early man deserves a pass: you come into a place and think, "Damn. Look at all these mastodons. We can feast like kings!" So you settle in, live a life filled with mastodon hunts and mastodon meat, have several children, dress them in mastodon onesies, kill more mastodons, always assuming there will be more. After all, you've found the great all-you-can-eat mastodon buffet! You have no concept of the impact your consumption is having on the environment. You haven't seen Disney's The Lion King and therefore don't know of the majestic power of the circle of life (nor of the comedic gold of pairing a warthog with a meerkat). Such days of ignorance should be behind us. We know better, so we should do better.

Although, many of us are 4% Neanderthal because apparently early homo sapiens just couldn't resist the seductive power of a ridged brow. So maybe we're not so smart after all.
Posted by Amanda at 6:30 AM