Sorry, Leonidas, But THIS is Sparta 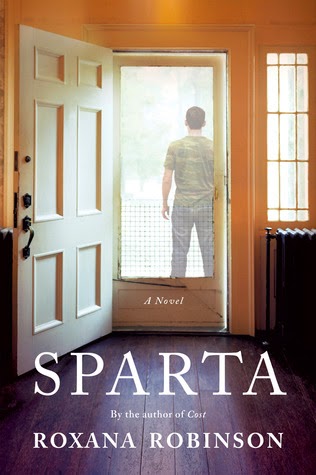 Inspired by the romanticized accounts of war in the ancient world, classics major Conrad Farrell joins the Marines in an attempt to enter into the venerable brotherhood of honor, sacrifice, and courage forged in the heat of combat.  Explaining his decision to enlist, Conrad naively tells his parents, "The classical writers love war, that's their main subject.  Being a soldier was the whole deal, the central experience . . . It seems like it's the great thing.  The great challenge" (22).  And so Conrad goes to Sparta--the nickname for the Marine military base in Haditha, Iraq.  However, he also goes to Sparta in the figurative sense, learning that what gave greatness to the ancient Greek city-state famous for its military might was also the chink in its armor:  when you surrender everything to war, you lose something intrinsic and necessary for the survival of the human spirit.

Sparta is not about Conrad's time in Iraq, although there are several well-written flashback sequences that give us insight into what Conrad endured as a soldier.  Instead, it is a powerful novel focusing on what happens when a warrior returns home.  What is his place when his service is done, when the mission is complete, and when what he found in war was not glory or purpose or righteousness, but waste and hypocrisy?  Roxana Robinson does a superb job of delineating Conrad's slow descent into existential darkness, finding it increasingly impossible to reconnect to an America and a family so materially comfortable and willfully insular that it knows nothing of what his time in Iraq was like.  As he tells his father, "It's hard to describe.  It's like I can't get in here.  It's as though I'm standing outside.  I can see everyone in here, rushing around and doing things, and I can't get in" (240).

Conrad's training as a Marine defines him, leading to a single-minded determination to fight against the anxiety, the fear, and the rage on his own; to seek outside help would be a sign of weakness and failure.  He begins to see himself as a man divided:  there is the Conrad who existed before the war, the one everyone expects him to be, and the soldier who is so defined by combat that he cannot exist in a world without it.  As it becomes more evident that he is losing the battle within himself, Conrad's plight is made all the more distressing when he begins to seek help from a disinterested and unforgivably slow VA.  While I know that many VA clinics are run by compassionate, engaged medical professionals, it is just as true that many are indifferent or ill-equipped to handle the task of treating our veterans.  That any man or woman who has been willing to sacrifice for our nation should have to wait months for needed medical treatment or tolerate a slow-moving bureaucracy is a shameful condemnation of our society's refusal to respect and honor the human cost of war.

Robinson's creation of a soldier's struggle is certainly admirable and, for the most part, surprisingly convincing given that it's written by a female author outside of the military.  Her real strength lies in depicting the complexity of the relationships:  the silent agony of his family, the confusion of his girlfriend, the awkward interactions with former friends, and the painful communications with his fellow Marines (many of whom are also struggling, but valiantly trying to hide it from their former lieutenant).  In particular, the sibling bond between Conrad and his younger brother and sister (a bond forged of shared experience and damaged by Conrad's isolated time outside of that bond) struck me as genuine and authentic.  Robinson is certainly to be commended for the beauty of the writing, as well as the light she sheds on the emotional toll of war.  Despite this, it does sometimes feel a bit too studied, too researched; it doesn't (brace yourselves for what you should have known would be the inevitable Tim O'Brien comparison) make me feel the effects in the way that The Things They Carried does.  And while Robinson is an impressive chronicler of the minutiae of daily life--the ever changing earrings worn by Conrad's sister, the flotsam and jetsam that inevitably end up on the kitchen refrigerator, the festive decor of a Christmas table--such details strike me as decidedly feminine; granted, Conrad's training has taught him to hone in on details, but these still seem like the things that make up the lives of women and might be briefly noted and then discarded as irrelevant by a masculine mind.

A brief history lesson on the Iraq War and on military life in Sparta are awkwardly shoe-horned into the narrative in the beginning, but once Sparta finds its focus in the mind of Conrad, it is a powerful and necessary reminder that not every soldier who comes home without injury is, in fact, whole.
Posted by Amanda at 5:00 AM