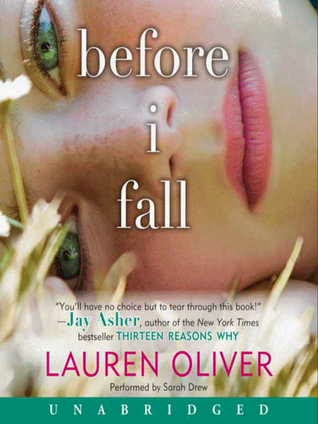 Before I Fall
by Lauren Oliver

Samantha Kingston has it all: the world's most crush-worthy boyfriend, three amazing best friends, and first pick of everything at Thomas Jefferson High—from the best table in the cafeteria to the choicest parking spot. Friday, February 12, should be just another day in her charmed life.Instead, it turns out to be her last.Then she gets a second chance.Seven chances, in fact. Reliving her last day during one miraculous week, she will untangle the mystery surrounding her death-and discover the true value of everything she is in danger of losing.

There were times when I really struggled with this book. The main character, Sam, is awful. Her friends are awful. Her boyfriend is awful. It's so hard to get involved in a book that's populated almost entirely by terrible people. And it took quite some time. I admit that I persisted purely out of stubbornness, and I wouldn't have if the book had been much longer. I also admit that it was, frankly, a relief to be done with this book, because I wouldn't have to deal with Sam Kingston, her awful friends, and her awful boyfriend again.

Here's the thing: Before I Fall is essentially an issue book, and the issue is bullying. But the perspective we get here is from one of the bullies. And the bullies in this book, including Sam, are terrible. Classic Mean Girls stuff. Am I supposed to root for Sam? Feel bad when she dies, over and over again? I don't. I'm not at all sure that I'm supposed to. I feel like Oliver gave me permission to hate her, even to the end of the book. But it isn't entirely about her, not really. It's also about the people she's affected, especially the people she's bullied.

I can get tired of Mean Girls, especially when the Mean Girls are also the popular girls. That just doesn't match my experience in school. The popular girls were popular because (get this!) people liked them. The mean girls had their friends, sure, but they weren't what I would call popular. This is the first book that I've ever read that actually deals with that contradiction between the reality I know and the evil popular girl cliche. Sam and her friends are popular, sure, for a certain definition of popular. People are nice to their faces, sure, and they get invited to parties. But does anybody actually like them? It takes Sam almost an entire week of reliving her last day to realize the answer is, unsurprisingly, no. Very few people actually like them, and that's something Sam needs to recognize and deal with. And you know, I was just so happy that Oliver was acknowledging that people like Sam and their friends wouldn't actually be well-liked, just powerful in a petty sort of way that it helped me get through the book.

That didn't make it easy. I listened on audio during my commute, which might be a good thing. I probably wouldn't have finished if I'd actually read it. Even so, I had to take a day and a half off from listening because I just couldn't take Sam's narration any longer. Not because it was bad, mind you, but because it was too good. It was not fun to be in Sam's head. Maybe, in this case, Oliver did a little too good of a job.
Posted by Sesana at 12:00 AM