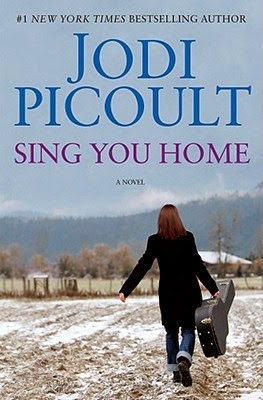 One miscarriage too many spelled the end of Max and Zoe Baxter's marriage. Though the former couple went quite separate ways, their fates remained entangled: After veering into alcoholism, Max is saved in multiple senses by his fundamentalist conversion; Zoe, for her part, finds healing relief in music therapy and the friendship, then romantic love with Vanessa, her counselor. After Zoe and Vanessa, now married, decide to have a baby, they realize that they must join battle with Max, who objects on both religious and financial grounds.

This is the first novel I’ve read by Jodi Picoult. I admire her courage and honesty for tackling such issues as infertility, gay rights, parenthood, and religious beliefs. I read somewhere that Jodi’s own teenage son came out to her while she was writing this book. He’s very fortunate to have such supportive parents.

Zoe Baxter is a music therapist desperate to have a child. Max, her husband of nine years, has his own landscaping business, enjoys surfing, and struggles with alcoholism. Unable to cope with their infertility or mend their broken relationship, he leaves Zoe. Zoe then meets and falls in love with Vanessa, a high school guidance counselor. Zoe still wants a baby, and Max is still not ready for fatherhood, but both parents want what’s best for their embryos left at the fertility clinic after their divorce.

I loved Zoe’s profession as a music therapist. While not very high-paying, she gets to make a difference in the lives of those who suffer from dementia, autism, and mental illness. I imagine this is a very satisfying, yet very emotionally draining career. Vanessa also does well for her young charges, especially depressed and suicidal Lucy, who benefits from Zoe’s music therapy.

The problem here is that Zoe and Vanessa are so perfect in every way. With no flaws, they lacked depth and complexity. Zoe’s agony over her inability to have a baby was heartbreaking, but I also felt deeply for her ex-husband, Max, who felt he was merely being used as a sperm donor.

After the divorce, Max moves in with his Christian brother, Reid, and his wife, Liddy, and finds comfort and peace in their church.

The Christian characters in the story also suffered the same lack of depth, particularly the church officials and lawyers. While it is evident that the author has done extensive research on in vitro fertilization and music therapy, I wish she had been more thorough and fair in her portrayal of Christianity.

A balanced perspective would have made this story much more compelling and thought-provoking.

Zoe and Vanessa marry in Massachusetts and honeymoon at the Highlands Inn in Bethlehem, NH and I couldn't resist checking out their rainbow chairs.