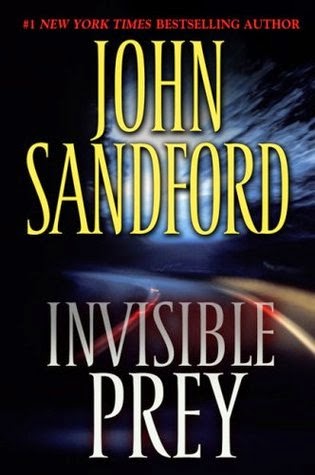 In any long-running series, even one as good as this one surely is, inevitably some books have to be better and some weaker than others, and although I certainly enjoyed reading Invisible Prey, it's not among the best books in John Sandford's Prey series.

In every one of the books, at least thus far, the lead character, Lucas Davenport, and his supporting cast have always been consistently excellent--witty, intelligent, and always a lot of fun to hang out with, even if only vicariously. Given that, these books always tend to rise or fall depending on the quality of the villains involved, and through the years, Sandford has created some truly unique, creepy and compelling bad guys. Unhappily, that's not the case here. The crimes at the heart of the book are fairly pedestrian and the villains are sort of ho-hum, not nearly as capable of engaging the reader or of scaring the living bejeesus out of him or her as is often the case with a Sandford antagonist.

As the book opens, an elderly and very wealthy woman in St. Paul is murdered in her home, along with her maid. The house is chock full of paintings, antiques and other such things, some of which are very valuable and some of which are not. The problem is that there's so much of the stuff that no one knows for sure whether anything valuable is missing. It's possible that some junkie broke in and killed the women, simply looking to score enough loot to finance his next fix, especially since there's a half-way house, filled with offenders, right across the street. Or, of course, there could be something more involved.

As the chief investigator of the Minnesota BCA, Lucas Davenport would not normally be involved in an investigation of this type, but the wealthy victim was politically connected and so the governor puts Lucas on the job. At the same time, Lucas, along with that f***ing Virgil Flowers is involved in the investigation of a state official who may have been having hot, kinky sex with an underage girl. This is a very sensitive investigation politically, and it's a lot more interesting than the murder case.

The plot of the book is somewhat convoluted and involves antiques, quilts, frauds perpetrated against museums, and other such things. The villains are revealed early on and part of the story is told from their point of view. But they aren't all that interesting and they're not all that much fun to watch. The book flags a bit whenever the scene switches away from Davenport to them. Certainly these people don't hold a candle to Clara Rinker or to most of the other Sandford villains.

Again, that's certainly not to say that this is a bad book; it isn't. And even a mediocre book by John Sandford is a lot more fun to read than a lot of other books that one might pick up. I enjoyed the book, but it certainly won't rank among my favorites in the series.
Posted by James L. Thane at 10:12 AM