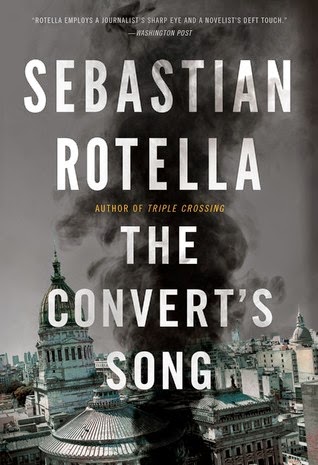 This is a gripping thriller with a "ripped-from-the-headlines" plot that focuses on international terrorism. At the heart of the story are two longtime friends--virtually brothers--named Valentine Pescatore and Raymond Mercer. The two grew up together in Chicago, and Raymond, who loves the glamorous, high-risk life he sees in movies like "Carlito's Way," leads his younger friend into some increasingly dangerous situations. Finally one night, Raymond asks Valentine to back him up as he attempts to rip off a drug dealer. For Valentine, that's one step too far and he walks away.

The two do not see each other again for years. Valentine goes to work for the Border Patrol and later winds up working for a private investigator in Argentina. Then, out of the blue one afternoon as Valentine is at the airport, he suddenly encounters his old friend Raymond. Is this by accident, or has Raymond contrived to engineer the meeting?

The two catch up over a meal and Valentine discovers that Raymond has converted to Islam. But what he's doing these days isn't exactly clear. The two exchange phone numbers and go on their separate ways. Only a few days later, there's a horrific terrorist attack at a Buenos Aires shopping center.

Almost immediately, the evidence points to Valentine's buddy Raymond as a possible mastermind of the attack and of others that are yet in the planning stages. With that the book is off and running as Valentine races around the globe attempting to find Raymond and head off the future attacks he may be planning. Along the way, Valentine hooks up with a sexy French agent and the chase takes them from Latin America to France to Bagdad and beyond.

It's a compelling story, mostly because it has the ring of truth about it--or at least the terrorist plots seem scarily realistic. One might debate whether a lone agent like Valentine could realistically play such a leading role in trying to break up the plots, but that's a minor point, and the story will leave readers glued to their chairs watching the action unfold. This is another solid effort from the author of Triple Crossing.
Posted by James L. Thane at 9:19 AM