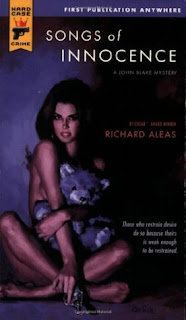 Little Girl ... Found. — Three years ago, detective John Blake solved a mystery that changed his life forever -- and left a woman he loved dead. Now Blake is back, to investigate the apparent suicide of Dorothy Louise Burke, a beautiful college student with a double life. The secrets Blake uncovers could blow the lid off New York City’s sex trade ... if they don’t kill him first.

Richard Aleas' first novel, Little Girl Lost, was among the most celebrated crime novels of the year, receiving nominations for both the Edgar Allan Poe Award and the Shamus Award. But nothing in John Blake’s first case could prepare you for the shocking conclusion of his second ...

I loved getting to know detective John Blake in Little Girl Lost. In crime-ridden New York with lots of people leading double lives, John maintains his innocence and is deeply affected by what he uncovers in his quest for justice.

Three years later, John’ s life is changed. He has abandoned private investigative work and decides to complete his education, so he accepts a job as an administrative assistant for the university’s writing program.

Once again, John becomes involved with a troubled and hurt young woman and once again he sets out to determine the cause of her death, this time an apparent suicide. John, however, believes foul play was involved and once he digs deeper, he learns of Dorrie’s job as a sex worker and uncovers some hard and ugly truths, about others and himself.

This is a mind-blowing and powerful novel with strong, well-developed characters. It gripped me right from the start, and left me breathless until its grim and devastating conclusion.
Posted by Nancy at 8:00 AM