The Detectives of the 87th Precinct Tackle Two Unnerving Cases 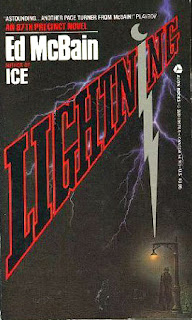 In this installment of the 87th Precinct series, the precinct's male detectives spend their days and nights hunting someone who is killing young women and then hanging their bodies from lampposts around the city. They are assisted in their investigation by Fat Ollie Weeks of the 83rd Precinct and, as always, this is something of a mixed blessing.

Meanwhile, Eileen Burke of the Rape Squad is undercover, attempting to catch a particularly sadistic rapist who continues to attack the same few women over and over again. Burke is acting as a stand-in for one of the victims, hoping that she will be able to decoy the rapist into attacking her and that this will give her the opportunity to arrest him.

As always, the story is well-written; the police procedures are interesting and the by-play among the detectives is entertaining. But there's a certain creepiness factor involved with both storylines that kept me from enjoying the book as much as I otherwise would have. I'm not normally overly sensitive to this sort of thing, but in this case McBain is so good at creating truly repulsive situations that I found myself wanting to cover my eyes at some points. Thus three stars for me rather than four.
Posted by James L. Thane at 11:03 AM