Prague by Arthur Phillips
My rating: 4 of 5 stars

"What does it mean to fret about your fledgling career when the man across the table was tortured by two different regimes? How does your short, uneventful life compare to the lives of those who actually resisted, fought, and died? What does your angst mean in a city still pocked with bullet holes from war and crushed rebellion?" 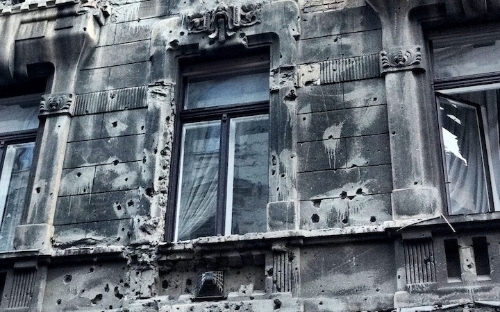 John Price left California for Budapest in search of adventure, but also to reconnect to his older brother Scott. When he was younger, Scott was a fat, unathletic, unhappy kid, but since leaving for Europe, he has sculpted his body and mind into someone very different from whom he used to be. By being around John again all the insecurities of his past come back to nag at the veneer of his new identity.

When I graduated from high school, I moved to Phoenix to go to college. I can still remember waking up that first morning in Arizona and thinking to myself I don’t know a single soul in this city. I was elated. I could finally be me. Growing up, especially in a small farming community, everyone knows everything about you. They have these disjointed ideas of who you are that have been formed from the shedded skins of your younger self. You have no control over what they decide to remember (or exaggerate) about you, and to ever escape those older versions of yourself is impossible. I wish I’d been able to flee to a vibrant European city like Budapest but I had to settle for Phoenix.

Scott does introduce John to his group of ex-pat, pseudo-intellectual friends. In the midst of them is a corn fed, patriotic to the bone woman from Nebraska named Emily. There is also Charles, an investment banker, who in the course of the novel puts together a deal to bring the historic Horvath press back to life. ”There was something incorrect about this boy. His smile and word of thanks were wrong. He was made of dirty mirrors.” There is Mark, a Canadian, in love with architecture and the past. ”Can you imagine standing right here and being in love and seeing the world how it looked before movies existed, before movies made you see everything a certain way?”

As John settles into the city and starts to make a name for himself as a journalist working for BudapesToday, he begins to put together a life of his own. He finds an apartment, absurdly cheap. ”The balcony’s floor was cracked in a map of meandering rivers, demarcating flakes, and slabs of concrete loose enough to lift. It seemed evident that eventually the balcony would collapse under its own, or someone else’s weight. The building’s exterior walls bore decades-old scars and bullet holes.” The original owner leaves a picture of his wife and asked that John not take it down. This picture becomes a talisman of the apartment to the point that she almost seems like a part of John’s own past.

He meets a colorful Hungarian woman named Nadja at a bar who tells him stories of her past. She has been forced to leave Budapest too many times but always comes back when sanity has returned. John takes Emily to see Nadja in the hopes of impressing her, but Emily can not believe that someone has had that many experiences. To John those stories are wonderful pieces of culture history. To Emily they are just lies.

As I skimmed some other reviews of this book, it was interesting to see the reactions to these twenty something characters who are all very intelligent, who have just read enough, seen enough, to formulate what they feel are informed opinions, but of course they are just on the beginning edges of actually knowing what they are talking about. The people who gave this book one star because they loathed the characters I believe missed some of the point of the book because Arthur Phillips is very hard on these people. He exposes them. He certainly does not romanticize them. I identified with many aspects of these characters. The flaws they display are certainly ones that I could attribute to my past self as I grappled with knowledge, trying to evolve beyond just being smart into someone with actual intelligence. 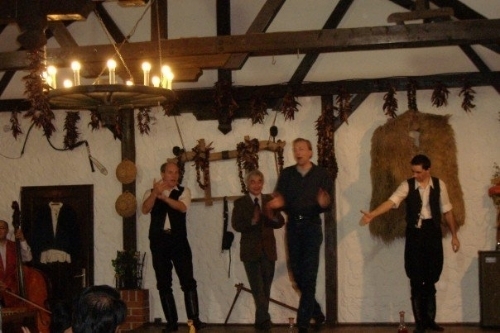 I must warn you about travelling to Budapest. I did have to dance for my supper.

The one star reviews seemed intent on punishing a writer for creating characters they’ve met versions of in real life and didn’t like. Many of them admitted, begrudgingly, that the lyrical writing is at times awe inspiring. Phillips also displays a depth of understanding of the human condition that had me rereading and thinking about passages such as this:

”John understood that some things mattered and some things did not and that the happy people in this world were those who could easily and rapidly distinguish between the two. The term unhappiness referred to the feeling of taking the wrong things seriously.”

I must admit though I really didn’t like Emily. She is so square, so judgmental, and certainly someone who would give this book a one star rating. She certainly wouldn’t like the direction her character takes, a direction she would have thought was impossible.

Luckily, John meets the plucky, bald headed, artist Nicky who makes him really see things, and forces him to expand his thinking about what he really wants out of life. She has her thorns certainly and is always looking to fortify the voracious hunger of the creative monster. ”John, not knowing the topic under discussion, knew she was collecting garbage to feed her ravenous, drooling Muse, and loved her for her open use of people, even himself.”

Phillips also weaves in the history of the Horvath Press and the heritage of the current owner, Imre. The Press survived war, poor ownership, and anticipated the changing tastes of the Hungarian population. The books he published saved the cultural history not only of his city, but also of his country. ”This was Hungary, and Imre was its memory. For some, the book acted almost as an opiate: The pleasure of leisurely or impatiently traveling from page to page and seeing lovely Budapest unbombed, undamaged, in black and white, was almost pornographic in its unattainable, voluptuous gorgeousness. Lipotavaros, the Elizabeth Bridge, the Corso, the Castel, the Nyugati Station in the day of its inauguration--the day it was the largest, cleanest train station in the world….”

Towards the end of the book the First Gulf War breaks out. Mark becomes absolutely addicted to CNN, which was the station that first gave us the twenty-four hour news cycle. I was working at Bookman’s Used Books in Tucson at the time. We brought a TV up to the front of the store so that we could get updates as the war unfolded. The war was over so quickly that it almost felt like a movie with too abrupt an ending. Like most of America, for quite a while, I continued to be addicted to news. My obsession with play-by-play news cooled a long time ago as I discovered that news is too influenced by half lies, hidden truths, and political agendas. 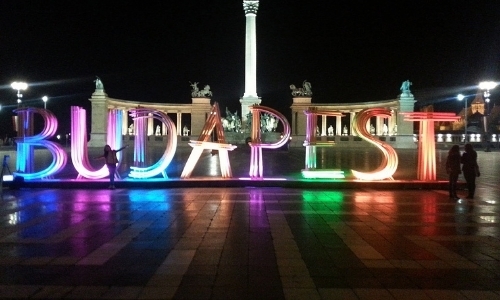 Maybe there is some fascinating reason why Phillips decided to call this book Prague, but I actually find it annoying. Almost all the book is set in Budapest, so logically the book should bear the name of that city not the sister city on the Danube who has always been considered more elegant, more interesting. It has been a long time since I’ve been to Vienna, Budapest, and Prague, but I remember mimosas for breakfast in Vienna, a wonderful vibe in Budapest, and the breathtaking beauty of Prague. Each city was easily explored on foot and provided new wonders around nearly every corner. I can’t recommend that tour enough.

You may not like the characters, but I will say that no one remains twenty forever, and most pseudo intellectuals eventually discover how much more there is to know than what they can ever know. They grow up, and most become more humble. They take hard knocks just like the rest of us do and soon realize the universe doesn’t play favorites. With time, they become less self-absorbed and start to realize the benefits of using their intellect to help people instead of using it to offer a pithy evaluation of others' shortcomings. You might like these people better in their forties, but until then don’t bother to hate them. The wax of their character is still being poured into the mold.

Posted by JEFFREYKEETEN at 11:12 AM