Rubble and the Wreckage 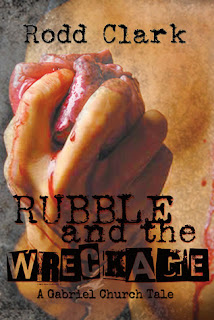 
Gabriel Church knows you can’t take a life without first understanding just how feeble life is, how tentative and weak it stands alone. If you desire murder, you hold a life in your hand. Whether you release it to grant life or grip tighter to end it, it is at your command and discretion.

Gabriel is a serial killer with a story he wants told.

Christian Maxwell studied abnormal psychology in college but chose instead to focus on a career in writing. His background comes in handy when he thinks of writing about a serial killer. He can’t think of anyone more qualified to write the story of Gabriel Lee Church, and do so in the murderer’s own words. It’s been done before, but never with a killer who has yet to be captured or convicted.

There was never anything more than a gentleman’s understanding between the two men that Christian would record Gabriel’s life story. The killer did not ask for his complicity in any crimes, nor did he ever ask for his silence. Christian’s interest in the man, though, is fast becoming something more than academic. When the writer and his subject become unexpected friends and then lovers, the question remains: What is Gabriel’s endgame . . . and why does he want his story told?


Can a man who has killed 40 people without a shred of remorse fall in love?

Can the socially awkward writer of his story separate his growing feelings for the killer from his ghastly deeds?

Christian Maxwell is a very smart guy. He’s college educated, has a way with words, and has exceptional research skills. By finding patterns in random killings around the country, he comes to the conclusion that they are the work of one man.

Gabriel Church is not well educated, but he is very shrewd, confident and charming. He is adept at reading emotions and body language, skilled at persuading people to his way of thinking, pursues his goals with ruthless determination, and so far, has eluded capture.

When the two men meet at a coffee shop and begin the work of recording Gabriel’s life and crimes, they are gradually changed in unexpected ways.

While I enjoyed the premise of this novel, the execution failed in many ways. Very little dialogue and lots of internal monologue really slowed down the story for me, causing me to abandon the book for an entire week. I enjoyed being privy to Christian’s and Gabriel’s thoughts and learning their history. I just wished the author had a better way of including their backstory while building dialogue and suspense to increase the pace of the story and make it more interesting for the reader. Grammatical errors, spelling errors, repetitive sentences, and awkward phrases abound. I believe this novel could have been an exceptional one if it had been fine-tuned by a good editor.

Nevertheless, I do not regret reading this. The story captured my interest and ended conclusively and plausibly, with no frustrating cliffhangers, or dangling loose ends. I am not convinced that Gabriel Church can change, but I am curious to see how his character develops and whether his story will be written.
Posted by Nancy at 11:00 AM