THE TURN OF THE SCREW BY HENRY JAMES

The Turn of the Screw by Henry James
My rating: 5 of 5 stars 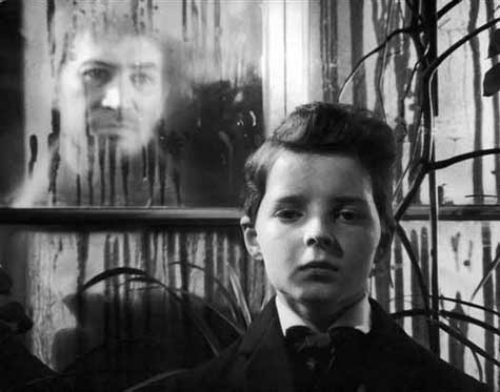 Screen shot from the 1961 version of The Innocents based on the James short story.

A governess is hired to look after the nephew and niece of a man who has inherited the responsibility for the children after the death of their parents. He is very explicit in his instructions to the governess that he is not to be bothered with excessive communications. The governess is young and pretty and wants to impress her new employer by doing exactly what he wishes. She wants to be seen as competent, and in a sense this need to please proves to be a vulnerability that, as she tries to shield and protect, she actually puts everyone at more risk.

That becomes the unknown element of the story. The reader doesn’t really know what to be afraid of. What nature of evil are we dealing with?

The children are ethereally beautiful. The governess is compromised immediately by preconceived notions, that we all have to a certain extent, that beauty equates to goodness. ”I was dazzled by their loveliness.” When the boy Miles is kicked out of his exclusive school for unrevealed reasons, the governess cannot fathom what he could have possibly done to deserve this level of embarrassing punishment. It was inconceivable to her that he was capable of anything remotely improper.

As the governess begins to try to understand her young charges, she also begins to discover that there are swirling questions about what has happened to other people who have been associated with the children in the past. She cross examines the housekeeper and more carefully the children, ferreting out bits and pieces of information that leave a murky picture in her mind. The reluctance which everyone shows in speaking about the past makes the governess more and more suspicious that something potentially perplexing lies in the truth.

She starts to see dead people.

”I was ready to know the very worst that was to be known. What I had then had an ugly glimpse of was that my eyes might be sealed just while theirs were most opened.”

Her first thought was to protect the innocence of the children, but maybe what she should have been more worried about was protecting her own innocence. It becomes a game of ignoring these phantoms in the hopes that the children would not become aware of the existence of these ghosts, of Quint, the butler, and Miss Jessel, the ex-governess. Both of these people were obsessed with the children when they were alive. The question becomes what do they want with the children now?

Of course, without confirmation of the existence of these supernatural events from other people, one does naturally tend to start questioning one’s own sanity.

Henry James weaves in these awkward interactions between the governess and Miles. There are moments when the young lad seems to be attempting to seduce his governess. He calls her ‘my dear,’ which sounds innocent enough, but when coupled with innuendos, the words take on a more unseemly connotation. The governess is not totally immune to the charm of the handsome boy. “Of course I was under the spell, and the wonderful part is that, even at the time, I perfectly knew I was. But I gave myself up to it; it was an antidote to any pain, and I had more pains than one.”

Scholars have debated whether the governess was actually seeing the phantom manifestations or not. There is certainly a desperation to how she attempts to protect the children, fully determined to keep the situation under control without having to contact her employer. We watch her naivety crumble as she is battered by the strange and distant attitudes of the children and the extraordinary circumstances of the spine-chilling past intruding on the present. I was firmly on the side of believing the governess was losing a firm grasp on her sanity, but then James throws a wrinkle into my firm resolve when Miles makes this statement to the governess that they should not miss his sister and the housekeeper (after they have fled the circumstances):

”I suppose we shouldn’t. Of course we have the others.”

Or is Miles just playing her.

This is a short story, but it is a short story by Henry James. He has some of the same convoluted, difficult sentences that show up in his novels. They may bewilder on a first read, but after another go they start to make more sense. I’ve read enough James to find those complicated sentences, when they appear like Gordian Knots, more amusing than frustrating. This tale left me jangled and apprehensive as if an apparition were still strumming their fingers along the length of my sciatic nerve. If you read it on the most basic level as a ghost story, you will certainly find it unsatisfying. As I started to understand the deeper psychological implications of the interplay between characters, I started to realize that this is a tragedy with elements of horror that left lasting traumatic issues for those that survived.

Posted by JEFFREYKEETEN at 8:43 AM