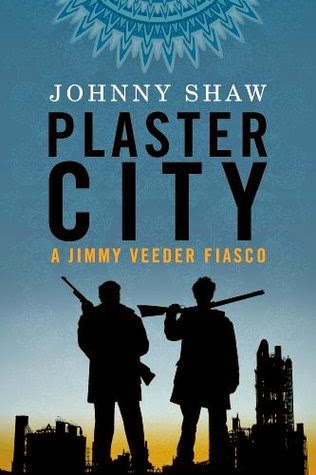 Anthony Award winner Johnny Shaw returns to the Imperial Valley (“as far south and as far east as you could go in California”), for another Jimmy Veeder Fiasco. Shaw introduced Jimmy in 2010's Dove Season, and it's great to have him back.

The Imperial Valley is hard desert country full of tough, resilient people. It's a difficult place in which to try to eke out a living, but having returned home and taken over the family farm, Jimmy is determined to make a go of it, to provide for his family and to be as good a father as he can for his young son.

The biggest stumbling block in the path of Jimmy's road to solid citizenship is his long-time best friend, Bobby Maves. Bobby is recently single again, partying harder then ever, and all too often calling Jimmy in the middle of the night, luring him out of his home and away from his responsibilities, to go on another "Mavescapade." These adventures always involve a great deal of drinking, more than the occasional bar fight, and assorted general mischief such as "borrowing" a police car for a joyride. The hilarious opening chapter, which details the development of one such evening, is worth the price of the book all by itself.

As the story opens, Jimmy and Bobby are roused from a night of debauchery by the news that Bobby's sixteen-year-old daughter, Julie, has gone missing. Bobby barely knows the girl; he and Julie's mother, Becky, had a brief fling, and Bobby didn't know until a good deal later that he even had a daughter. Now that Julie is missing, though, Becky reaches out to Bobby for help and Bobby, in turn, reaches out to his best friend.

Bobby's idea of looking for his daughter seems to consist of creating the maximum amount of mayhem and seeing what shakes out. Julie has fallen in with a very bad crowd, and Bobby's basic plan is to beat the crap out of everyone she hung with until he finds out where she is. Jimmy tries to moderate Bobby's violent streak and take a more sensible approach to the search, but that ain't gonna happen.

Throughout the book, Jimmy is torn between his responsibilities to his own family and those he owes to Bobby, who has been his best friend since grade school, and a major theme of the novel involves the ties and the sometimes competing obligations that a person has to his family and to his friends. Being the best friend of a man like Bobby Maves is no picnic at times, and Jimmy is forced to make some impossibly hard choices.

As the search for Julie continues, both the violence and the hilarity escalate. There are some pretty serious villains in this book and some truly disturbing developments. But Shaw has a gift for walking a very fine line between humor and the genuinely darker side of life, and the result is a story that is often hilariously funny while at the same time extremely scary and often very touching.

In addition to being the author of three great novels, Shaw is also the editor of Blood & Tacos and the creator of another fantastic character, Chingon, "The World's Deadliest Mexican." It's clear that he knows the Imperial Valley and its people very well and that he has a deep affection for both. He's also a very talented writer who has created here a violent, bloody, drunken, rollicking adventure. Jimmy Veeder is a great character, and while I don't think I'd like to have Bobby Maves for a best friend myself, I'm eagerly looking forward to Jimmy's next fiasco.
Posted by James L. Thane at 10:11 AM