Leviathan Wakes by James S.A. Corey
My rating: 4 of 5 stars

”Way I see it, there’s three ways this can go,” Miller said. “One, we find your ship still in dock, get the meds we need, and maybe we live. Two, we try to get to the ship, and along the way we run into a bunch of mafia thugs. Die gloriously in a hail of bullets. Three, we sit here and leak out of our eyes and assholes.” 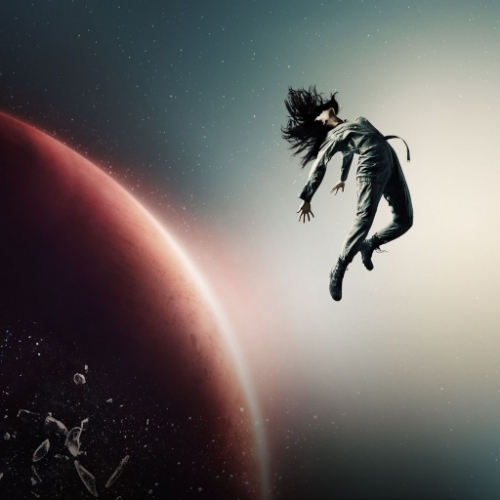 Well, really, the story begins when some alien species shoot a payload of virus at Earth and misses. This virus is capable of turning the human race into piles of nasty, smelly biosolids. Luckily for Earth, this contagion from space gets caught in Saturn’s rings which keeps it from ever reaching its intended destination.

Holden is the second in command of an iceberg hauler. When he sees his ship Canterbury blown into dust particles by pirates, while the ship was trying to respond to an SOS, his world is suddenly expanded and contracted. Expanded by the beginning of a conflict that will spread across the known universe, but his world has also contracted down to the confining corridors of the small ship that he and his remaining crew members are trying to keep afloat.

The universal conflict might be more than a little bit Holden’s fault. He broadcasts out to the world the existence of incriminating evidence that Mars might have had something to do with the pirates. The writers behind the name James S. A. Corey might be making a point about the misuse of disseminating wrong information on the internet. How many people believe it even when it doesn’t make sense?

This section of the universe is shared between Earth, Mars, and what are called the Belters. Belters are people born in the asteroid belt. The Belters are generally taller, fitter, and tend to bastardize language much the same way as immigrants to America bastardized English. I kind of think of Holden as Gavrilo Princip, the man that touched off WW1 by assassinating Archduke Franz Ferdinand. Holden meant well; to him information is meant to be shared so that it can be analyzed and expounded upon. People unfortunately jump to conclusions without examining the evidence too closely, especially when the potential for war has been brewing for some time. The major powers in the universe are just looking for the right catalyst to start a war. Holden, inadvertently, provided the match.

”The moral complexity of the situation had grown past his ability to process it.”

So there is some lethal goo out there trapped in the rings of Saturn. Knowing humans to be the “curious monkeys” that they are... what do you think happens next? Yeah, they just can’t help poking a stick at it.

Things go from bad to worse in a hurry.

Okay, maybe just a bit more because there are more stages to this thing.

”A flock of softball-sized spiderlike things crawled through the corridor, leaving a slick sheen of glowing slime behind them. It wasn’t until he paused to knock one off the cart that he recognized them as severed hands, the trailing wrist bones charred black and remade. Part of his mind was screaming, but it was a distant one and easy to ignore.”

As a counterweight to Holden is the cop Miller. He sees the world through rose murky colored glasses. He has seen the worst of people, so he doesn’t need to speculate about what people are capable of. He is on the case of a missing rich girl, and even after he is fired from his job, he continues to hunt for her. It turns out she is connected with the OPA, a Belter resistance group, and also she is somehow mixed up with the goo from space.

Miller hooks up with Holden and his crew, but it is an uneasy alliance. Holden’s righteousness and Miller’s cynicism mix like oil and water, but actually with the universe hanging in the balance their differing views create a middle which is generally where the right answers can be found.

So pull up a bowl of fungal curds and a cup of something that tastes close to coffee and have a blast watching the crew of the Rocinante cartwheel across the universe barely surviving one disaster after another as they do everything they can to stay alive and save the world.

The SyFy Channel has just launched a new series called Expanse that is based on the universe created by Daniel Abraham and Ty Franck in this series of books. I haven’t watched the episodes yet because I really wanted to read the first book before watching any part of the TV series. If I have a complaint about the book, it is that it does feel a bit bloated, but the fact that it is unapologetically calling itself a space opera I feel kind of snarky even broaching the subject. The world building is fascinating, and from what I have read, the books will continue to add pieces to this world as the book series progresses. I have plans to read at least two more.

One last little tidbit from Miller which I found rather funny as I’m holding this 16 pound trade paperback novel in my hands: ”The OPA man, Anderson Dawes, was sitting on a cloth folding chair outside Miller’s hole, reading a book. It was a real book--onionskin pages bound in what might have been actual leather. Miller had seen pictures of them before; the idea of that much weight for a single megabyte of data struck him as decadent.”

I just blew you a raspberry Miller.

Posted by JEFFREYKEETEN at 9:38 AM