IN THE HEART OF THE SEA BY NATHANIEL PHILBRICK

In the Heart of the Sea: The Tragedy of the Whaleship Essex by Nathaniel Philbrick
My rating: 5 of 5 stars

”I turned around and saw him about one hundred rods [500 m or 550 yards] directly ahead of us, coming down with twice his ordinary speed of around 24 knots (44 km/h), and it appeared with tenfold fury and vengeance in his aspect. The surf flew in all directions about him with the continual violent thrashing of his tail. His head about half out of the water, and in that way he came upon us, and again struck the ship."
—Owen Chase, first mate of the whaleship Essex.

“There she blows!” was as much a part of my vocabulary as a child as “Launch the torpedoes” or “Geronimo” or “Remember the Alamo.” I wasn’t using it correctly, as I was not hunting whales in the middle of Kansas, but I did use it as a rallying cry for a charge against my childhood chums as we chased each other from one end of the farm to the other. Of course, in 1820 when a sharp eyed lad in the crow’s nest spotted a spume on the horizon, he would yell down to his crew mates, “There she blows!” and the chase would be on.

The Nantucket ship Essex was commanded by a newly commissioned captain by the name of George Pollard. The ship, an old vessel, had always been thought of as a lucky ship, given that it had returned so many profits to the owners. Much of the crew was green and were on their first whaling voyage. The ranks of Nantucket sailors had been filled out with some African Americans and some men referred to as offshore men, meaning that they were not of Quaker Nantucket stock.

Early in the voyage, they hit a squall that nearly heels them over. “For the green hands, the sound alone was terrifying: the shrieking of the wind across the rigging and then a frenzied flapping of sails and creaking of the stays and mast.” Can you imagine that sound? I’d be convinced that I was about to perish, especially when the ship begins to list. Captain Pollard does not spring into action as quickly as he should, but does finally give the right orders, and the good ship Essex rights herself.

It was a foretaste of what was going to be a disastrous journey.

In the 19th century, over 200,000 sperm whales were harvested for their spermaceti. (770,000 in the twentieth century. We always improve at killing things.) A normal sized whale will have about 500 gallons of this semi-waxy substance in their heads. When exposed to air, it turns to a semi-liquid and looks...you guessed it...like sperm. This oily substance was used to lubricate machinery during the industrial revolution and to light lamps. Eventually, this oil was replaced by lard and then by petroleum, which probably saved the sperm whale population from extinction. Yea, petroleum industry! The whalers also harvested the ambergris from the digestive tract of the whale, which was used as a fixative in perfume. Women didn’t know it, but when they sprayed those beautiful scents on their necks and wrists, they were also spraying whale digestive juice on their carefully coiffed skins.

A sperm whale, what a beauty!

In this era, they did not have harpoons that are shot out of a cannon; they had to row right up next to the whale, and someone with the right skill and strength thrust the harpoon into the side of the whale. These are large mammals, the largest toothed whale, reaching upwards of 80 feet long (now only about 65 feet which has been attributed to the excessive hunting of the largest males who, therefore, did not have a chance to pass on their genes.) and weighing 45 tons. They also have the largest known brain of any extinct or modern animal weighing in at 17 lbs. If they can avoid the harpoons of man and keep out of the reach of Orcas, they can live up to 70 years. Once the harpoon was in the whale, the sailors became the fastest moving humans on the planet as the whale would try to escape by fleeing at upwards of 27 mph while pulling the boat and crew along with it.

It is about finding that sweet spot in the harpoon so it is balanced perfectly in your hand. You can smell the whale. You can hear the grunts, groans, and farts of the rowers as they try to keep you level with the creature. Your face is slick with whale spume and sweat. You know you might only have one chance at this. You let go the thunderbolt in your hand and hope you will hear the meaty impact of a man killing a god.

It wasn’t unusual for green hands to upchuck over the side as they watched the death of a whale. Nathaniel Philbrick gives a description below that left tears stinging my eyes. There is something so majestic about a whale that even the most primitive thinkers among us must feel on some level that killing a whale is an affront against a higher power. When you kill something larger than yourself, something that displays such intelligence, you have to feel the world has been diminished.

”When the lance finally found its marks, the whale would begin to choke on its own blood, its spout transformed into a fifteen-to twenty-foot geyser of gore that prompted the mate to shout. ‘Chimney’s afire!’ As the blood rained down on them, the men took up the oars and backed furiously away, then paused to watch as the whale went into what was known as its flurry. Beating the water with its tail, snapping at the air with its jaws--even as it regurgitated large chunks of fish and squid--the creature began to swim in an ever tightening circle. Then, just as abruptly as the attack had begun with the first thrust of the harpoon it ended. The whale fell motionless and silent, black corpse floating fin-up in a slick of its own blood and vomit.” 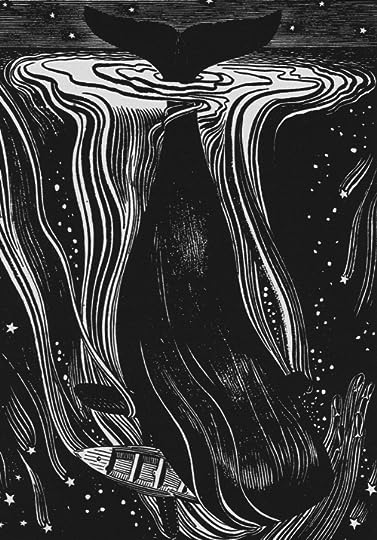 As I was looking through Rockwell Kent’s art for Moby Dick, I was surprised how well I remembered each of the sketches even though I haven’t read the book for decades.

So they take the oil, some blubber, and the ambergris; those parts had ready value that made Nantucket in the heyday of the whaling era very wealthy. ”The rest of it---the tons of meat, bone, and guts---were simply thrown away, creating festering rafts of offal that attracted birds, fish, and, of course, sharks. Just as the skinned corpses of buffaloes would soon dot the prairies of the American West, so did the headless gray remains of sperm whales litter the Pacific Ocean in the nineteenth century.” As I was reading this, even before Philbrick brought forth the comparison to the eradication of the buffalo in the same century, I was having flashbacks to Butcher’s Crossing by John Williams.

I had to stop and go read something else for the rest of the day. I needed a break to absorb what I had read and also to create some distance between myself and the horrifying images of whales dying that Philbrick so vividly shared with me.

As I did with the buffalos in Butcher’s Crossing, I also found myself rooting for the whales.

Something triggered in one whale, a monster 85 foot creature, who instead of fleeing from these puny humans turned around and crashed into them. ”Instead of acting as a whale was supposed to---as a creature ‘never before suspected of premeditated violence, and proverbial for its inoffensiveness’---this big bull had been possessed by what Chase finally took to be a very human concern for the other whales.” 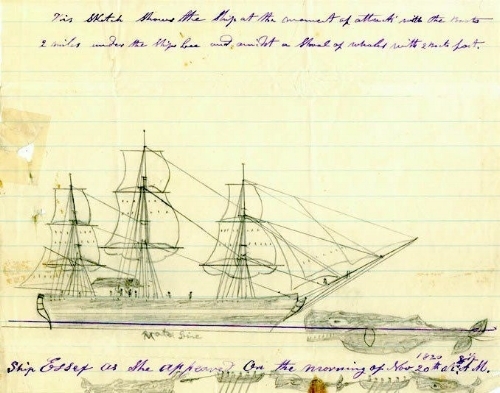 Thomas Nickerson, the cabin boy and youngest member of the crew, drew this sketch of the attack.

This St. George of the deep, more dragon than man, with two mighty thrusts with his head turned the Essex into a splintered, sinking wreck. This story of the Essex is what so famously inspired Herman Melville to write his masterpiece Moby Dick. A commercial failure when released, over time has proved to be a canon of American literature. The story of the Essex has continued to be taught in American History classes, inspiring children with the tale of survival. Moby Dick may not appear on many high school syllabuses anymore. The daunting 600+ page count is simply too much for the curricula of the school system, but I did see it appear on a college syllabi not too long ago; unfortunately only excerpts were being studied.

The survival of eight crew members out of a total of twenty is harrowing indeed. A new captain used to taking orders instead of giving orders listened to some bad advice from his first and second mates. 95 days in a boat could have been shortened to mere weeks if he had stuck to his original thinking. There are some interesting discussions about the demise of all the black sailors and of most of the offshore men. In fact, the only three offshore men who survived are the ones who opted to stay on an island rather than continue in the boats. The Nantucket men stuck together, and all five who stayed in the boats who survived were Nantucket men.

Philbrick will describe the effects on the body, experiencing extreme thirst and the metabolic rates. Women and older people with lower metabolism actually do better in cold water or in cases of extreme hunger. As gallant as vigorous men like to be, giving extra rations to women and older people, they actually, logically, should be keeping those rations for themselves. Men with high muscle content, who naturally need more calories, will suffer the quickest loss of mass and will die first.

Captain Pollard is older and slightly rotund, which gives him an advantage over the younger, leaner sailors. As food and water disappear, they must resort to the most desperate of measures. ”The men were not much more than skeletons themselves, and the story that would be passed from ship to ship in the months ahead was that they were ‘found sucking the bones of their dead mess mates, which they were loath to part with.’”

There is a 2015 movie based on this book that is also called In the Heart of the Sea starring Chris Hemsworth, Benjamin Walker, and Cillian Murphy. 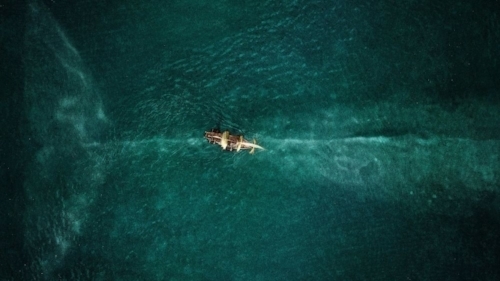 I love the visual that the movie poster conveys.

Posted by JEFFREYKEETEN at 9:40 AM