HHhH by Laurent Binet
My rating: 4 of 5 stars

”This is what I think: inventing a character in order to understand historical facts is like fabricating evidence. Or rather, in the words of my brother-in-law, with whom I’ve discussed all this: It’s like planting false proof at a crime scene where the floor is already strewn with incriminating evidence. 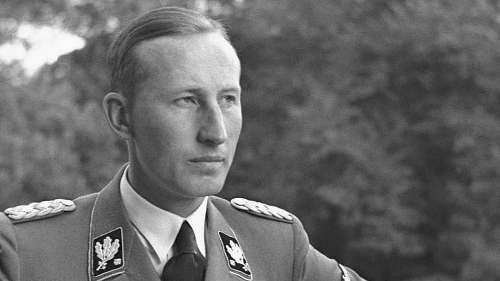 I don’t know how to describe him any other way except that he has a punchable face.

This is a book with a plot ensnared in the arduous process of conceiving a historical novel. Laurent Binet is writing about the assassination of the Nazi Reinhard Heydrich and the men who killed him in Prague. Binet shares with us the concerns he has with taking too many liberties with what is known truth and what are his reasonable speculations. Was Heydrich riding in a forest green car or was it black? Does it matter?

His girlfriend Natacha reads the chapters as he writes them. She is involved in the process to call him to task whenever he breaks one of his own rules about writing historical fiction. ”When she reaches the second sentence, she exclaims: ‘What do you mean, “the blood rises to his cheeks and he feels his brain swell inside his skull”? You’re making it up!’”

He sheepishly deletes the line, but then later in the day he puts it back in because every other line he tries to replace it with lacks... precision. Oscar Wilde has that famous quote regarding this exact predicament: “I was working on the proof of one of my poems all the morning, and took out a comma. In the afternoon I put it back again.”

Of course, Binet doesn’t know exactly how Heydrich may have reacted to a piece of bad news, but he does know that, given what he has read about him, more than likely anger, dark consuming anger, is the only way that someone, especially as disturbed and self-absorbed as Heydrich, could react. He was picked on as a child. He was called ‘the goat’ due to his appearance and his awkward sounding voice. The anger against humanity could have begun there. The question is, did his childish tormentors create him or did they sense on some feral level that he was going to be the architect of something evil? No one could have guessed the magnitude of the holocaust that he was going to unleash. He acquired many more nicknames once he found his home in the Nazi party: ”the Hangman, the butcher, the Blond Beast, and---this one given by Adolf Hitler himself---the Man with the Iron heart.”

The Nazi party attracted the outcasts, the angry, the perverted, and the brilliantly demented. They were men who wanted to have power over people and dreamed up creative ways to hurt them, but even among them, Hitler had to look for a man cold and calloused enough to exterminate legions.

Reinhard Heydrich was the perfect man for the job.

I want to return for a moment to Binet’s struggles with speculating about Heydrich’s physical reaction to a particular piece of bad news. Nonfiction in many ways fails to tell the truth by the very process of stripping away all the elements that are not known. We know that things are discussed, but usually those dialogues are not recorded for posterity. A good writer will read everything he can find on a historical person he plans to use in a novel. She will read everything she can find about the period. He will read letters and diaries to glean bits and pieces of information that will lend more authenticity to his novel. She will know the type of pen that was in the hand of a letter writer or the shapes of stains on the walls of a prison cell or the color of frilly underwear a mistress wore for her German lover.

When a writer has done this much research, he knows instinctively (although still subjectively) how a historical figure will react to a situation. Reasonably accurate dialogue can be written, most assuredly better written than the original discussion. The point of historical fiction is to make people come alive more than what can be accomplished by staying strictly within the facts of what is known.

I do appreciate it when a fiction writer does not alter events known to be true. Though even that I can forgive if they notate those deviations in the forward. 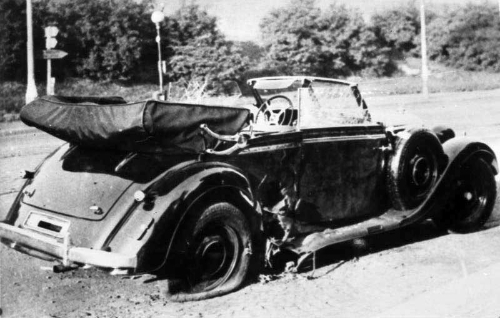 Was the car dark green or was it black?

Reinhard Heydrich is a man ripe for assassination. He is careless and frequently seen riding around Prague in a convertible car without bodyguards. The people who know him despise him, and the rest of the world would, too, if they knew what he was doing. ”Heydrich is well aware that everyone considers him the most dangerous man in the Reich, and it’s a source of vanity for him, but he also knows that if all the Nazi dignitaries court him so insistently, it is above all to try to weaken Himmler, his boss. Heydrich is an instrument for these men, not yet a rival. It’s true that in the devilish duo he forms with Himmler, he is thought to be the brains. (‘HHhH,’ they say in the SS: Himmlers Hirn heisst Heydrich---Himmler’s brain is called Heydrich.’), but he is still only the right-hand man, the subordinate, the number two.”

He is dangerous because he is ambition twined with ruthlessness.

Binet will introduce us to the assassins. They are men from Czechoslovakia and Slovakia, who are willing to risk their lives parachuting back into enemy territory to kill a man responsible for so much misery. As he gets to know them, he becomes attached to them. He wants to save them. He wants to write their life after their acts of heroism. He could create a hidden door that will allow them to escape. He could change the circumstances and give them a chance to fight their way clear...but then that would be breaking the rules. 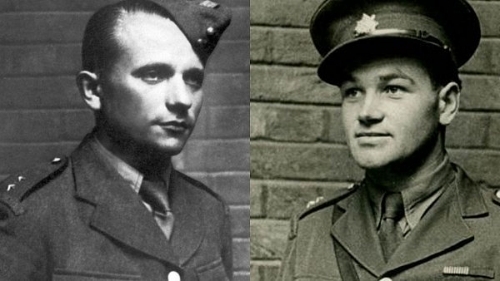 Jozef Gabčík and Jan Kubiš, young men who proved too much for Heydrich.

I remember years ago H. W. Brands, who frequently shows up on the History Channel, was discussing the death of Lincoln. He must have been researching him for his Ulysses S. Grant biography, but one of the things that he talked about that really stuck with me was that he found himself tearing up as he wrote about the assassination of Lincoln. That event that he knew so well still inspired an emotional reaction in him that caught him by surprise. As writers, we would love to write a new ending, but of course, in the case of Lincoln, he couldn’t have died at a better time to insure his legacy.

This book was a constant struggle to write. Binet tries to adhere to his own self-imposed rules. He questions everything he has written. He wants to do it right. His perspective outside of the novel shifts. I can relate to that. I question my life all the time. Why do I do this? Why don’t I do that? Is what I write really worthwhile? Will someone see through the facade and ridicule me? Am I worthy of the subject?

”When I watch the news, when I read the paper, when I meet people, when I hang out with friends and acquaintances, when I see how each of us struggles, as best we can, through life’s absurd meanderings, I think that the world is ridiculous, moving, and cruel. The same is true of this book: the story is cruel, the protagonists are moving, and I am ridiculous. But I am in Prague.”

I am frequently ridiculous.

I want to close with one last quote from Binet about the responsibility that writers feel for those they leave in the shadows.

”Worn-out by my muddled efforts to salute these people, I tremble with guilt at the thought of all those hundreds, those thousands, whom I have allowed to die in anonymity. But I want to believe that people exist even if we don’t speak of them.”

Sometimes though, a writer can pluck a person, let’s say one who is buried in an unmarked grave with 33,771 other Jews in Kiev, and sheath him in flesh, pump blood into his veins, and free his tongue so he can tell a story left untold.

Posted by JEFFREYKEETEN at 10:26 AM