The Mathews Men: Seven Brothers and the War Against Hitler's U-boats by William Geroux

The Mathews Men: Seven Brothers and the War Against Hitler's U-boats by William Geroux
My rating: 5 of 5 stars 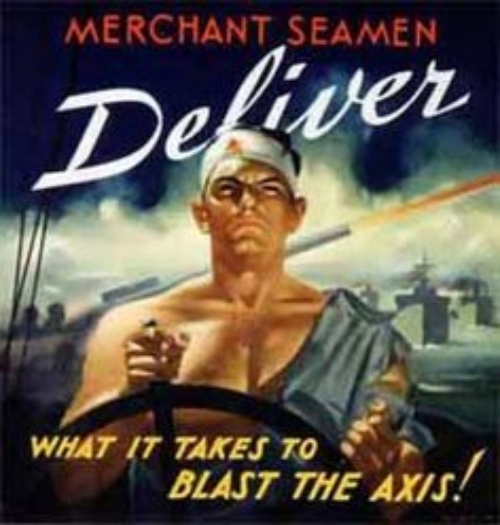 All a man from Mathews County, Virginia, had to do to get a job on a ship was to mention to the person in charge of hiring where he was born. They were not only well respected seamen, but were also expected to rise up the chain of command quickly to become captains. When World War II broke out, many were already serving on ships, but soon most of the men of Mathews County were serving in the Merchant Marine. There were five families who contributed almost every available male to the war: the Hodges family had ten men serving, the Callis family also had ten, the Hudgins family had seven, the Hammond family had three, and the Respess family had two. A predominant number of those men had Captain in front of their name before the end of the war. Many of them never made it home.

”For ten months after Pearl Harbor the U.S. Merchant Marine had kept the war from being lost. They had kept Britain supplied with the oil, munitions, and food needed to continue fighting the Nazis. They had delivered enough oil and raw materials such as manganese and bauxite to keep American factories churning out ships, planes, tanks and other weapons. They had carried tens of thousands of American troops to England for future invasions.” 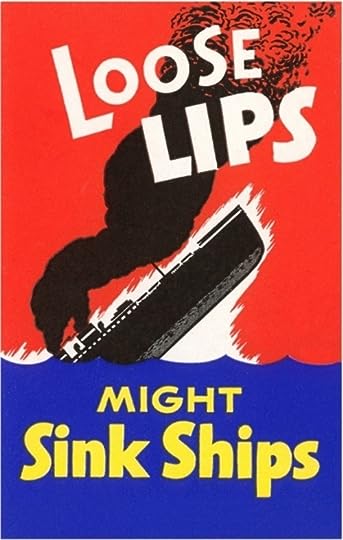 I was shocked to discover that, out of all the American men who went to war, the Merchant Marines had the most dangerous job.

”For seven months the U-boats had had their way in American waters, sinking more than three hundred merchant ships and killing thousands of merchant seamen. They had sent millions of tons of Allied food, supplies, munitions, and fuel into the sea playing havoc with the enemy’s supply line.”

So the plan during the first seven months of the United States officially entering the war was to send out hundreds of these ships with supplies and hope the majority of them managed to make it to their destination. These ships did not have any weapons to defend themselves or air cover or destroyers standing between them and the German wolfpack of U-Boats.

It is really baffling.

It didn’t make sense to the German Admiral Karl Donitz either. He was in charge of the wolfpack and had no qualms about sinking unprotected ships. He only knew that the more tonnage that America allowed him to sink, the better chance Germany had to prevail. 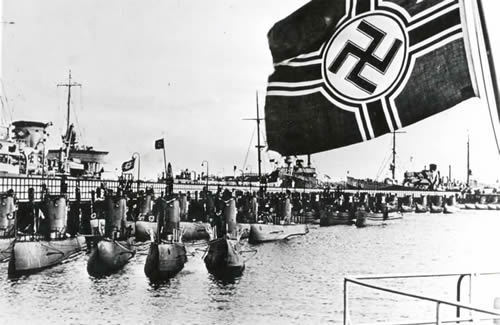 A German Wolf Pack of U-Boats.

Sometimes boats would sink slowly, sometimes they went down quickly. In many cases, the U-Boat captains did allow seamen time to escape the ship before applying the coup de grâce with a final devastating point blank torpedo shot. Escaping a floundering ship is difficult.”A sinking ship was a deathtrap that could kill a man in a thousand ways. Falling masts and guy wires snagged mariners and pulled them under. Jagged debris swirled through the water. The ship’s hot boilers could explode from contact with cold seawater.”

William Geroux shares with us numerous stories of sacrifice, of heroism, of terror, of maddening bad luck, of triumph, of death, and even an intriguing story about a baby born on a life raft. The men of Mathews County were at the heart of all these stories. 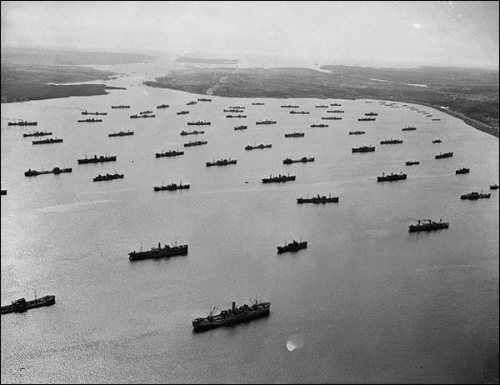 Allied convoy getting ready to cross the Atlantic.

Donitz was merely putting his wolfpack in the most likely places for allied shipping to be. I was amazed to learn how long the United States thought that loose lips were sinking ships instead of just realizing it was a matter of logistics. Even after the U.S. government decided to begin protecting their Merchant Marine ships, it still wasn’t easy. The run to Murmansk to resupply the Russians was a nightmare. Surviving the constant attacks from German fighters and U-Boats was only half the battle. Once their ships reached Murmansk, the level of danger only increased.

”It had an apocalyptic feel. Fires continuously burned throughout the city. German bombers attacked five to six times a day. Russian fighters rose to meet them, and engaged in dogfights with German fighters. Antiaircraft guns crackled from sandbagged bunkers in the rubble of buildings.”

By 1943, the predators of the deep, the wolfpack, had become the prey. Fatality rates of U-Boat seaman reached 70%.

The women who were left behind had to wonder about the fate of their men. In many cases, they never found out what happened to their father, husband, son, or brother until after the war when German records were available. Their ship was just overdue.

”Overdue, an ominous threat of loss and sorrow trembling yet in the balance of fate...There is something sinister to a seaman in the very grouping of the letters which form this word clear in its meaning, and seldom threatening in vain.”---Joseph Conrad

With not knowing the fate of their loved one, there is always room for hope. Maybe he is stranded on a deserted island or in a hospital unable to tell anyone who he is, or maybe he has been taken prisoner. The burden of not knowing weighs down people more than the burden of grief. It is like waiting in a cell after being condemned to die without knowing when you will be executed. Every time there is a clang of a cell door opening or the sound of hobnailed boots you wonder if this is finally it. For the women of Mathews County, it was the ringing of a phone or the receiving of a telegram, or in the case of the Hodges family, the appearance of Spencer, the son who had to tell his mother each time one of his brothers died. 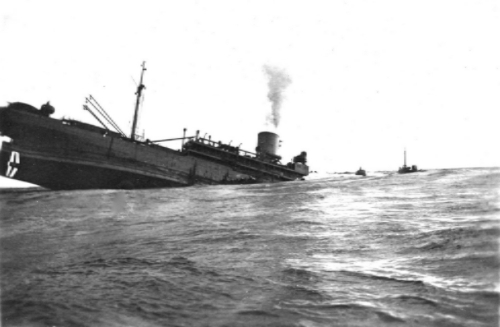 When I think about my understanding of the scope of World War II, I didn’t know I was missing a major piece of the history of how the allies won the war. I knew about the importance of supplies being in the right place at the right time, but it just never occurred to me to think about the seamen on those ships who took the risks and the part they played in saving the world from tyranny. Geroux brings these men out of the shadows of the conning towers. He discovers the bones of their corpses lying on the ocean floor and brings them back to life, however so briefly, to add their tales of courage to those of the Army, Airforce, Navy, and Marines.

Posted by JEFFREYKEETEN at 9:12 AM