THE HATCHING BY EZEKIEL BOONE

The Hatching by Ezekiel Boone
My rating: 4 of 5 stars

”She didn't know how many of them there were, but they were frantic. Dozens of them at least. They'd been packed in the egg, and they came out in a swarm, their bodies unfolding, alien and beautiful. Big and fast, black apricots thundering against the glass. Skittering.

She put her palm against the glass of the insectarium, and the spiders flew to it."

Professor Melanie Guyer has dreamed about being on the cover of Science or Nature Magazine. When she gets a Fed Ex package from an archaeological dig in Nazca, Peru of an ancient spider egg sac, she has a chance to eclipse anything that has ever been done before.

She can hatch the eggs and bring back a new/old species of spiders.

Cause it would be cool.

Except these spiders aren’t normal. They are aggressive. They eat flesh. They breed like fleas.

They are an apocalyptic tide of destruction. Good thing they are locked up in the lab.

Nazca spider drawn in the ground by an ancient civilization...maybe as a warning?

In Peru, billionaire Bill Henderson takes his private jet to stretch his legs and see the sights. He has a guide, Miguel, his bodyguard, and three ridiculously beautiful women, thirty years his junior, with him. Without all that money, none of these people would give him five minutes of their time, and he knows it. He steps off the trail to take a piss.

”And then the blackness started streaming toward him, covering the path and moving quickly, almost as fast as a man could run. Miguel knew he should be running, but there was something hypnotic in the quietness of the water. It didn’t roar like a river. If anything, it seemed to absorb sound. All he could hear was a whisper, a skittering, like a small patter of rain. The way the river moved was beautiful in its own way, pulsing and, at certain points, splitting and braiding into separate streams before rejoining itself a few paces later. As it got closer, Miguel took another step back, but by the time he realized it wasn’t actually a river, that it wasn’t water of any kind, it was too late.”

Henderson didn’t wait around. He made a run for the plane. The shrill screams of his entourage only inspired his fat legs to run faster.

He made the plane and headed back to Minnesota.

Now if you are thinking what a rat bastard, there probably wasn’t anything he could do to save the beautiful trio of muses or poor Miguel, but still... the billionaire... had to make it?

Don’t fret because... well... a spider is going to crawl out of his face. Well, actual do fret because his plane has become the Plague ship Mary.

Bill Henderson is bringing those spiders to YOU.

Meanwhile, a seismic station in India is hearing rumblings beneath the earth that don’t make sense. The Chinese have dropped a nuke on themselves. Of course, being Chinese, they don’t just say we have a HUGE SPIDER PROBLEM. They get all cryptic as if they are too embarrassed to ask for all our RAID MAX SPIDER BLASTER supplies.

So as we start to put all the various reports together, we begin to understand how totally screwed we are. Something has started all these spiders hatching, and it isn’t the brilliance of Professor Guyer because they are hatching everywhere.

I’ve read a few zombie apocalypse books. I’ve read a slew of post-apocalyptic books with everything from nuclear war to the moon exploding to flu destabilizing civilization and sending us back to a more primitive society, but I’ve never had the pleasure of reading about spiders who are capable of stripping the planet of every living thing.

WARNING: there are ramifications and behavior modifications possible after reading this book! 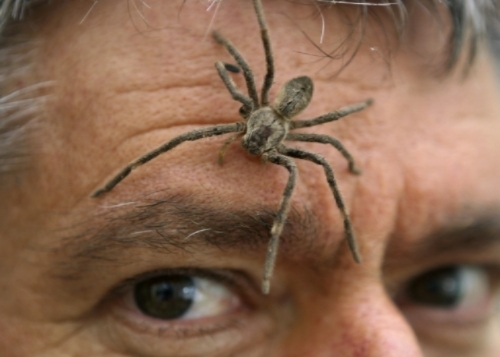 This was nearly me!

I was driving to Woodward, Oklahoma, the other day, listening to Metallica, when a spider the size of a half dollar leaped out of the vent in my dash and landed on the windshield right at eye level. My first thought was that I had to save all of humanity by lighting the molotov cocktail I always keep handy and driving off the road into a deep culvert, grasping a spider leg for what little comfort it could provide (I couldn’t decide if I was Thelma or Louise.), but after my heart rate reduced to normal levels, and I quit screaming like a republican at a presidential rally, I decided that I needed to pull over and commit arachnicide. Now I’m going to blame Ezekiel Boone for the death of that spider, just like I blame Alfred Hitchcock for my natural aversion for flocks of crows or blackbirds or ravens. Those beady eyed black bastards!

Boone will convince you to quit worrying about zombies or meteorites or nuclear explosions and start paying better attention to something a little more likely...spiders, a black tide of spiders.

Posted by JEFFREYKEETEN at 9:13 AM