Carlin In His Own Words

Last Words by George Carlin
Reviewed by Jason Koivu
My rating: 5 of 5 stars

Last Words...an apt title for an autobiography penned at the time of the author's death.

I wasn't sure I wanted to read a retrospective of a dead comedian's life. I've done it before and it can be depressing. Plus, I love George Carlin in a way. I mean, I was a fan back in the 80s/early 90s, but I haven't followed his career since. What interest would I have in the life of a man I hardly know? I thought about it, realized I was talking about one of the great comedians of our time, spanning generations, and decided I really ought to know more about the man. Who better to hear about him, but from himself?

As always when reading books by comedians, I suggest going with audiobooks, especially when they're read by the author/comedian themselves. Books by Tina Fey, David Sedaris, and Amy Poehler are all recent reads of mine that attest to the value of that wisdom. There's nothing like hear the intonation, the inflection, the rhythm of the words as they were intended. In the case of Last Words that was going to be a problem, as Carlin died before he finished it. Luckily George has a brother, Patrick, who narrated this book with his magically "Carlin" voice so very similar to George's that after a couple hours of listening I forgot it wasn't George speaking. 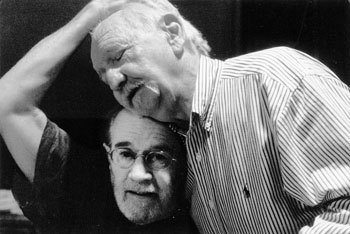 Ghost-written with friend Tony Hendra, who said in an included interview with Carlin's daughter that the experience was more like writing with a ghost, Last Words lays out Carlin's entire life in a very satisfying, linear timeline, touching on all the important personal events, as well as the history moments, that molded him.

His Irish-Catholic upbringing, childhood joys, and growing up with an alcoholic, abusive and estranged father kick it all off at the perfect pace and just the right amount of "sharing"...after all, don't we read these books with some amount of snoopy curiosity? Of course we do.

Carlin was never what you'd call "straight laced", but he did spend time in the military and started out with somewhat of a right-wing, conservative mind. He takes us through the relationships and times that changed this young, self-admittedly ignorant person into the radical comic of the '70s.

As the times changed, so too did the thinking of what already would've been considered a very successful comedian. He could've rested on his laurels, but he pushed on, reinventing himself, while somehow doing that most uncommon of things, becoming more true to himself and his ideals. It's an incredible transformation and one quite worth reading about.

All of Last Words is quite worth reading. I highly recommend you let Patrick take you through the raucous life of his beloved brother George.


View all my reviews
Posted by Jason Koivu at 6:00 AM