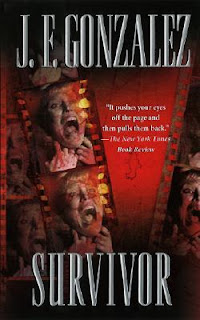 J.F. Gonzalez
Dorchester Publishing
Reviewed by Nancy
2 out of 5 stars

It was supposed to have been a romantic weekend getaway. Lisa was looking forward to spending time alone with her husband, and telling him that they were going to have a baby.

Instead, it became a nightmare when her husband was arrested and Lisa was kidnapped. But the kidnappers aren't asking for ransom. They want Lisa herself. They're going to make her a star . . . in a snuff film.


Survivor is sick, twisted, and very, very disturbing. I briefly considered abandoning it in frustration after Lisa did what she had to do to get out of her situation. Then I realized I had to finish to see if Tim, Animal and the other depraved monsters got their due. I'm relieved it is finally done and the book safely out of my house.

I honestly don't know what possessed me to buy this. I like well written horror stories and don't mind some violence and gore, but Survivor wasn't particularly well written and the excessive violence and brutality made me feel dirty for reading it.

Two stars because I got sucked in and managed to finish it.
Posted by Nancy at 8:45 PM