Bat Masterson: The Man and the Legend by Robert K. Dearment
My rating: 4 of 5 stars

”Josephine Earp recalled Bat’s dropping in on them at their home in San Diego about 1885. He was on his way to Ensenada, Mexico, to pick up an army deserter who was reputed to be a tough hombre. Bat asked Wyatt to accompany him. ‘That made sense to Wyatt,’ wrote Josephine. ‘This careful approach, so characteristic of both these men, may account for their survival to a ripe old age despite years in a dangerous business that claimed the lives of many. Neither of them took unnecessary chances.’” 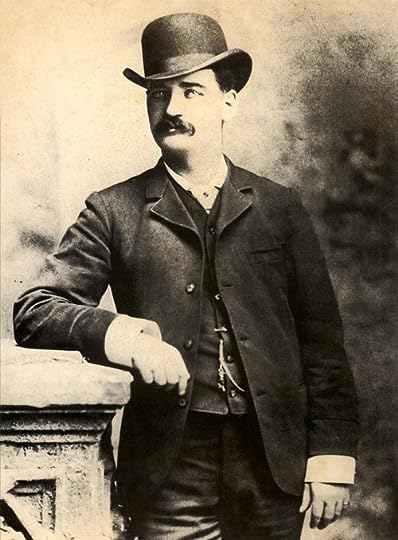 Bartholomew Masterson was the name he was born with. His family called him Bart, which eventually evolved into Bat. There are several stories about how he came to be called Bat, but the most pedestrian story is the one that is true. The Penny Dreadfuls liked the idea that he got that nickname by batting desperadoes over the head with his cane. He didn’t like his given name, Bartholomew, and renamed himself William Barclay. This name ended up on his tombstone, but of course, everyone called him Bat.

The West is filled with stories of brothers standing by brothers, but I don’t think there are any more compelling stories about siblings than those about the Earps and the Mastersons. Growing up in Kansas, I enjoyed hearing lurid stories about these famous brothers. I was an avid reader of True West Magazine. The articles regarding the Earps or the Mastersons were the ones I kept to read again and again. I inhaled books about them. I filled my head with all kinds of facts and fictions about them. The truth is not easy to sort out because Tall Tales were as much a part of the West as were whiskey, doxies, and six shooters.

What Robert K. DeArment set out to do was write the definitive biography of Bat Masterson. Of course, to do so is the same as telling the history of the West. He recently wrote a second biography of Bat called Gunfighter in Gotham which I’m so glad he did because the time that Bat spends in New York is certainly worthy of special attention.

Bat was born in Quebec, but his family homesteaded in New York, Illinois, and finally in Wichita, Kansas. It is interesting to think about who Bat Masterson would have been if his father hadn’t moved to the state that gave Bat such a great opportunity to become a legend. Would he have still come West? I’m sure he would have. The West was too alluring for young men in this time period, especially infinitely curious men like the Masterson brothers. Would he have landed in Dodge City? Who can say?

Bat started out as a Buffalo hunter. He did his part, practically government sponsored, to eradicate the main source of food of the American Indian from the face of North America. He also graded the way for railroad tracks and was not paid for that work. This is the first opportunity where we see what kind of man he was before he was even really a man. A friend described him thus: ”He was a chunk of steel and anything that struck him in those days always drew fire.” To illustrate, Raymond Ritter was rumored to be arriving on the train in Dodge City with a roll of cash. He still owed Bat $300. Bat went to meet the train and drew a crowd as he went. He held a pistol on Ritter and demanded his pay. He got his money and came off the train to the cheers of the crowd. He bought a round of drinks for everyone.

Now what is most interesting about this incident is Bat Masterson was 19 years old.

Bat Masterson acquired the reputation for being a killer, but the reality was far removed from what people had been led to believe. One of his friends, who had been drinking, had some fun with a newspaper reporter from back East and spun him a story about the then 27 year old Masterson having killed 26 men. This story stuck, and over the years Masterson did little to dispel that lie, nor did he ever confirm it. It did make men careful around him. 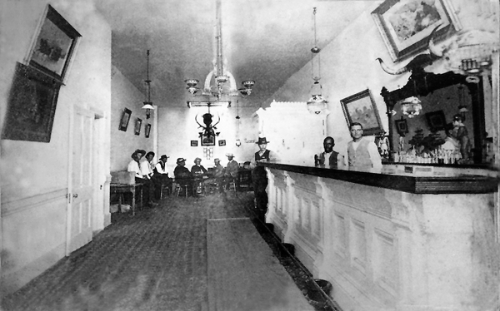 In actuality, he thought he’d killed three men, but on one of those he was misinformed. The one man we know for sure was killed by Bat was Sergeant Melvin K. King.

It was over a girl.

Mollie Brennan was coveted by King, but at least on the night of January 24th, 1876, she preferred the company of the rather dashing and handsome Bat Masterson. It happened in Sweetwater, Texas, after hours in the dancehall, The Lady Gay. Bat knew the owner and had acquired a key so he could spend some time alone with Miss Brennan.

”When King pounded at the door, Bat, thinking that some friend who knew he was there wanted a nightcap, unlocked the door and stepped back. King sprang inside, cursing and brandishing his six-shooter. Mollie, shrieking at King, jumped in front of Bat, but the sergeant, insane with rage, jealousy, and bad liquor, opened fire. A bullet tore through Mollie’s abdomen, struck Bat, and lodged in his pelvis. The girl sank to the floor with a groan and Bat staggered backward. His legs turning to jelly under him, half-blinded with shock and pain, he managed to draw his gun and fire once. His bullet hit King squarely in the heart, killing him instantly.” 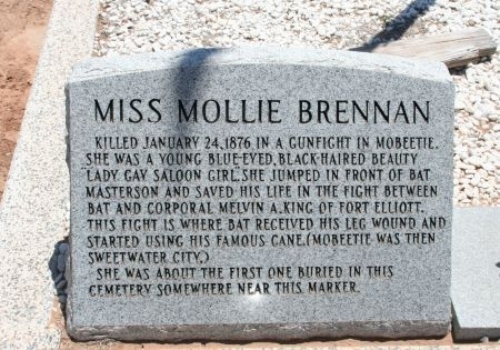 When his older brother, Edward, was shot down in the streets of Dodge City in 1878 by Jack Wagner and his trail boss Alf Walker, Bat opened fire from across the street and believed that one of his bullets killed Wagner. He even testified to the fact in the hearing, but my feeling is that it was Ed’s bullet that killed Wagner.

The other man that Bat thought he killed was James Kenedy. A posse had been formed to chase Kenedy after he killed the actress Dora Hand, who happened to be in the bed of the man he had intended to kill. Once they caught up with Kenedy, Bat shot him in the shoulder. He was later informed that Kenedy died from the wound, but Kenedy it turns out died from other causes. Mainly from being an idiot.

Masterson might have killed, but he certainly wasn’t a killer. . Considering how much time he spent wearing a badge in more than one state and in numerous cities, I would say that he was judicious in his need to terminate men from breathing. 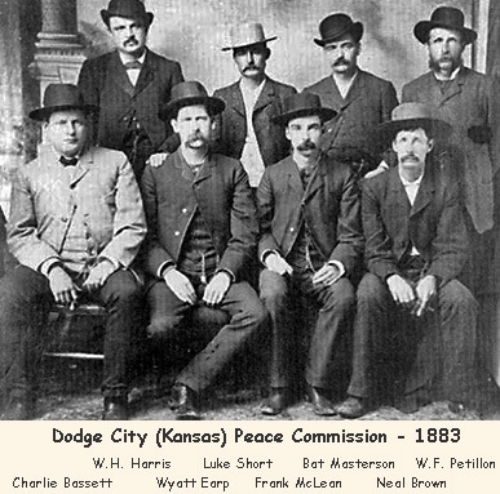 Dubbed the Dodge City Peace Commission when they arrived to help Luke Short sort out his difficulties with the powers-that-were in Dodge at the time. These were, without a doubt, the toughest hombres ever assembled.

He loved to gamble and seemed to be pretty good at it. He loved to dress well, and the ladies seemed to like him. He was loyal to his friends. He bailed out Doc Holliday from a very serious extradition order back to Arizona by trumping up some charges to keep him in Colorado because Wyatt asked Bat to help. Bat didn’t even like the acerbic Holliday. He came running whenever his younger brother Jim was in trouble. He dropped everything to come back to Dodge City to help his friend Luke Short with some difficulties. He brought some friends by the name of Wyatt Earp, Charlie Bassett, and several other famous gunfighters, as well. Thank goodness they took a photograph while all of them were together. Needless to say, the difficulties his friends encountered were quickly settled once Bat showed up. 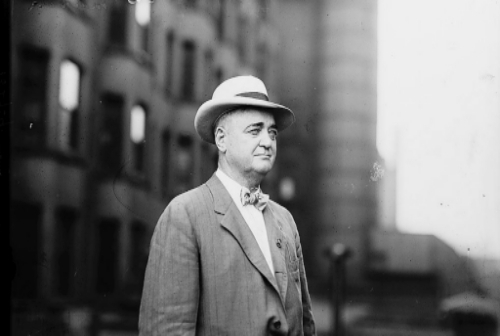 Still dapper as the Gotham Gunfighter.

As he got older, he exchanged his six-shooters for the power of the pen. He started a political newspaper in Dodge City called Vox Populi to write articles to destroy his political opposition. He only needed to release one scorching issue, and all of his party swept to victory at the polls. This made a lasting impression on Bat, and when he moved to New York, he became a full time newspaper reporter. He loved prize fighting and attended every major fight held in North America while he was alive. He wrote about the sport, and when he spotted something fishy, he called the fighters on the carpet.

He died at his desk at work, writing what turned out to be his last column. ”Things had broken pretty well for him in ‘this old dump of a world of ours,’ and he had departed the same way so many of his friends had died; fast, with his boots on, and with his chosen weapon in his hand.” 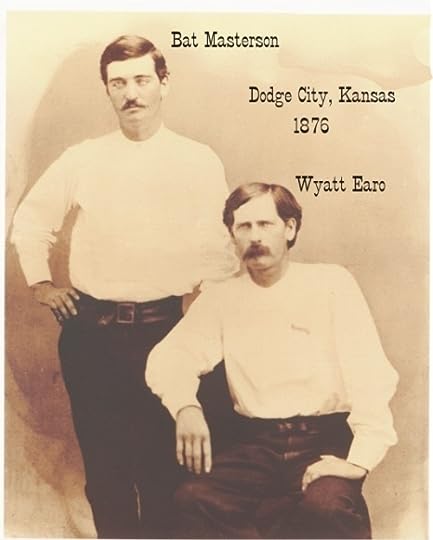 Certainly, there is no one more famous in the West than Wyatt Earp. He was a good self-promoter, and newspapers were always hungry for his stories. Doc Holliday, probably riding on the coattails of his friend Wyatt and helped by some wonderful depictions of his character by the actors Val Kilmer and Dennis Quaid, is probably the second most famous personage from the history of the West. Debates would range after that, but for me there is no doubt that Bat Masterson should be at the top of the rest of the list. There was a lot to admire about him. His loyalty, not only to his brothers, but to his friends as well. His honesty. His toughness and grit. His willingness to be more than just a famous gunfighter and embrace the change of a new century. There are statues in Dodge City to Wyatt Earp and Doc Holliday, but I’ve heard rumors that Bat Masterson will be the next statue erected to commemorate those days when there wasn’t a rougher, tougher town in the world than Dodge City.

I want to thank Robert K. DeArment for sifting facts from the Tall Tales. It was a difficult task given that Bat and Wyatt, in some cases, did very little to confirm or deny certain stories. I’m sure they both had many chuckles over the whoppers that circulated about them. The great thing is the truth about their lives is just as compelling. I’ve only touched on a few of the points about Masterson that I found most interesting. This book is filled with a multitude of tense scenes, involving gunplay, women, drinking, boxing, and politics. When you reach the end, you will realize that, even though Bat put himself in many dangerous situation, they were always based on careful calculations. He always shaved the odds in his favor, whether it was in a gunfight or at the card table.

Posted by JEFFREYKEETEN at 1:54 PM