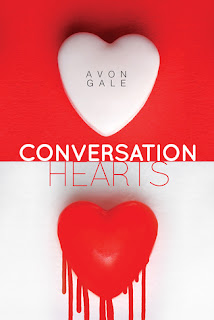 It’s Valentine’s Day, and grad student—and male escort—Levi Barron expects to spend his evening with a client who’s paying him for his services in bed… not an assassin who needs to borrow the view from his hotel room in the morning.

With nothing to do but endure the company of his unwanted guest, Levi and the assassin, Sinjin, spend some time bonding over HGTV, minibar beverages, Flannery O’Connor short stories, terrible Valentine’s candy, and the necessity of lying about their jobs.

Their evening takes an unexpected turn when they decide to indulge in their mutual attraction, and in the morning Levi doesn’t know if he’s spent the night with a hired killer or a hydraulic engineer with a very specific fantasy. Either way, the two have enough chemistry—in and out of bed—that Levi isn’t sure one night with Sinjin will be enough.

And a message left in candy suggests the feeling is mutual.

I’m old and haven’t done a good job keeping up with pop culture, so had to look up the following:

That said, my lack of knowledge didn’t at all detract from my enjoyment of this story.

Levi Barron is poor graduate student working for an escort service. While waiting for a client who doesn’t show, Sinjin arrives. Sinjin is as surprised as Levi, because according to the hotel database he hacked into, the room was supposed to be empty. Having Levi around seriously puts a crimp in his assassination plans. Sinjin wasn’t planning to kill Levi, but he can’t very well let him leave, can he?

This is a fun, fast-paced and clever story that is hilarious and also ridiculously hot.

I loved the banter between the guys, the tension, the red boxer briefs with little hearts, and the chalky heart candies with words on them.

I’m thinking I might like to borrow Levi’s Surface texture paste. It may be less goopy than what I’m currently using.
Posted by Nancy at 2:48 PM