Julian by Gore Vidal
My rating: 5 of 5 stars

”We are toys, and a divine child takes us up and puts us down, and breaks us when he chooses.” 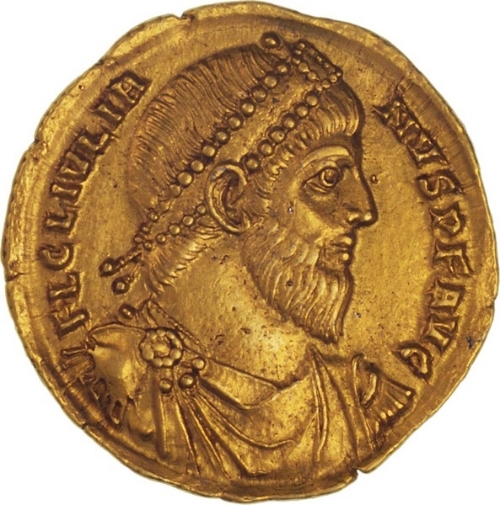 Julian was a child raised in the midst of turmoil. After the death of Constantine the Great in 337AD, there was a huge power vacuum in the Roman Empire, and Julian’s cousin Constantius II methodically eliminated all those who could potentially threaten his reign or those of his brothers. One of those executed was Julian’s father.

Julian and his brother Gallus were spared.

Their youth may have spared them, but in Julian’s later writings, he wrote that he believed that only at the urging of Empress Eusebia, by the thinnest of margins, were they saved. The very thing that nearly ended their lives, that dangle between their legs, also made them valuable to the family. Constantius II and his brothers were having difficulties spawning male children to assume the throne. If the Empire was to remain in family hands, then Gallus and Julian would be the only means with which to do so.

The boys are sequestered away under the tutelage of Bishop Eusebius in Nicomedia. It is never a bad thing to be out of sight and out of mind; after all, Constantius had already proven that he was not squeamish about getting family blood on his hands. As has been proven time and again, absolute power corrupts absolutely. ”First the tyrant plays harmless games: ...plays practical jokes; and no matter what he says and does, everyone laughs and flatters him, finds witty his most inane remarks. Then the small jokes begin to pall. One day he finds it amusing to rape another man’s wife, as the husband watches, or the husband as the wife looks on, or to torture them both, or to kill them. When the killing begins, the emperor is no longer a man but a beast, and we have had too many beasts already on the throne of the world.”

The boys live in constant, real fear that one day someone will arrive with a summons for them to see the Emperor. This directive can indicate two very different intentions. They could be receiving a promotion, or the more probable one is they are being set up to be executed. Any wild rumor can be the end of them. It would certainly give anyone a different perspective on life living under the constant threat of death. The older they become the more dangerous they become to Constantius. 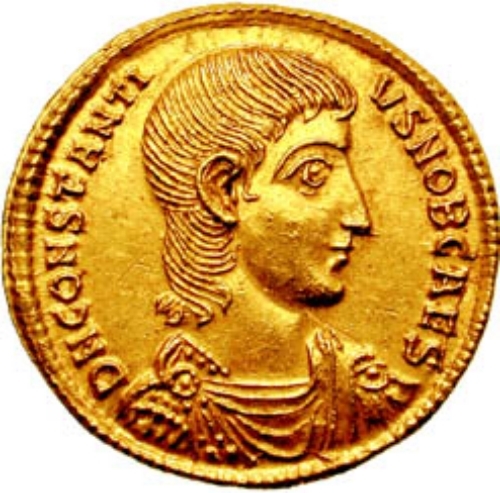 Gallus is sent for and made Caesar of the East in 351, which was a position representing a trial run to show his loyalty to Constantius and prove his ability to be the heir to the empire. Unfortunately, Julian’s brother proved unreliable. Gallus had shown signs of instability as a boy; power did not quell these tendencies, but merely enhanced their vulnerabilities. His head was separated from his body in 354.

And then there was one.

In 355, Julian is named Caesar. Being named Caesar is equivalent to being chased by angry, snarling German’s with ”Their dyed hair worn long, and hangs about the face like a lion’s mane,” down a long, dark alleyway where every door is locked, and all you can do is keep running to the end. Eventually, the worst you can imagine is probably going to happen.

Every shadow that falls across your doorway is a potential assassin. Herculean sphincter and bladder control would be imperative for anyone wanting to wear the purple.

Julian would have rather been a philosopher or even a philosopher priest if he must. Before being conscripted into the family business, he spent a short glorious time in Athens learning from the very best philosophers. Books were his solace for the rest of his life. ”As long as I could read, I was never entirely wretched.” 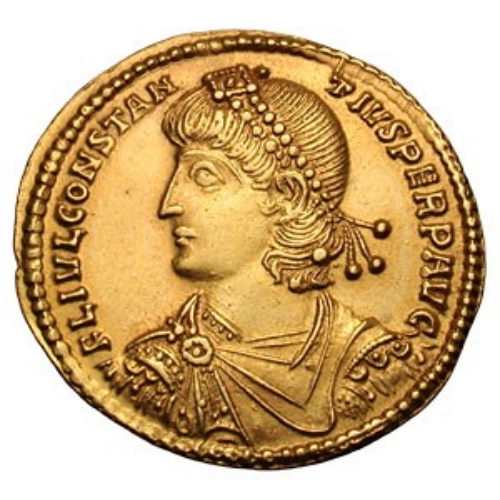 One of the conditions that Constantius made for Julian to be named Caesar was that Julian had to marry his sister, Helena. When someone is setting you up on a date and they keep talking about your potential date’s sparkling personality, you know they are not one of the blessedly lovely people. Helena *shudder* hopefully had at least a great personality, because unfortunately *shudder* she looked TOO much like her father. ”Helena was a good woman but our moments of intimacy were rare, unsatisfactory, and somewhat pathetic, for I did want to please her. But it was never pleasant, making love to a bust of Constantine.”

Julian is remembered as the Apostate. He was such an advocate of Greek philosophy that he wanted to return the Empire to the Neoplatonic paganism. Constantine the Great, Julian’s uncle, was the first Roman Emperor to proclaim himself a Christian, but also the first to sign a decree that allowed tolerance for Christianity.

It is really remarkable how fast Christianity took over such a large part of the world. “No other religion ever considered it necessary to destroy others because they did not share their same beliefs.” I guess, if you are intent on eliminating the competition, growth happens exponentially. With convert or die being the only options, most people will waver in their firmest beliefs. Who is to say, after all, who you worship in the cathedral in your head?

Julian’s rise to power came relatively quickly after this mass conversion to Christianity, or Galileanism as Julian liked to refer to them because he didn’t feel they were very “Christian” in the way they conducted themselves. The point being, there were still a lot of people who might be professed Christians, but were actually Pagans in their hearts, so when Julian adopted Hellenism and brought back the old Gods along with the sacrificing of animals, there were numerous people who were happy that he brought back the old ways.

The Galileans were furious and began plotting his assassination. They are not alone; Julian’s enemies are as innumerable as a field of wheat.

I’ve read that part of the attraction of Christianity is the single God concept. Trying to keep a whole multitude of Gods straight and who is responsible for what was confusing and difficult. To worship one God under the Pagan system was to offend another, and sacrificing animals was frankly expensive for most people. It was a huge deal for Constantine to convert, and it was also a huge deal for Julian to bring back Hellenism. It sort of reminds me of the whiplash between Catholicism and Protestantism that happened in England in the 16th century.

Religion, unfortunately, has proven a very effective way to divide us.

Julian did not try to get rid of Christianity. He just wanted religious tolerance so that everyone could worship the way they wanted. He did remove a lot of Galileans from positions of power, which created a lot of adversity for him, but it was necessary because he needed people loyal to him. This would not be an abnormal thing, but when people feel they are being persecuted for religious reasons rather than political reasons, even though in this case the two were wrapped together, they take it much, much more personal. 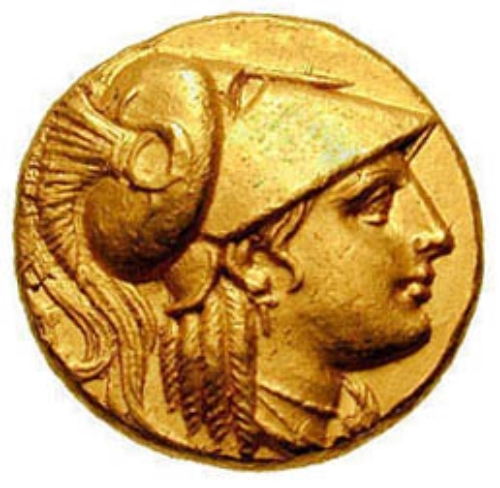 Coin of Alexander the Great.

Julian was a surprisingly good military commander and soon conquered Gaul and put down several uprisings. Julian saw himself as a student of Alexander the Great and wished to experience the same level of success in war as his hero. He was in the midst of conquering Persia when he died. He was a commander who threw himself in the fray, which is honorable, but ultimately detrimental to the cause if he is taken or killed. Controversy swirls around his death, and Gore Vidal has some very distinct opinions of what he felt happened.

Vidal starts this book with a series of letters between two philosophers, Priscus and Libanius, who both knew Julian well. They are attempting to edit and prepare Julian’s journals for publication, which of course is still a hot potato in 380AD. I actually found myself chuckling several times as these philosophers betrayed their own sense of pride, petty jealousies, and false memories. Most of the story is told from “the discovered journals” of Julian. This blending of the journals with the uncertain memories of the philosophers is a remarkable achievement of historical fiction writing. Like his book Lincoln, Vidal brings the central characters to life in Julian and makes the reader feel the fear and uncertainty of Julian’s childhood. He places the reader on a camp stool in that tent in Persia as Julian gives his final commands. From beginning to end you are there.

I do wonder if Julian had lived longer if religious tolerance would have taken root and been more of a standard right of all people? Why do we care so much how someone worships or for that matter whom someone sleeps with and how can some of us believe that a man’s skin color can have anything to do with his character? It seems we always work so hard to discover how we are different instead of putting that same work into discovering what we have in common. Julian had the right ideas, but he would have had to set aside his lust for conquest and exchanged it for the much more difficult task of maintaining peace.

Posted by JEFFREYKEETEN at 3:31 PM