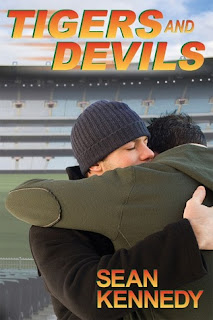 
The most important things in Simon Murray’s life are football, friends, and film—in that order. His friends despair of him ever meeting someone, but despite his loneliness, Simon is cautious about looking for more. Then his best friends drag him to a party, where he barges into a football conversation and ends up defending the honour of star forward Declan Tyler—unaware that the athlete is present. In that first awkward meeting, neither man has any idea they will change each other's lives forever.

Like his entire family, Simon revels in living in Melbourne, the home of Australian Rules football and mecca for serious fans. There, players are treated like gods—until they do something to fall out of public favour. This year, the public is taking Declan to task for suffering injuries outside his control, so Simon's support is a bright spot.

But as Simon and Declan fumble toward a relationship, keeping Declan's homosexuality a secret from well-meaning friends and an increasingly suspicious media becomes difficult. Nothing can stay hidden forever. Soon Declan will have to choose between the career he loves and the man he wants, and Simon has never been known to make things easy—for himself or for others.

Declan Tyler is a famous, but closeted, football player. Simon Murray is a film festival director. These two very different men meet at a party that Simon is forced to attend by his best friend, Roger, and his wife, Fran. Declan and Simon hit it off instantly, but they are in for many difficult times ahead.

Because of Declan’s fame, both men have to deal with lots of media attention, which eventually casts a spotlight on Declan’s sexuality and creates problems for Declan and Simon, both within their relationship, and among their friends, families and colleagues. As if this is not difficult enough, Declan and Simon are typical of many men who have a problem with communication. Misunderstandings and hurt feelings are rife, but Declan and Simon really love each other and are determined to make their relationship work. They are very fortunate to have loyal, understanding and supportive friends who stand by them.

Tigers and Devils is a sweet, angst-filled, emotional, humorous and heartwarming romance. While the guys do have sex, it is subtle and non-explicit. The emphasis here is on the relationship. The main and secondary characters are well-developed, interesting, and complex. It is refreshing to read a gay romance with likable female characters. Football is a significant part of the story and helps move it along, but if you’re not a fan, don’t worry. There is just enough detail to give the reader a picture of the sport without bogging down the plot.

Oh, did I mention the story takes place in Australia? And thankfully there are no Americanisms! Sure, I had to look up a few terms, but that certainly didn’t hamper my enjoyment of the story. I loved the glimpse into Australian life and culture.

I loved spending time with Simon and Declan and enjoyed the full-length of this story. My only complaint is that it ended.
Posted by Nancy at 1:01 PM