BONNIE AND CLYDE GOING DOWN TOGETHER

Go Down Together: The True, Untold Story of Bonnie and Clyde by Jeff Guinn
My rating: 5 of 5 stars

”We're going down, down in an earlier round
And Sugar, we're going down swinging
I'll be your number one with a bullet
A loaded god complex, cock it and pull it

---Sugar, We are Going Down by Fall Out Boy 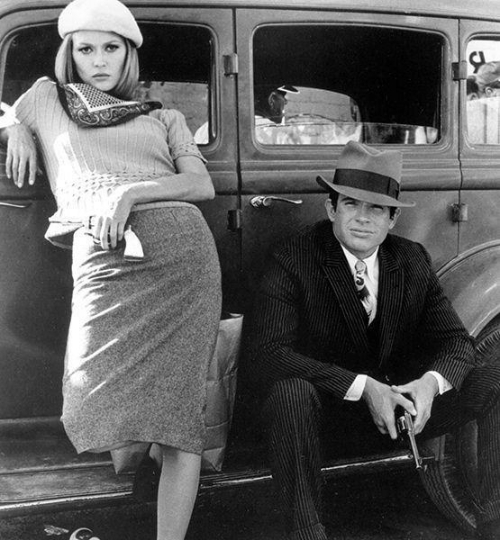 The first time I met Bonnie and Clyde, they looked like this. Faye Dunaway and Warren Beatty 1967.

John Dillinger has always been my favorite Depression Era gangster. He was cool, suave, charming, and organized. He was made for Hollywood. Pretty Boy Floyd, Baby Face Nelson, and Machine Gun Kelly had the best nicknames, evoking danger and romance just by letting their names trip across your tongue. Alvin “Creepy” Karpis was the only one of the Big Four named as Public Enemy #1 (Sorry Machine Gun Kelly, you didn’t make the cut) to be captured alive. I’ve always sort of been dismissive of Bonnie and Clyde because I’ve always perceived them as just a couple of bungling, murderous kids who never really became organized enough to be true gangsters.

They were not criminal masterminds, not even close to the same class as say a John Dillinger, who planned and did careful reconnaissance before committing to any bank job. Dillinger was always after the big score. Get enough in one job to not have to work for a while and at the same time minimize risk. Bonnie and Clyde were much more likely to knock off a gas station or break into a hardware store for just enough money to keep them in gas and food. Just a couple of inept kids, right?

That case can be made, but these inept kids killed somewhere in the neighborhood of nine police officers and numerous civilians. They squeezed out of more tight spots than Houdini and led law enforcement on a merry chase from Texas up to Minnesota and back. Two years of sleeping in stolen cars and constantly moving like a pair of murderous gypsies kept them just out of reach of the law. They had no illusions about how all this was going to end, but until then they were going to sell a lot of newspapers. 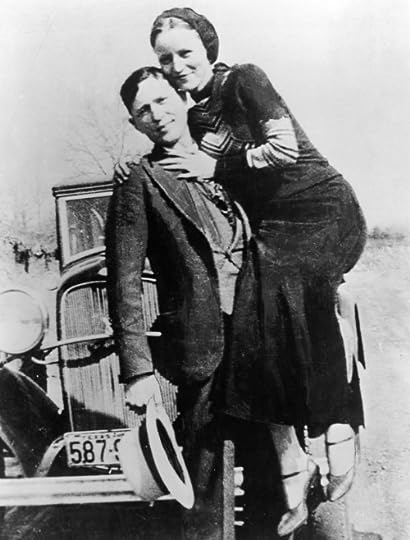 Bonnie Parker and Clyde Barrow. The real ones.

”Thanks to the media. Clyde and Bonnie had quickly come to be considered the epitome of scandalous glamour. But in person Clyde was short and scrawny, and Bonnie’s looks were ordinary. They were both crippled, Clyde from cutting off two of his own toes in prison and Bonnie as the result of a car wreck nine months earlier in which her right leg was burned so badly that bone was visible in several places. She hopped now rather than walked. Clyde often had to carry her. They had little in common with the glittering images of themselves that mesmerized the public.”

Soaking wet, Clyde might have weighed 127 pounds, which made him an easy target for bullying while he did a stint in prison. A fellow prisoner by the name of Crowder made his life a living hell. He was much larger than Clyde and had no problem overpowering him and raping him repeatedly. Prisoners were also expected to work long hours on the prison farm in debilitating heat. It was not unusual for men to choose to disfigure themselves rather than work the grueling hours for the prison farm. Clyde was no exception and cut off two toes, including his left big toe. He had no idea that his mother had arranged clemency for him, and he was released within a few weeks. This kind of bad luck, bad timing, followed Clyde around for the rest of his short life. 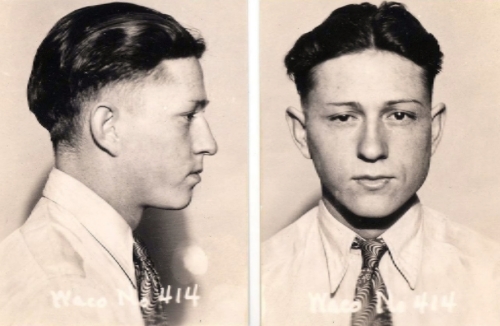 They put Clyde Barrow in prison as a petty crook and sent him out as a gangster.

It is no surprise that Clyde swore he’d never go to prison again, which changed the game. With the option of surrender eliminated from consideration, Clyde became a very dangerous man to try to apprehend.

Clyde and Bonnie both grew up on the wrong side of the tracks in West Dallas. The one thing they knew was they would do anything to not be poor. When Clyde got out of jail, he tried to go straight, but the local sheriff and his deputies made it impossible for him to keep a job. Any time there was a car stolen or a burglary, they would come haul Clyde out of work to question him. It didn’t need to happen twice before an employer was telling him to hit the bricks.

The public should have been afraid, not enamored, with Bonnie and Clyde, but the Depression Era was a time when people were becoming very aware of the difference between the haves and the have nots, and Bonnie and Clyde represented a thrilling, romantic rebellion. For people trapped in their honest but meager lives, they could live vicariously through them by just buying a newspaper or, for those who wanted even more sensationalized stories, by picking up a copy of True Detective.

When some undeveloped pictures were confiscated in a raid on a Barrow gang temporary abode in Joplin, the press and public went wild. Most were just pictures of them goofing around, but those pictures did as much to shape their legacy as the true stories about their exploits. ”The Joplin photos introduced new criminal superstars with the most titillating trademark of all--illicit sex. Clyde Barrow and Bonnie Parker were young and unmarried. They undoubtedly slept together--after all, the girl smoked cigars. Whether they’d even heard of the term or not, the Freudian implications did not escape journalists or their readers.”

They were demonized and deified in equal measure. 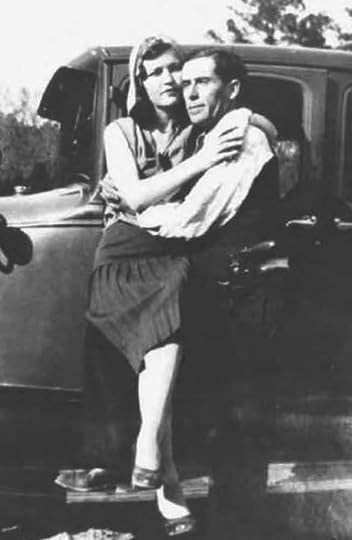 Buck and Blanche Barrow. Blanche was sultry and naturally more glamorous than Bonnie, which caused some friction.

Clyde’s older brother, Buck, and his lovely wife, Blanche, were part of the gang off and on. Other members came and went, too. A Raymond Hamilton had the best influence on Clyde. He brought planning and organization to the gang and allowed them to knock off more lucrative targets. Unfortunately, Clyde and Raymond were in a constant power struggle for control that insured they could not get along for extended periods of time. Clyde had the same problem with his older brother, Buck. It was going to be his show or no show at all. 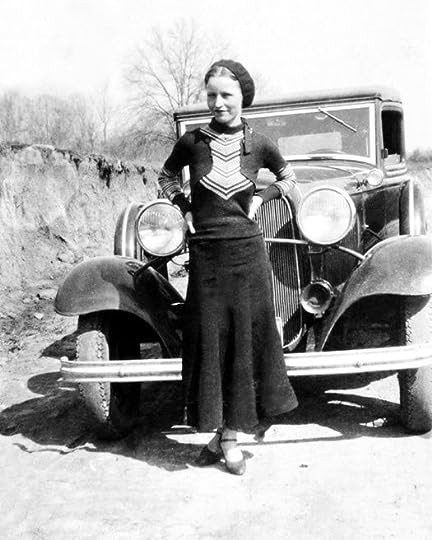 Bonnie was a poet. You won’t be confusing her with T. S. Eliot or Walt Whitman or Emily Dickinson, but there is a poignancy in the fact that she felt the need to express herself, to make sense of her life with words.

The End of the Line

You've read the story of Jesse James
Of how he lived and died;
If you're still in need
Of something to read,
Here's the story of Bonnie and Clyde.
Now Bonnie and Clyde are the Barrow gang,
I'm sure you all have read
How they rob and steal
And those who squeal
Are usually found dying or dead.
There's lots of untruths to these write-ups;
They're not so ruthless as that;
Their nature is raw;
They hate all the law
The stool pigeons, spotters, and rats.
They call them cold-blooded killers;
They say they are heartless and mean;
But I say this with pride,
That I once knew Clyde
When he was honest and upright and clean.
But the laws fooled around,
Kept taking him down
And locking him up in a cell,
Till he said to me,
"I'll never be free,
So I'll meet a few of them in hell."
The road was so dimly lighted;
There were no highway signs to guide;
But they made up their minds
If all roads were blind,
They wouldn't give up till they died.
The road gets dimmer and dimmer;
Sometimes you can hardly see;
But it's fight, man to man,
And do all you can,
For they know they can never be free.
From heart-break some people have suffered;
From weariness some people have died;
But take it all in all,
Our troubles are small
Till we get like Bonnie and Clyde.
If a policeman is killed in Dallas,
And they have no clue or guide;
If they can't find a fiend,
They just wipe their slate clean
And hand it on Bonnie and Clyde.
There's two crimes committed in America
Not accredited to the Barrow mob;
They had no hand
In the kidnap demand,
Nor the Kansas City depot job.
A newsboy once said to his buddy;
"I wish old Clyde would get jumped;
In these awful hard times
We'd make a few dimes
If five or six cops would get bumped."
The police haven't got the report yet,
But Clyde called me up today;
He said, "Don't start any fights
We aren't working nights
We're joining the NRA."
From Irving to West Dallas viaduct
Is known as the Great Divide,
Where the women are kin,
And the men are men,
And they won't "stool" on Bonnie and Clyde.
If they try to act like citizens
And rent them a nice little flat,
About the third night
They're invited to fight
By a sub-gun's rat-tat-tat.
They don't think they're too tough or desperate,
They know that the law always wins;
They've been shot at before,
But they do not ignore
That death is the wages of sin.
Some day they'll go down together;
And they'll bury them side by side;
To few it'll be grief
To the law a relief
But it's death for Bonnie and Clyde. 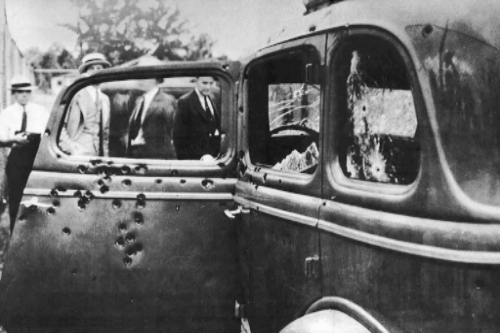 We all know how it ends. Guinn writes that final scene in Bienville Parish, Louisiana, the best I’ve ever seen it described. It is gruesome and heartless, born out of a real fear of these outlaws who had proven themselves to be as dangerous and unpredictable as trapped animals. 130 rounds were poured into that 1934 Cordoba Gray, 8 cylinder, deluxe sedan Ford with the greyhound radiator cap, which had been stolen in Topeka, Kansas, and forever now known as THE DEATH CAR. When the legendary Texas Ranger Frank Hamer walks up to the car and puts one final blast into Bonnie, a few expletives escaped my lips. I felt a flare of anger that attests to the difference between knowing people and just knowing they existed. Last night, I heard Bonnie’s screams in one of my nightmares, and the men who were there that day heard them for the rest of their lives.

If you want to really meet THE Bonnie Parker and THE Clyde Barrow, then the only way you are going to do it properly is to read this book.

Posted by JEFFREYKEETEN at 9:52 AM