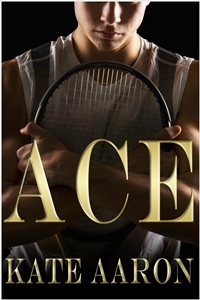 At twenty-two years old, World No.6 and England's No.1, Brian Scagill has the tennis world at his feet. Last year's semifinalist, this year Brian enters England's biggest tournament determined to win. A Grand Slam on home turf is calling to him and he's not going to let anything stand in the way of victory - certainly not a cute Croatian who doesn't even play in the same league.

Fooling around with Lexi might be an easy distraction but the last thing Brian needs right now is to be distracted, and there's more than this tournament at stake.

I like tennis. It’s a graceful, elegant and stylish sport that requires technical, mental and physical skills and an amazing amount of stamina. While I enjoy watching it on TV now and then, it’s also the kind of sport that I can easily switch off and return to at any time without feeling that I’ve missed anything. I’m old enough to remember the meltdowns of Andre Agassi, John McEnroe, and Jimmy Connors and more recently, Serena Williams and David Nalbandian. While their antics were sometimes amusing, they would be far more acceptable in high-action, contact sports like football or soccer, but have no place in a “gentleman’s sport.”

After reading this story, I no longer believe that tennis is a “gentleman’s sport.” 22-year-old Brian Scagill is sixth-seeded in the world and best of the UK. Though he is fiercely competitive and very focused on winning, lower-ranked Croatian player, Lexi Horvat, captures his interest. As they both have busy lives and do a lot of traveling, Brian and Lexi’s relationship has a richness and passion to it that comes from living in the moment without expectations.

There is a vivid cast of secondary characters, including a supportive coach, a prickly manager, a loving father, and a domineering mother who ultimately wants what she thinks is best for Brian, but ends up wrecking his life.

If tennis is not your thing, the sport details may be a bit excessive. I found them interesting, realistic, and sufficient enough to convey the intensity of competition pressures, the physical challenges, and the conflict between fulfilling media and professional obligations while trying to have a personal life.

I thoroughly enjoyed this story and look forward to the sequel.
Posted by Nancy at 6:00 AM