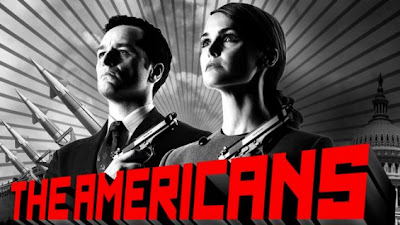 The KGB has determined that this portion of the report on the television program called The Americans does not reveal any state secrets and may be safely read by anyone wishing to learn more about how the brave operatives of the Soviet Union will eventually defeat the capitalist pigs led by the fascist maniac Ronald Reagan.  (In other words, no spoilers in this section.)

The Soviets may have lost the Cold War but per FX’s The Americans it’s a good thing for the US that it was an arms race and not a disguise contest because apparently the Russians had taken wig technology to levels that we never could have matched. They managed to develop hairpieces that would stay on and undetected even when having sex.  There was definitely a wig gap between the two superpowers, and the communists even managed to find some capable agents to wear them.

In this first season we were introduced to Philip (Matthew Rhys) and Elizabeth (Keri Russell) Jennings who appear to be a typical upper middle class couple with two kids and a nice house in the suburbs of Washington DC in 1981.  In reality, they’re undercover KGB agents who have been in America posing as husband and wife since the early ‘60s.

The election of Ronald Reagan as president has the Soviet leadership in a panic since they believe he’s a madman who intends to destroy them.  The Cold War is heating up, and the Jennings have an added complication with their new neighbor, Stan Beeman (Noah Emmerich), an FBI counter-intelligence agent who is part of a team that is hunting Soviet spies under the leadership of their committed boss Frank Gaad (Richard Thomas).

The Jennings also get a new handler that they’re not sure they can trust.  Claudia (Margo Martindale), or Granny as they nicknamed her, is a veteran of the KGB who seems to want to undermine their partnership and does her best to drive wedges between them.

The set-up of doing a spy show during the ‘80s was a great idea, and the twist of making the main characters undercover Russians during the Reagan administration was inspired. If The Americans was just trying to be espionage thriller, it would have succeeded completely with exciting action and a tense cat-and-mouse game between the FBI and the Soviets.  What  made the show special is that the spy games are secondary to the complicated relationships between the characters that raise questions about the nature of love, loyalty and betrayal.

It’s shocking how little Philip and Elizabeth actually know each other when the show begins.  When they were assigned together they were ordered not to reveal any of the Russian background to each other as part of cementing their cover by only knowing each other as Americans. Even after living together for years and having children, they apparently kept a professional distance, but somewhere along the line Philip fell in love with his fake wife while Elizabeth is still somewhat resentful toward him since she got shoved into what is essentially an arranged marriage.

After almost two decades in the US, Philip is starting to question orders and increasingly worried about what would happen to the kids if they’re caught.  He begins the season hinting to Elizabeth that they should consider turning themselves in to the FBI because the knowledge they possess would allow them to cut a deal and probably be given new identities and a small fortune.

On the other hand, Elizabeth is still a staunch believer who would rather die than betray her country, and she’s worried that Philip may have been seduced by the American lifestyle. However, she too genuinely loves their children and after she discovers the depths of Philips true feelings towards her when he goes above and beyond the call of duty to avenge an old wrong she suffered, Elizabeth finds herself falling for the man she’s supposed to be married to.

The constant demands of their spy work make it hard for the two to become closer. Both of them regularly have sex with other people as part of honey-pot operations.  The whole situation makes for an intriguing dynamic that the two of them routinely trust each other with their lives, but they’re far less certain of counting on each other in a budding real romantic relationship.

Marriage isn’t just tough in the Jennings household.  The Beemans across the street are also having problems.  Stan spent a long time undercover while infiltrating a white supremacist movement, and there are strong indications that he may have done some ugly things during that assignment.  He’s having a hard time adjusting to life in the suburbs and is slightly suspicious of the Jennings even as his wife dismisses it as paranoia.  Stan’s intelligence work has him blackmailing a Russian embassy staffer named Nina (Annet Mahendru) into working as a mole for the FBI, but his attraction to her puts more strain on his marriage.


With so many elements in play it would have been easy for The Americans to screw up a few of them, but it showed remarkably sure footing in it’s first season with very few missteps.  The ‘80s setting could have been used for easy jokes or nostalgic references, but it’s treated as a serious period backdrop to the story.  Even when Claudia plays a Ms. Pac-Man game while meeting Elizabeth, it’s used more to tell us something about her character rather than just a wink-n-nudge to the audience.  “I enjoy the maze part and the eating without eating part.  Pac-dots are calorie free.”

The show also showed a deft hand in choosing it’s music.  They passed on the temptation of simply loading up on tons of ‘80s pops songs in favor of picking their spots. (Or perhaps the licensing was too expensive.)   Fleetwood Mac’s Tusk is used incredibly well to build tension during a chase sequence in the pilot, and Peter Gabriel’s Games Without Frontiers was perfect for the wrap-up in the finale.  Juice Newton’s Queen of Hearts helps provide a great touch of humor in which Philip is trying on a pair of cowboy boots at the mall and does a country-n-western dance step in front of a mirror much to the embarrassment of his daughter.  (Like many other immigrants to America, Philip has dreams of being a cowboy.)  The Cure, April Wine, Pete Townsend and Phil Collins also make The Americans' play-list.

Another aspect that works well is that the plot never depends on people behaving stupidly. Philip and Elizabeth are bad-ass agents who are very good at their jobs, and the FBI is also shown as smart and diligent.  Any wrong assumptions that anyone makes are portrayed as reasonable with the information they have at that point.  The smartness helps keep the basic premise viable. The Jennings are skilled enough at deception and covering their tracks to keep Stan from discovering what’s right under his nose, but Stan made significant and steady progress towards locating them throughout the year so that he seems very much like a threat and not some buffoon they can outwit easily.

The only person that could be accused of showing signs of ignorance is a secretary in Stan’s office.  Philip has been getting information from Martha (Alison Wright) by posing as a government agent named Clark who is supposedly secretly auditing the security of the FBI.  As Clark, Philip has subtly gotten Martha feeling attracted towards him and circumstances force him to play up that angle.  It’s hard to see how Martha can make love to Philip while he’s wearing one of his wigs and not know something is up, but the character is played with just the right amount of lonely desperation that we get the impression that Martha is just in denial, not stupid.

One of the things the show plays with is how much can go wrong through just random chance or misunderstanding brought on by the paranoia on both sides.  After the attempted assassination of Ronald Reagan in the fourth episode In Control, both sides are frantic in the aftermath.  The Feds worry that the Russians were behind it.  The Soviets are terrified that it’s a military coup led by Alexander Haig after his ill-advised comments about being in charge after the shooting.

The constant fear of what the other guy is doing puts everyone on such  a  level of alertness that any innocent mistake or miscalculation can result in disaster. One character’s personal jealously leads to an altercation that results in a vast escalation in the conflict between the KGB and FBI. Even random minor accidents such as someone burning their hand on a potato in a microwave kicks off a chain of unintended consequences.

The Americans extends the murky ethics of espionage to the viewers because we’re not entirely sure what kind of outcome we should be hoping for.  Philip and Elizabeth are obviously the main characters and you can’t help but root for them to some extent, but they’re still trying to subvert  the US.  They’re not psychos, but they are trained killers, and both are willing to do heinous things including murdering innocent people in the service of their mission.  The flip side is that the FBI agents have gotten a wink from the Reagan administration to escalate their actions against the KGB, and spilling blood isn‘t out of the questions so nobody’s hands are clean in this.

Still it’s Philip and Elizabeth that seem to want to do what they think of as the right thing as they continue to watch out for each other. We all know how the real Cold War ended, but with The Americans you may find yourself hoping that at least two Russians get a happier ending than history provided.

The KGB has determined the remainder of this report may only be viewed by those who are already familiar with the daring exploits of it’s brave operatives.   Those who don’t know their glorious history but continue reading will be sent to a Siberian gulag.  (In other words, spoilers follow.)

Email ThisBlogThis!Share to TwitterShare to FacebookShare to Pinterest
Labels: kemper, the americans, tv