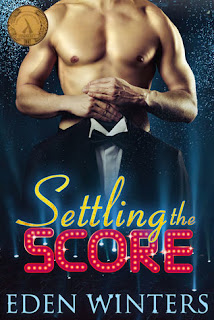 Outed and dumped on national television by his rising star boyfriend, Joey Nichols must face the bigotry of the locals in his small Southern town alone. His dreams of a happy ever after lie crushed at his feet.

Novelist Troy Steele has an axe to grind against Hollywood heartbreaker types. Transforming Joey into a gorgeous, unobtainable hunk would be payback worthy of Troy’s poison pen. It's a brilliant way to get back at Joey’s image-obsessed ex-boyfriend and the movie producer who’s mutilating Troy’s novels.

What begins as simple revenge may tangle them together in something far more complicated. Living well may be the best revenge, but Troy and Joey could rewrite that to loving well.

After a heartbreaking and intense read, I was ready for lighter fare. Settling the Score contained just the right amount of small-town charm and homey comfort with a dollop of righteous revenge and sweet, slow-burning romance.

In spite of the fact that it took some time for me to warm up to Troy, I was instantly enamored with Joey Nichols, a mechanic in rural Georgia mourning the loss of his boyfriend, Riker Sanderson, a vain (“don’t ever fuck with my hair…”), up and coming star anxious to leave his roots behind and make it big in Hollywood.

As if Riker’s rejection wasn’t enough, Joey is subjected to a cruel and very public outing on television before having a chance to break the news to his family. Though his mom, dad and two sisters are loving and supportive, not all the town’s inhabitants are, making life difficult for Joey and his family. They deal with intrusive reporters, hate mail and hostility from the townsfolk.

Enter Troy Steele, a reclusive novelist, burned by a greedy, ambitious screenwriter who is the subject of his novels, and with life experiences very similar to Joey’s, and Erica Davis, his feisty and clever assistant. Together they plan to hire Joey as a research assistant for his latest novel. Falling in love wasn’t part of the plan.

What I enjoyed most about this story was watching Joey’s gradual transformation from a sad and pathetic character who was mistreated by his ex-boyfriend to a man who is self-assured and independent, while retaining his innocence, his kindness and his respect for others. I loved Troy’s assistant, Erica, who was instrumental in helping bring Troy out of his shell, bringing the best out of Joey and Troy, and being a good friend.

“It’s okay to improve yourself, but don’t let me or anyone else take away who you are.”


I enjoyed the brief flashbacks that provided some insight into Joey and Riker’s relationship, and the time Troy and Joey spent working on the novel while learning about each other at the same time. I also loved Troy’s meeting with Joey’s protective father and Cousin Jake’s homebrew that loosens lips.

This was a warm, humorous, and very satisfying story. I can’t wait for the sequel!
Posted by Nancy at 10:32 AM