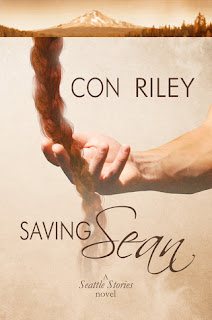 Nearly a year after being rejected for another man, Seattle paramedic Peter Morse is still pining, so when the one that got away asks him for a favor, he agrees. His mission: track down Sean Reid, the runaway brother of a mutual friend. Peter isn’t thrilled about it—until he finds Sean injured by the side of the road.

Everything about Sean stirs Peter’s protective instincts—saving people is what he lives for—but he never anticipated falling for someone so hell-bent on running away. On top of his physical wounds, Sean struggles with grief and guilt, and the mess his estranged father left when he died threatens to overwhelm him.

Saving Sean means Peter must let go of his pride and turn to friends and family. Asking for help is a bitter pill for Peter to swallow, but if he can’t, how can he expect Sean to accept his help—and his love—in turn?


I was debating on whether I wanted to continue with this series or not, as my feelings about After Ben were rather lukewarm.

Though the first story was mainly about Theo recovering from the death of his partner, Ben, and finding love again, there were interesting secondary characters, such as Peter Morse, a paramedic who fell for Theo at the wrong time, and Maggie, Theo’s personal assistant and friend, who was instrumental in supporting him through the worst of his grief. It was my interest in Peter and knowing that he too will find love, that gave me the push I needed to continue reading.

While Saving Sean features characters from the first book, the focus of the story is on Peter and Sean, a young conservationist reeling from the death of his estranged father and coping with the results of his hoarding disorder. He is also a brother to Maggie.

This story shared a lot of similarities with the first one, making it feel somewhat formulaic. In spite of the fact that Theo’s partner was 10 years older, Theo was still very much hung up on age differences, even when he became involved with a considerably younger man. Likewise, Peter is hung up on a physical type. Even though Sean, with his lean build, long red hair, and pale complexion wasn't exactly Peter’s type, Peter fell for him hard and fast, leaving me feeling unconvinced that their relationship is destined to last.

Peter is a smart guy with mostly sound judgment. He worked for 15 years as a paramedic and now travels around the country training firefighters and medical professionals in emergency response. Though he deserves a nice guy in his life, I’m not convinced that Sean is a suitable companion. His unstable personality and erratic behavior annoyed me to no end and made me wonder just what exactly did Peter see in him. Sean didn't need a boyfriend; he needed a therapist. His obsession with his father’s hoard and inability to focus on the task of separating trash from items of value even though he risks losing his home led me to think it was possible he inherited the hoarding gene. Instead of being firm with Sean, Peter allowed himself to become a hostage to his unpredictable emotions. He avoided becoming angry with Sean when he frequently ran away from problems. A healthy relationship this is not. Yeah, I know Sean’s father died before they had a chance to mend fences, but that doesn't give him the right to be a selfish, whiny jerk and be ungrateful to Peter, their friends, and his boss, Vik, who are helping him manage the hoard before his home is condemned.


This made it easy for me to side with Vik’s point of view:

“He’s always looking for reasons. It makes him an excellent researcher – I was sorry to lose him to his own project – but sooner or later he’ll see the bigger picture. He won't be able to save every forest, and he can’t hope to figure out how his dad’s mind worked. Some things are inexplicable.”

Where this story shined for me was the growing closeness between Peter and his dad. While I didn't understand why Peter kept his distance from him for so long, I’m glad they developed a warm relationship. Their interactions were deeply moving.

“I felt like we were on a road trip together. Maybe we should have done that for real while you were younger. It just always seemed like there wasn’t enough time. But I guess that this way, every time you sent another postcard, it was like picking up from the same conversation. Are you home for a while, son? I’ll miss hearing from you if you are.”


His dad was withdrawn since his wife's death, spending hours in his workshop, and while he didn’t openly accept Peter’s sexuality, he certainly didn't condemn him for it. It seems to me that Peter should have been adult enough to establish communication and work past this way before now.

I found the sex scenes between Peter and Sean repetitive, lacking in sensuality, and too frequent, especially towards the end of the book. Maybe it’s because I mostly saw Sean as a child in a man’s body. I didn’t care for the way the hoarding issue was addressed, and I wanted more communication between Sean and his sister. The ending felt forced and unrealistic.

Once again, I’m left with a lukewarm feeling. Despite this, I will read the next story featuring Aiden and Marco, even though I’m expecting more of the same. I must be a glutton for punishment.
Posted by Nancy at 12:02 PM