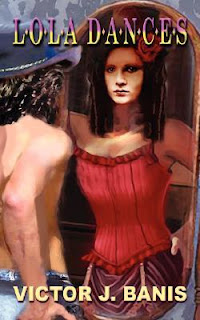 
Sometimes funny, sometimes tragic and often bawdy, Lola Dances ranges from the 1850 slums of the Bowery to the mining camps of California and Montana, to the Barbary Coast of San Francisco.

Little Terry Murphy, pretty and effeminate, dreams of becoming a dancer. Raped by a drunken profligate and threatened with prison, Terry flees the Bowery and finds himself in the rugged settlement of Alder Gulch, where he stands out like a sore thumb among the camp's macho inhabitants--until the day he puts on a dress and dances for the unsuspecting miners as beautiful Lola Valdez--and wins fame, fortune and, ultimately, love.

Little Terry Murphy grew up poor in the rough Lower East Side of New York, and wants nothing more than to be a dancer. His small stature and effeminate appearance make him the target of bullies and the unwanted attention of a wealthy stranger who lurks outside his dressing room after practice. In the 19th century, not only was homosexuality considered immoral, it was also illegal. In order to avoid arrest, Terry and his tough, bad-tempered brother, Brian, flee the Bowery and head out west. While looking for work at a local saloon, Terry finally achieves his dream of becoming a dancer with the abrupt departure of the saloon’s main act. With a skilled application of make-up and an assortment of costumes, Terry is transformed into Lola Valdez, who becomes an overnight success in a small mining community. After a murder, Terry is again on the run, this time to San Francisco. Terry continues to be a hit as Lola Valdez. Despite Terry’s wealth and success, he is lonely and wants to be loved.

Terry’s earlier sexual encounters were fraught with guilt, shame and secrecy. Through an unexpected turn of events, and knowledge of his own heart, Terry finally finds the love and happiness he deserves.

Lola Dances is a suspenseful, gripping and heartwrenching story, rich with historical details and believable characters. I enjoyed the growth of Terry's character as he matures from a shy boy living in a harsh and violent environment, to a self-confident performer, to a young man who knows what he wants out of life and love.
Posted by Nancy at 2:13 PM