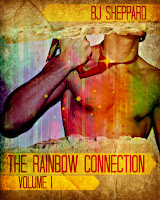 B.J. Sheppard
Self-Published
Reviewed by Nancy
4 out of 5 stars


Living a care-free party life-style, junior journalist and gay lifestyle reporter, Liam Adams thought he had it all; the money, the job, the endless supply of men in his bed. But when his work causes him to question the very foundation of the life he has built for himself, Liam finds certain areas are glaringly lacking. All it takes is one assignment to unravel the very fabric of his promiscuous antics, compounded by the arrival of a long-forgotten tryst. With the rusty screech of the mailroom guy’s trolley wheels, Liam lands head-first in the arms of something bigger; something more.

As the romance burgeons between Liam and the Mail-Manny of his dreams, each article he writes proves to uncover something new and never realized about himself, namely that all the one-night-stands in the world could never give him what he truly wants; love. In a slapstick commentary through the eyes of the world’s most hypersensitive journalist, watch as Liam’s story unfolds in the most ridiculous of fashions, leading him straight into the arms of love, via The Rainbow Connection.

Oh, what a loathsome character Liam Adams is! It was so hard for me to care about him initially, that I was tempted to set aside the book more than once. But who am I to judge? It’s not as if I’ve never made bad decisions, or had contempt for some of my co-workers, or gotten stinking drunk at lunchtime. So I kept reading, and while I never fell in love with Liam, I grew to appreciate his thought process, his sense of humor, his witty sarcasm, his view of the world, and empathized with him that at 28 years old, he has never been in love.

Liam is an aspiring author and works as a journalist for an online gay magazine. He’s good at his job and thrives on deadlines. When he writes an article about the reasons women love to read gay romances, and puts his soul into his work, he begins to see what he’s missing and yearns for more than the casual one-night stands he’s accustomed to.

“I wrote it with hope and I wrote it with my newfound sense of belief that, man or woman, the words of these books were reaching out to people. That it was the journey that mattered. And it flowed out of me like a red wine hangover. Pressure be damned; it was inspiration. I hit send, and off it went, through the interweb to that special place where things go that I have no idea about, ready to be read by our entire readership. I hoped, as I pressed send, that the people who read it would have their own journeys.”


I loved Liam’s relationship with the mail clerk, Manny, that started with a sizzling fuck on Liam’s desk and progressed to dinner and conversation. I also loved his boss, Lourdes, a tiny sassy woman with a penchant for wine.

“On days like these I was glad we were of the same ilk. Any other boss would have canned me on the spot, but not Lourdes. She liked a drink as much as the next hobo and I was completely convinced she sprinkled Prozac on her cornflakes in the morning.”


Liam writes various articles of interest to the gay community and before long, his hilarious and unorthodox methods of research lead to problems in his newfound relationship. At the same time, I enjoyed the solid friendship between Liam and Lourdes and the significant growth in Liam’s character as he and Manny overcome communication barriers and start becoming honest with each other. Once Liam starts to think with his heart, he becomes a much better person, and one I gradually started to like.

Life is never simple, though. With Liam’s boss in rehab, a nasty new boss makes his life very difficult. Even though there is a love interest and hot sex, this is not a typical romance. Each character is unique and well developed, with strengths and flaws. Don’t look for the traditional happy ending, for you won’t find it here. No one is fortunate enough to have everything work out for them, and I’m really glad the author chose to write an unpredictable and more realistic ending. I’m confident that Liam’s strength, capacity for love, humor, and good friends will help him get through life’s difficulties.

I’m very much looking forward to the next installment!
Posted by Nancy at 7:00 AM