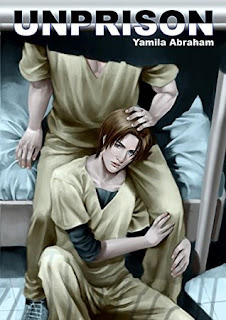 I love the cover and was keen on reading a prison romance. The title, though, led me to suspect that this story would be light on the violence and hardships associated with prison life. In that area, my expectations were met.

Ryan Burgess is an 18-year-old Princeton freshman who likes to party and dabbles in cocaine. Even his rich and influential father could not keep Ryan from getting a 25-year sentence for drug trafficking.

The fear of rape constantly looms in the back of Ryan’s mind, as all the men he encounters are much larger and stronger than he is. He meets a compassionate soul named Donnie who gives him tips on survival and advises him to hook up with Ray Harrison, a 48-year-old long-time inmate who will offer him protection.

“I buried my face in my hands and let out something between a scream and a groan. What the fuck was wrong with me? I’d trusted the first asshole I met here and now he was auctioning my ass off to the highest bidder.”

Though Ray is attracted to Ryan, his primary interest is in friendship. The rest is negotiable. Ray promises that he won’t make Ryan do anything he’s uncomfortable with – either personally or in the various jobs he gives him.

30% into the story, I was sure that nothing bad would happen to Ryan, so I focused my attention on the developing relationship between Ryan and Ray. Though Ryan didn’t want to be called “kid,” he was indeed Ray’s kid and Ray was his “daddy.” Their relationship was sweet and intimate, and the sex kinky and adventurous. While I loved Ryan’s growth in prison, I would have liked some tension, danger, and suffering. Despite that, the portrayal of life in a medium-security prison felt authentic, perhaps even more authentic than what we see in movies or on TV.

Fortunately, Ryan didn’t have to serve the entire sentence and was paroled after three years. The ending felt rushed and the happiness a little too easily earned, but overall this was a sweet and satisfying story.
Posted by Nancy at 5:30 AM