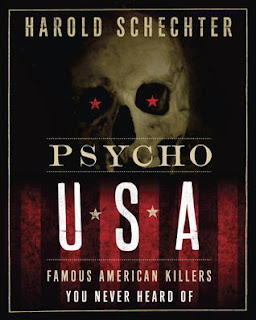 In the horrifying annals of American crime, the infamous names of brutal killers such as Bundy, Dahmer, Gacy, and Berkowitz are writ large in the imaginations of a public both horrified and hypnotized by their monstrous, murderous acts. But for every celebrity psychopath who’s gotten ink for spilling blood, there’s a bevy of all-but-forgotten homicidal fiends studding the bloody margins of U.S. history. The law gave them their just desserts, but now the hugely acclaimed author of The Serial Killer Files and The Whole Death Catalog gives them their dark due in this absolutely riveting true-crime treasury. Among America’s most cold-blooded you’ll meet

• Robert Irwin, “The Mad Sculptor”: He longed to use his carving skills on the woman he loved—but had to settle for making short work of her mother and sister instead.

• Peter Robinson, “The Tell-Tale Heart Killer”: It took two days and four tries for him to finish off his victim, but no time at all for keen-eyed cops to spot the fatal flaw in his floor plan.

• Anton Probst, “The Monster in the Shape of a Man”: The ax-murdering immigrant’s systematic slaughter of all eight members of a Pennsylvania farm family matched the savagery of the Manson murders a century later.

• Edward H. Ruloff, “The Man of Two Lives”: A genuine Jekyll and Hyde, his brilliant scholarship disguised his bloodthirsty brutality, and his oversized brain gave new meaning to “mastermind.”

Spurred by profit, passion, paranoia, or perverse pleasure, these killers—the Witch of Staten Island, the Smutty Nose Butcher, the Bluebeard of Quiet Dell, and many others—span three centuries and a host of harrowing murder methods. Dramatized in the pages of penny dreadfuls, sensationalized in tabloid headlines, and immortalized in “murder ballads” and classic fiction by Edgar Allan Poe and Theodore Dreiser, the demonic denizens of Psycho USA may be long gone to the gallows—but this insidiously irresistible slice of gothic Americana will ensure that they’ll no longer be forgotten.


I discovered Harold Schechter while taking criminal justice electives toward my degree in General Studies. During my Intro to Criminal Justice class, I read Deranged, a bone-chilling account of one of the most monstrous of serial killers. Arrested for the kidnapping and brutal murder of 10-year-old Grace Budd, Albert Fish confessed to kidnapping, torture, rape, murder and cannibalism of many more young victims. Though the subject matter was deeply disturbing, this was quite possibly one of the best true-crime books I’ve ever read. During my Juvenile Justice class, I picked up Fiend, the story of Jesse Pomeroy, the youngest person in Massachusetts to be convicted of first-degree murder. Because he was only 14, his death sentence was commuted to life in prison. Then I read Fatal, about Jane Toppan, a nurse guilty of poisoning numerous elderly patients in her care.

I like Harold Schechter’s writing style. His books are well researched and rich in historical details. Not only is he skilled at bringing the past to life, he excels in exploring the mindset of individuals and societal attitudes at the time the crimes were committed.

Though I have a few more of his titles on my shelf, I haven’t read any more until I recently borrowed a copy of Psycho USA from the library. This book is different in that this is a collection of short accounts of little-known criminals from the past. In the introduction, Schecter explains why certain crimes are forgotten while others remain vivid in our collective memories.

“The crimes that come to define an era tend to be those that reflect its most pressing anxieties.”


Unhappy with rising taxes, increasing financial difficulty and wanting revenge on his community, Andrew Kehoe set off explosives that destroyed a school and his house and farm, killing his wife along with 38 children and injuring 58 others. Not only was this crime eclipsed by Charles Lindbergh’s transatlantic flight, Americans were just not fearful of terrorism in 1927.

There are poisoners, serial killers, kidnappers, torturers, and rapists. Some were mentally ill, making me wonder if psychological intervention could have prevented their crimes. I was shocked by the number of criminal and accidental deaths due to poison in the Victorian era, a time when there was no control over sales and people needed affordable ways to control vermin.

The stories are presented chronologically, starting with the late 1700’s and ending with 1961. While I enjoyed these snippets, I prefer the author’s full-length books that go into much greater detail.
Posted by Nancy at 9:08 PM