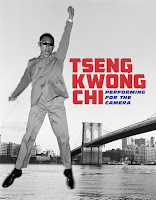 
This volume is the first comprehensive survey of the work of Tseng Kwong Chi (1950--90), a revered photographer and performance artist of the 1980s. Reproducing more than 100 works by Tseng from the late 1970s to the late 1980s, and including archival materials from his commissions for the Soho Weekly News, the book presents Tseng's best-known self-portrait series, East Meets West, as well as lesser--known works, plus portraits of his friends Keith Haring, Jean-Michel Basquiat and Kenny Scharf, among others.

“My photographs are social studies and social comments on Western society and its relationship with the East. [I pose] as a Chinese tourist in front of monuments of Europe, America and elsewhere.”
― Tseng Kwong Chi

After reading Keith Haring’s biography by John Gruen, I became increasingly curious about Tseng Kwong Chi, the photographer who documented Keith’s subway drawings and was known for his own gently satirical work, including East Meets West, which features himself in a Mao suit in front of major American and international tourist sites, and his final work, the Expeditionary Series, contemplative photographs taken in the US and Canada and featuring the artist as a diminutive figure dwarfed by the majestic landscape surrounding him. During the Reagan era, the artist had fun photographing influential conservatives for his Moral Majority series.

Tseng Kwong Chi’s work was playful, yet deep and thought-provoking. I enjoyed revisiting his photos of Keith Haring and his work, and the other artists who participated in the East Village 80’s art scene, such as Kenny Scharf and Jean-Michel Basquiat.

Sadly, Tseng Kwong Chi died of AIDS complications in 1990 at the age of 39.

This is a wonderful coffee table book with thick pages and crisp color and black and white photos. I enjoyed the thorough analysis of the artist’s work, and the last story written by his sister, Muna Tseng, which was a glimpse into the artist’s childhood and family life.
Posted by Nancy at 3:24 PM