The Gifts of O. Henry

The Gift of the Magi and Other Short Stories by O. Henry
Reviewed by Jason Koivu
My rating: 4 of 5 stars

I spent a month in Austin in 2016. It was good. Thanks for asking. While there my wife and I visited the William Sidney Porter House museum in the downtown area just one block south of the super busy party-central 6th St. 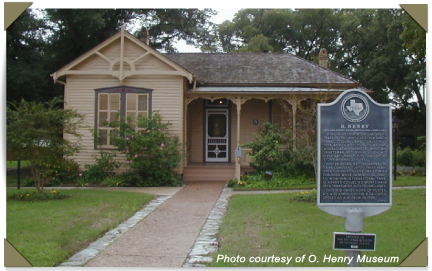 (Kind of odd to come across this little, old house in the middle of bustling downtown Austin)

William Sidney Porter is the real name of O. Henry, who lived only briefly in Austin before moving on to Houston. Nonetheless, it was cool to go into the house and see the old place, as well as his special writing nook.

Porter was a clever guy. His short stories often end with a surprising little twist, a little more subtle than your typical M. Night Shammalammadingdong movie. This collection is...well, it's not the actual collection I read, but it's close enough. There are tons of O. Henry collections listed on GR and I can't find the one I read. But the length is about the same and I believe the stories mostly match up.

Once upon a time when I was a young man, I read "The Gift of the Magi" and really enjoyed it. I promised myself I'd read more of his stuff. Then I let about three decades slip by until deciding I'd let the notion marinate long enough. I'm glad I finally got around to reading more. Although, I was a little confused at the start.

The first story was "The Voice of the City" and I was not prepared for it. His style, language, and pure-and-simple smarts had me befuddled and jogging to catch up. However, after that it was smooth sailing. I believe "The Gift..." was up next, and it was nice to revisit that one. Then the book slides into delight tales like "The Ransom of Red Chief", "The Romance of a Busy Broker", "The Green Door", "The Hiding of Black Bill", and "The Cop and the Anthem".

Not every story is a winner. Sometimes I got a bit bored. But overall this is a good collection and a nice primer for a prolific short story writer.

View all my reviews
Posted by Jason Koivu at 4:30 AM