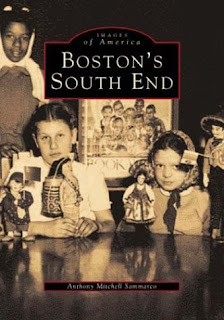 Originally a narrow, barren strip of land known as the Neck, Boston's South End grew from a lonely sentry post and execution grounds to what is today the largest Victorian neighborhood in the United States. With the filling of the South Cove in the 1830s, the area became one of the greatest planned residential districts of its time, a heritage preserved in unique architectural features such as red brick swell bay facades, elaborate balusters, and fanciful porches.

This is a nice pictorial history of the South End in Boston, MA. The neighborhood is known for its Victorian style houses and parks. It was once known as the Neck, a barren strip of land connecting Boston to the city of Roxbury that was once the site of executions. The South End is now a flourishing neighborhood, home to a diverse population and known for its restaurants, boutiques and art galleries. Though the South End is very expensive, there are a number of low-income housing projects.

The pictures featured here include schools, hospitals, the library, businesses, and transportation. There was an interesting tidbit about Dr. Mary Jane Blake-Safford, among the first female gynecologists in the US and a lecturer at Boston University. There are pictures of trolleys, a perfectly efficient and inexpensive mode of transportation that gave way to cars and buses. Like many urban areas, the South End underwent urban renewal, demolishing many old buildings. It would have been fun to see some “then and now” pictures. Instead, I found myself referring to Google Maps to see how some areas stayed exactly the same while others were completely changed.

Reading this makes me want to learn more about the neighborhood I enjoy hanging out in.
Posted by Nancy at 5:00 AM