When One Door Opens 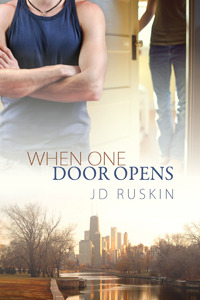 J.D. Ruskin
Dreamspinner Press
Reviewed by Nancy
4 out of 5 stars


Logan Sellers's parole officer has issued three commandments: stay sober, stay employed, and stay out of trouble. At first Logan thought those three simple rules would be easy to follow. But that was before he accepted a side job assisting his boss’s housebound agoraphobic nephew, Caleb.

Caleb is deceptively normal for a guy who hasn't left his apartment in three years, and his friendly, caring personality tugs on heartstrings Logan didn’t know he had. But hitting on his boss’s nephew is asking to be unemployed. Logan has enough problems with booze on every corner and a supervisor trying to jump into his bed. He doesn’t need to work out how to free Caleb from the anxiety that keeps him in his apartment; he needs to keep his nose clean, attend his AA meetings, and make a fresh start—alone.

If only his heart would get with the program.


I think I may have a mild case of agoraphobia. The last time I experienced a little panic attack was several years ago while I was in Poland. I wanted to go to church and light candles for my close family and friends who passed away while there was no mass in session. But no, my husband’s parents insisted we attend mass. Even though we arrived 5 minutes before mass started, there was a line of people starting to form just outside the door. All the pews and most of the seats were occupied, but we did find just enough room somewhere in the middle. Once we were seated, I let go of that breath I’d been holding. When mass was over and everyone got up to leave, I gradually inched my way to the door until the sea of people was no longer moving. Even with my husband and his parents standing right behind me, I felt totally vulnerable. What if a fire started? What if people got trampled or suffocated? What if someone noticed my flushed cheeks? Suddenly I felt faint and broke out into a sweat. I had a wild urge to start screaming and pushing the people standing in front of me in order to get the crowd moving. We eventually got out and I took many invigorating breaths of cold air. My mother-in-law realized she left her scarf behind and looked in my direction. I shook my head and told her she was on her own. No way was I going back in there.

Caleb’s problem is so much worse. He hasn’t left his apartment in three years, not even when the radiator broke or when he fell in the shower and seriously injured himself. I never really thought about how dangerous this affliction can be until after spending time with Caleb and feeling his fears and anxiety.

Logan has his own issues to deal with. A woman comes on to Logan at a bar and her jealous boyfriend takes a swing at him. Fueled by alcohol and rage, Logan pummels the guy who took a swing at him into the ground along with injuring three unfortunate patrons who tried to restrain him, one of them his best friend, Michael. For that stunt, he spent a year in prison. Now he’s on parole, attending anger management classes and AA meetings. Logan works as a package handler and is trying hard to avoid the temptations of alcohol. A relationship is the last thing he needs, but when he starts his part-time job delivering packages to his boss’ nephew, Caleb, Logan’s resolve begins to crumble.

Caleb is blond, cute, and has a good heart. In spite of his affliction, Caleb is a very strong character. He has a successful web design and editing business and is determined to maintain his independence even if he is unable to leave his apartment. Caleb and Logan are really good together and both are willing to work hard to help each other stay strong as they confront their issues. I loved their humorous banter and their growing connection. The sex scenes were light and infrequent, and though I loved the fact that the emphasis was on the developing relationship, I would have liked to see more buildup of sexual tension. At times, their sex seemed brief and perfunctory. Caleb’s agoraphobia was handled sensitively and felt authentic. I found his progress, struggles and setbacks believable. There is no simple cure and the road to recovery continues to be bumpy. Logan’s struggles were also believable, but I would have liked to see a glimpse of his past and how he came to struggle with alcohol. Much was made of his height, physical strength and dominant behavior, and little of his vulnerable side.

There are lots of wonderful and fully-developed secondary characters. Harrison Klass, the floor manager, and Caleb’s uncle is a man with secrets, guilt and regrets, but he wants what’s best for Caleb. John Dabb is Logan’s parole officer with a penchant for M&M’s and secrets of his own. Stacy is Logan’s AA sponsor and was instrumental in helping him find the right meeting. There was Min and her grandfather of Meng’s Market, who fulfilled Caleb’s grocery orders and the friendly old woman who lives across from Caleb. And there was Logan’s best friend Michael who demonstrated his investigative skills, but got such short shrift in this story.

So why ruin this story with a tiresome, loathsome, one-dimensional villain like Karen Foster? Karen is Logan’s supervisor and the kind of woman everyone loves to hate. She’s a liar, manipulator and a thief who uses sex to further her agenda and makes Logan’s and Caleb’s lives difficult. I know she was there to provide an opportunity for Logan to manage his anger, but I could have done without her and her machinations which did absolutely nothing to enhance the plot. Then again I might have enjoyed this subplot if Karen were a different sort of character.

This is a very well written and cleanly edited story. Despite its flaws, I thoroughly enjoyed it and hope to see more of Caleb and Logan.
Posted by Nancy at 3:50 PM