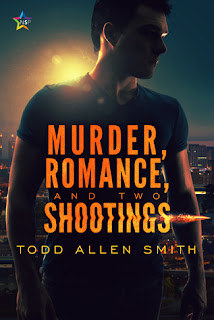 The scent of his own blood shakes away the disbelief of the gunman entering the city council room. Todd remembers that smell and can’t deny that he is once more the target of a gunman’s bullet.

Healing from his physical wounds is the easy part, grounded in gratitude for his very survival. Rebuilding his life will be the hard part. But he is reminded he is luckier than others whenever he thinks of his friend Rick who was murdered.

After the first time he was shot, Todd had to learn to walk again, but now he faces the bigger challenge of learning how to love.

I expected a dark, edgy thriller with a smattering of romance. What I got was something entirely different.

Author Todd Smith had the misfortune of being shot not once, but twice. The first time was during a robbery attempt after moving to a new city. The second occurred on his job reporting on the Kirkwood City Council meeting after he returned to his home state of Missouri. An enraged citizen, complaining of how the city was screwing him over and hurting his business, was responsible for multiple fatalities, include that of the mayor. Todd was lucky to escape with his life, though he suffered a serious gunshot wound to the hand.

This is not a thriller, or romance, or crime novel. It is a fictional account based on the true story of Todd Smith’s life. While names, characters, places and businesses may have been the products of the author’s imagination, it was clear that Todd Smith, the main character, was the author. While the reader learns of the grim circumstances surrounding Todd’s two shootings and the brutal murder of a close friend, we get to watch him grow as a character and get a glimpse of his friendships, his co-workers, his family and his relationships.

The story was fraught with minor errors that I hope were caught in the final version, shallow characterization, and stilted dialogue. I knew that Todd felt pain when he was shot. I knew he grieved over his friend Rick’s brutal slaying. And I knew that he was in love with David. I just couldn’t feel any of it.

Blatant authorial intrusion early in the narrative was disconcerting and confusing. Was I reading a memoir or a novel? The journalistic reportage and dual presence of author and character kept me distant from people, places, and events. I wanted Todd the character and not Todd the author.

Perhaps this would have worked better as a memoir. Though the story was compelling and held my interest throughout, the style left me cold.
Posted by Nancy at 3:14 PM