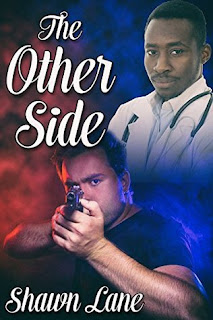 
Dr. Ray Carmichael is a wealthy African-American doctor and political activist running for office on the platform that the brutality and corruption of the local police force is out of control. Nick Sorenson is a white cop who grew up poor and almost lost his life in gangs and crime before turning his life around by joining the police force.

When Ray’s brother is beaten by a couple of police officers after a traffic stop, Nick is the Internal Affairs detective put in charge of investigating the incident. Dr. Carmichael's obvious distrust of the police force rubs Nick the wrong way, and the man becomes a pain in his neck. Too bad, because neither of them can deny their attraction to each other.

Ray has Nick removed from the case when he decides he’d rather date the man than fight with him. In spite of their differences, they begin an affair and grow closer. Until an explosive incident at a family gathering puts nagging doubts in Nick’s head -- he's not sure if they can overcome the differences that separate them.

When Nick is about to lose everything important to him, will he realize his budding relationship with Ray is worth trying to see the other side?


I read The Other Side in one sitting and was blown away by the intensity and emotional depth of this story. Dr. Ray Carmichael is a wealthy African-American doctor who is running for political office and has little use for the police department. Nick Sorenson is in charge of the investigation of police misconduct involving the beating of Ray’s brother. In spite of the obvious differences between the men and the conflicts that stem from their value differences, there is no denying the physical attraction they both have for each other.

I’ll admit it took me a little while to warm up to the hoity-toity Dr. Carmichael, with his custom-tailored suits, Bel-Air mansion, and full housekeeping staff. What did he know about the real world, the struggles of poor and working-class people, the cars that won’t start, the low-paying jobs, the impact of drug abuse on the addict and their family?

At first, I thought there was no way a relationship between Ray and Nick could ever work. They had different upbringings, came from different social classes, and had different problems. Boy, was I ever mistaken! I enjoyed watching these two men as they struggle, resolve conflicts, and develop love and respect for each other.

A very moving, sexy, and satisfying romance! I will definitely be looking for more of Shawn Lane’s work.
Posted by Nancy at 3:55 PM