A NEW HOPE FOR MEXICO: SAYING NO TO CORRUPTION, VIOLENCE, AND TRUMP'S WALL

A New Hope for Mexico: Saying No to Corruption, Violence, and Trump’s Wall by Andrés Manuel López Obrador
My rating: 5 of 5 stars

”As the great novelist Carlos Fuentes wrote, ‘When we exclude, we lose. When we include, we win, and we shall never recognize our own humanity without recognizing that of others.’” 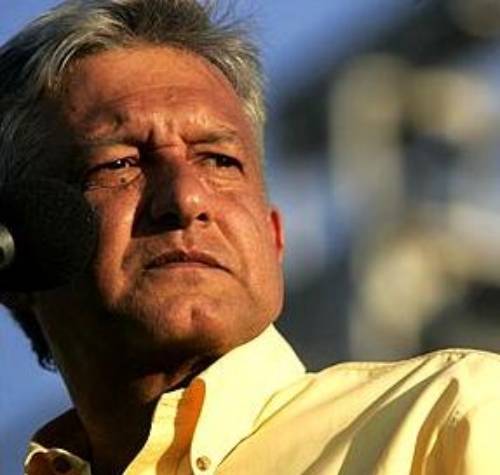 Andres Manuel Lopez Obrador will take office as President of Mexico in December 2018. I can not be more excited for our neighbors to the South. While in college at the University of Arizona, I took a class on Mexican history as a summer course. It was an intense, comprehensive class that left me exhausted and with a swimming head in the desert heat as I walked home to my house just off campus. I was particularly taken with the series of revolutions that happened. The peasants would rise up and throw out a corrupt dictator, and then their leader, for whom they shed blood, sweat, and tears, would become as corrupt as the dictator they had overthrown. Reset: new revolution, more peasant blood, sweat, and tears, and another dictator replaced by yet another corrupt dictator.

I had heard good things about Lopez Obrador, so when Alex Doherty from OR Books/Counterpoint contacted me about reviewing his book, I said, “FRILLING A!”

Lopez Obrador gave a series of speeches while campaigning for the presidency titled Oye! Trump! He was running against the corrupted neoliberalism that had gripped his country for too long, but he was also running against the whole idea of what Trump stood for and the harsh rhetoric about immigrants that Trump used to bring his base to a frothing, Build a Wall chanting, Fake News believing, children separated at the border supporting mob.

Trump called immigrants rapists. All of them. How many immigrants would have to be convicted rapists before you could call them all rapists? 60%, 30%, 10%, 2%?

When I lived in Arizona, I worked for a bookstore chain, and we opened a store in Mesa. I was in charge of the project, and even though the labor was subcontracted to renovate an old grocery store into a bookstore, I spent a lot of time with the mostly Mexican workforce. They called me jefe and were always respectful, even though I was a young, brash, just out of college, white guy in way over his head and stressed to the max. I’ve never seen people work harder. Their work ethic is still the bar I use for myself.

Lopez Obrador does not want that labor leaving Mexico. He wants them staying and helping to rebuild their country. He has a plan on how to do that. He wants to bring agriculture back to the level it was several decades ago. There is no reason for Mexico to be importing food when they have so much rich and fertile land. If he can do this, he will not only save the pueblos but keep young people in their communities instead of fleeing to the overcrowded cities, or worse immigrating to America.

He also wants to replant thousands of acres of rainforest. I am a big lover of trees, and I also understand the importance of the rainforests of the world in maintaining our beautiful climates. Make it so Obrador!

Corruption is the biggest issue that Mexico faces. Overpaid government officials are a disgrace to Mexico. Corruption in government has allowed the rampant crime rate to spiral out of control. To stop violent crime, Lopez Obrador has determined that the best place to start is ending the corruption at the top. Crime can not be fought at the bottom of a social pyramid if the top of the pyramid is corrupt.

“The rise of neoliberalism over the last thirty years (which has entailed privatization, abandonment of our rural areas, economic stagnation, unemployment, neglect of our youth, inequality, and corruption) ushered in the crisis of violence and instability that plagues us today.

This corruption and looting of the Mexican economy by the rich has left the Mexican people with three choices: attempt to survive in the informal economy; migrate to the United States; or survive through criminal activity.”

Carlos Salinas was elected President of Mexico in 1988. At the start of his reign, there was one billionaire in his country, and by the end of his reign in 1994 there were 24 billionaires in Mexico. This was all due to the banks, companies, and mines, that were at one time owned by the government, being allowed to be privatized. The wealth that was taken from Mexico and given to a handful of people is staggering. Lopez Obrador does not want Mexico to be more like the United States. He wants it to be better, and one way to do that is to reclaim what belongs to all of Mexico.

Redistribution of wealth is one of those terms that make Republican-- you know what-- pucker. If the few end up owning everything worth owning, we will be a feudal society. Under Presidents W. Bush and Obama, the gap between the 1%ers and the rest of the country widened astronomically and has continued under President Trump. We are ruled by an oligarchy of rich, white guys. The free market economy, that we all grow up believing we can be a part of, is a myth. Trickle down economics, which has failed every time it has been attempted, including most recently in the state of Kansas where I live, is a term that makes my-- you know what-- pucker. As Lopez Obrador says, money is not water. It does not trickle down. It does seem to be very good at fluttering back up to the top. 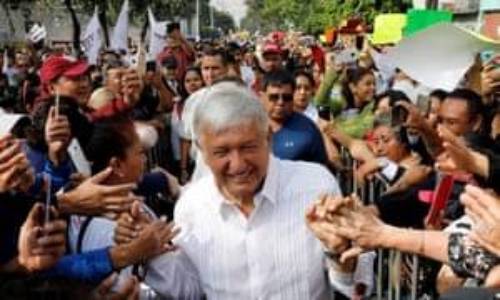 If Lopez Obrador can do what he says he will do in this book, Mexico could very well become a shining beacon. His plan is bold. He will have to rebuild Mexico’s policies along with the infrastructure that will lead them back to economic prosperity. The resources are there; all they have to do is be managed by someone who is wanting to make the lives of millions better, instead of allowing 24 billionaires to continue to get richer at the expense of the people. 24 billionaires only have 24 votes though their money may buy more.

I will keep an eye on President-elect Andres Manuel Lopez Obrador. He is going to make a lot of enemies, but if the people stick with him, he could make it so any wall on the border is more to keep Americans out of Mexico than Mexicans out of America.

***Special thanks to Alex Doherty and OR Books/Counterpoint for sending me this book in exchange for an honest review.***

Posted by JEFFREYKEETEN at 6:56 AM