BORN TO BE POSTHUMOUS: THE ECCENTRIC LIFE & MYSTERIOUS GENIUS OF EDWARD GOREY BY MARK DERY

Born to Be Posthumous: The Eccentric Life and Mysterious Genius of Edward Gorey by Mark Dery
My rating: 5 of 5 stars

”Only now are art critics, scholars of children’s literature, historians of book-cover design and commercial illustration, and chroniclers of the gay experience in postwar America waking up to the fact that Gorey is a critically neglected genius. His consummately original vision--expressed in virtuosic illustrations and poetic texts but articulated with equal verve in book-jacket design, verse plays, puppet shows, and costumes and sets for ballets and Broadway productions--has earned him a place in the history of American art and letters.” 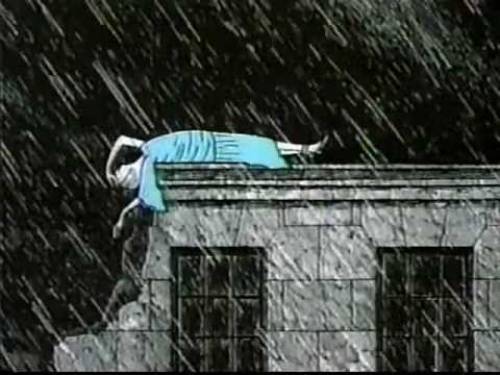 I first experienced Edward Gorey without even knowing I was in his world. The introduction to PBS’s long running series MYSTERY! was where I first brushed up against the uniqueness of Gorey’s imagination. I was in 8th grade. I can remember sitting there completely taken aback, unsure of what I’d just seen, but I knew I’d never seen anything like it before. Every week I watched the opening very carefully looking for anything that I missed the week before. It never occured to me to find out who the creator was of this wonderful opening or pursue other work by him. I wasn’t a fully developed researcher and collector of those things that pleased me...yet.

So when Little, Brown contacted me to see if I was interested in reviewing a biography of Edward Gorey, I felt a whole host of emotions. A) Even though I had occasionally browsed his books, I had never really allowed myself to be seduced by his work. B) I’d been in a Victorian phase for many years now and still had never delved into the carefully cross-hatched Victorian figures that Gorey created. C) This book could be the impetus to encourage me to finally launch a full out investigation of all things Gorey. D) I was thrilled with the opportunity to maybe finally close a circle begun when I was 13 years old. 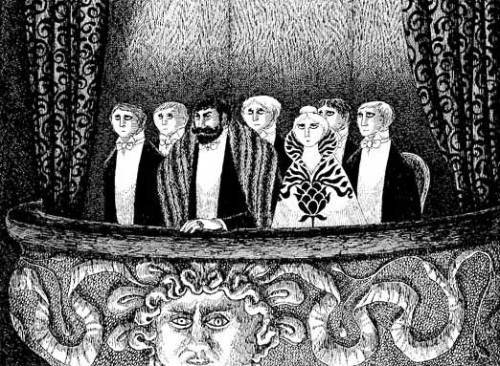 Gorey was all that I hoped he would be. He was a voracious reader. He took a book with him everywhere so that any time he found himself waiting in line or stuck in a boring situation he could pull out his book and take himself elsewhere. He had over 21,000 books in his library at his death. He watched over 1,000 movies a year. Think that is impossible? Not if you don’t sleep. He was a huge fan of Buffy the Vampire Slayer, cats, and, most of all, Balanchine's ballet performances. To list all the things he enjoyed would maybe be contained in a scroll ten feet long if one wrote them in small, spidery script.

Gorey considered himself asexual. ”Thomas Garvey coins the useful term glass closet to describe ’that strange cultural zone’ inhabited by people in the public eye who ‘simultaneously operate as both gay and straight. Gorey kept perfectly mum about his true nature to the press; he only spoke about it in his art.’” I think that Gorey did not want to be pigeonholed as anything really. He was fussy about just being considered an artist when he really saw himself as a writer first. He was flamboyant in his appearance with wearing floor length fur coats year round and sporting rings on every finger. Supposedly, there was a lot of gay coding into his artwork for book covers that he designed for writers such as Herman Melville for Anchor Books. Looking at any form of art with an eye for overt or hidden symbols always makes me a bit nervous. Sometimes you find what you are looking for because that is what you want to find.

That all said, every crush that Gorey had throughout his life was some form of unrequited love for a member of the same sex. I wonder when we will reach a time when we are not categorized by our sexual preferences. Gay musicians/artists/politicians, etc. are still pressured by interest groups to declare their sexual preference, but by doing so they are generally suddenly defined first by their sexual preference, and everything else they do almost becomes a footnote to that revelation. 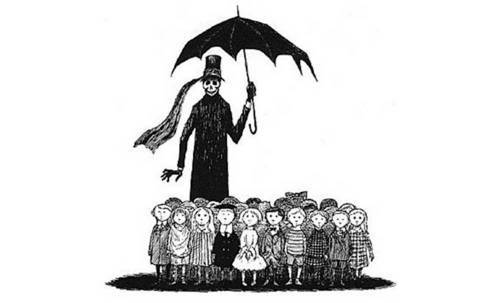 The melancholy deaths of Gorey’s children.

His books were dominated by infanticides. They caused parents to be uneasy and made it hard for booksellers to categorize his work. The awkward size of his books was also difficult and forced many publisher’s to design counter displays for his books at the register. Kids, in general, I have found, love his books. The creative deaths of the children in his books could be scary, but we do like to be frightened, especially when Gorey leads us onward to an ending that leaves us smiling.

He didn’t mind confusing us either. ”N is for Neville who died of ennui.” Or how about this one: ”Still later Gerald did a terrible thing to Elsie with a saucepan.” What terrible thing could anyone do to another person with a saucepan? The mind of the reader was forced to ponder and ponder some more. Usually, I ended up laughing at the scattershot directions that my mind went, trying to pluck the right thread that would lead me to where Gorey intended me to go. Or maybe he wanted the readers to lead himself to his own meaning. 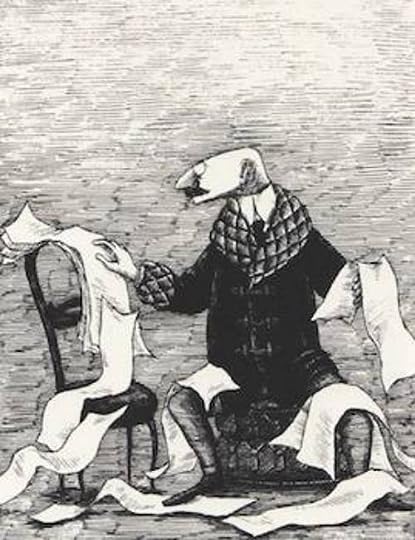 One of my favorite stories of his was ”The Unstrung Harp”, which was about a writer named (C)lavius (F)rederick Earbrass. ”’The best novel ever written about a novelist,’ Graham Greene called it in all apparent seriousness.” The book covered all the hazards of a writer’s life: ”disappointing sales, inadequate publicity, worse than inadequate royalties, idiotic or criminal reviews, terrors of the deadline and the blank page.” 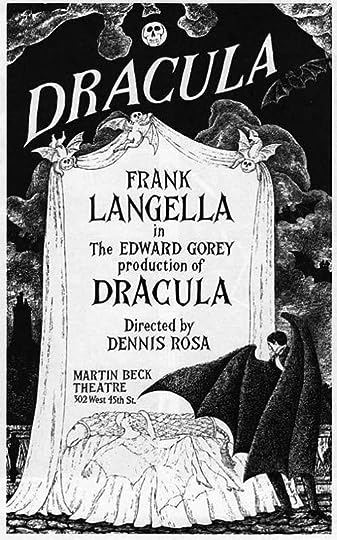 The idea to have Gorey design the sets for the Broadway production of Dracula was simply a moment of brilliance. He threw himself completely into the project with “every leather-bound volume lovingly rendered of the books in Dr. Deward’s sanatorium library”. The bats, skeletons, death’s-head pansies, coffins, mummified corpses, Dracula’s watch chain strung with teeth, the drapes, and the exquisite wallpaper were all drawn with delicate care. This showed the world that Gorey was much more than just a cartoonist or “children’s” book author or really categorized any which way except that he was capable of showing exceptional talent in whatever medium he chose to express it. The show ran for 925 performances over three years and made Gorey a wealthy man. 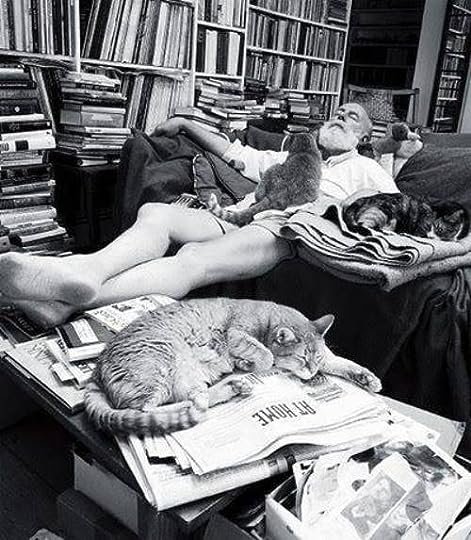 I was constantly, gleefully googling arcane references while reading this book. Gorey’s interests were wide and varied. By reading about his interests, I expanded my own passions, and really anyone who cares about the creative process should read this book. He was a Renaissance man, not only in talent but also in the way he found the world so fascinating. People might have been disappointing, but then he could always create more acceptable characters with the nib of pen. I will certainly be pursuing many more lines of inquiry inspired by this book. Mark Dery will take you on a journey into the development of a creative mind and introduce you to a man who figured out a way to live his life the way he wanted to. So few of us get that opportunity.

My thanks to Little, Brown who supplied me with a free copy in exchange for an honest review.

Posted by JEFFREYKEETEN at 9:51 AM