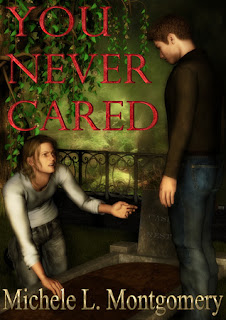 Michele L. Montgomery
Self-Published
Reviewed by Nancy
3 out of 5 stars


Jordan is a golden child — wealthy, popular, the self-professed ruler of the senior class. Jordan is also a bully, a bully whose group of friends mercilessly tormented seventeen-year-old Casper for being different, for being poor, for suffering silently. Random acts of abuse from his classmates were par for the course in Casper’s life, until one night, the bullying evolved into a hate crime and he, unable to endure, longing for peace, finally took his own life.

You Never Cared is the heartbreaking tale, told in Jordan’s words, of a life stolen, of love lost, and of a soul compromised. But ultimately, it is a story of forgiveness and redemption. As Sammy, Casper’s friend and lover, attempts to cope with the anguish of his boyfriend’s loss, Jordan attempts to own his part in the crime, trying to make amends but knowing his only hope is to carry on Casper’s legacy, to work to build a better future for boys and girls who, like Casper, just need a strong voice to encourage and stand up for them.

Bullying is an epidemic that has troubled teachers and students for years. The psychological and degrading effect it has on its victims is far more lasting than any physical wounds.

I am glad there are realistic works of fiction, such as this story, that explore the negative effects of bullying on the victim, the victim’s classmates who witness the bullying, and the bullies themselves.

17-year-old Casper takes his own life as a result of bullying that has gone too far. This story is told from the perspective of Jordan, who allowed his friends to torment Casper, and who was once his friend until their lives went in separate directions.

Sadly, this story did not have the emotional impact on me that it should have. Maybe there were too many “I” sentences, too much introspection, too much telling and not showing. I just couldn’t feel Jordan’s pain, suffering, and remorse, while Sammy’s agony broke my heart. I wanted to understand why Jordan allowed a friend to suffer and I wanted to be convinced he was sorry, but I didn’t like him any better at the end than I did at the beginning.
Posted by Nancy at 10:57 PM