The Darker Side of Trey Grey 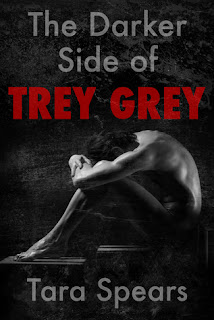 Tara Spears
T.O.S.O.L. Books
Reviewed by Nancy
3 out of 5 stars

No one told Trey Grey that life could be dark and unpredictable. With the death of his father when he was eight, his mother’s departure from Earth on a syringe full of Heroin and the brutal abuse of his stepfather, Trey learned these lessons all too well on his own.

Now at twenty years of age, he is nearing the completion of his accounting degree and can finally glimpse the end of his life as a prostitute, the only profession he has ever known.

Wracked by nightmares of Willie’s years of abuse, and controlled by severe obsessive-compulsive disorders as a result, he seems to have a tentative handle on his own life. That is, as long as he keeps a death-grip and no one touches his Camaro, kitten.

But even the best laid plans can be torn to gory bits.

His savior comes in the unlikely form of a spiky-haired blond named Justin, after a night of drunken debauchery that neither of them seems able to forget. Justin might just need Trey as much as Trey needs him.

Trey travels through his fearscapes and begins to find his own forgiveness, but at what cost to the manic-depressive Justin? Will they be able to live through the trauma of each other’s lives and find their own version of normal?

First off, I really hope that the author sent me an uncorrected review copy and this was not the final published version. I would have been very annoyed if I had paid $3.99 for it. Though my tolerance is higher for errors in self-published books, there were so many here that they threw me out of the story on many occasions. Typos I can handle, but constant misuse and abuse of words was much harder to put up with.

The club was roué, fashionable and raunchy all at once.

She has a reprobation toward sex.

My hips thrust fallaciously…
And it goes on…

The woman-hating that goes on in the m/m romance genre is so prevalent, that it wasn’t a surprise to me here. It’s OK to include well-developed, interesting, intelligent female characters with full lives in stories that focus on men’s relationships. Women are part of men’s lives too, if not as lovers, then certainly as mothers, sisters, friends, or co-workers. They don’t all have to be bitchy, bitter, lonely, gossipy, or meddlesome.

There were inconsistencies in this story that were a little off-putting. Halfway in, Trey and Justin knew each other for a week. 232 pages later, they knew each other only 3 days. In either case, they fell in love just a little too quickly for my liking, particularly considering Trey’s history of physical and emotional abuse, his mental illness, and his years working as a prostitute. Justin, like Trey, has difficulty with relationships. He is also deeply insecure and suffers from depression. Even though this is Trey’s story, I wish Justin’s mental illness was portrayed a little more convincingly. He was a very strong character while supporting Trey and didn’t show evidence of his depression. Other times, he was needy and insecure.

Some of the medical and psychological aspects didn’t ring true either. I’m far from an expert, but I would think if you stab yourself with a 3-inch wide butcher knife, you would do more damage than just nick your diaphragm. Trey’s suicide attempts and self-harming behavior were treated far too casually. Realistically, he would have had to be evaluated by a psychiatrist and receive extensive treatment, or even hospitalization, if he was determined to be a risk to himself.

Trey’s physical, sexual and emotional abuse by his stepfather was shown in flashbacks. He had recurring nightmares, and difficulty enjoying sex, until Justin entered his life. Despite the inconsistencies and inaccuracies here, I felt the author realistically portrayed the effects of severe child abuse on adult survivors and created two broken but strong characters that were very easy to care about.

I enjoyed being a part of Trey’s and Justin’s lives as they handle their struggles and cope with life’s challenges. Their strength drew me in and kept me involved right up to the very end.

Flaws notwithstanding, I am very much looking forward to the sequel.
Posted by Nancy at 3:52 PM