Ficciones by Jorge Luis Borges
My rating: 5 of 5 stars

”The truth is I grew up in a garden, behind lanceolate railings, and in a library of unlimited, English books.” 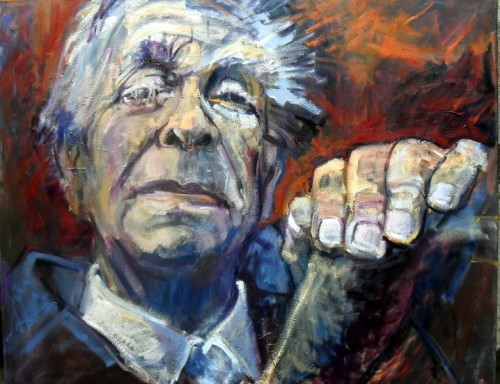 Jorge Luis Borges, possibly one of the greatest readers of all time, lost his eyesight later in life. I believe the most terrible thing to have happen to a reader is to lose their ability to see. Yes, with Audible now making thousands of books available to be read to people, a blind reader has not completely lost the way to their magical escape tunnels to other worlds. Maybe, if I were blind, I could convince myself that I’ve returned to the age of Homer, where an oral tradition is the only means to pass on stories to others, but that will be a difficult transition for me. I am a reader. I process words much differently by reading them than by having them read to me, so I do think that if I did lose my eyesight, I would be, frankly, finished as a reader.

The question would be, which is very much a Borges type question, is who then would I be?

The blind Borges became Homer, a lecturer who travelled the world, sharing brilliant suppositions by pairing bits of knowledge from here and there that were only made possible by his prodigious reading. These wonderful suppositions, new revelations of what makes us tick as thinking human beings, were only made possible because of all the information he had stored in his brain from...books. So when someone says to me, why do I need to know anything when everything is on the internet? I always say, having the information available doesn’t mean that you have the capacity to make the connections to fully comprehend and use that knowledge, or for that matter even know what to google in the first place.

Borges had the internet in his head.

I never really know how to review collections of short stories without the reviews becoming ponderously long. I decided to share a few quotes from the stories that I find to be interesting. My notes from reading this book are vast and easily could have led to a dissertation many times longer than the original source material. I desisted.

For those readers who struggle with Borges’s text, don’t worry. I struggled as well. I had to read and reread sections of the story to make sure that I captured more of what Borges meant. I am positive, many times, that I failed to completely comprehend all that he intended for me to glean from his writing. My advice is to forge ahead, keep swimming from island to island of wonderfully written passages. Do not become overly anxious. I do not want you to get a cramp and drown in the Borges Sea.

”From the far end of the corridor, the mirror was watching us; and we discovered, with the inevitability of discoveries made late at night, that mirrors have something grotesque about them. Then Bioy Casares recalled that one of the heresiarchs of Uqbar had stated that mirrors and copulation are abominable, since they both multiply the numbers of man”--Tlon, Uqbar, Orbis Tertius. I’d never really thought of mirrors as abominations before. Though mirrors have been associated with sex probably from the moment the inventor of mirrors first hung a shard on the ceiling over his bed (fanciful supposition).

”One of the schools in Tlon has reached the point of denying time. It reasons that the present is undefined, that the future has no other reality than as present hope, that the past is no more than present memory. Another school declares that the whole of time has already happened and that our life is a vague memory or dim reflection, doubless false and fragmented, of an irrevocable process” --Tlon, Uqbar, Orbis Tertius. I can remember pondering the concept of time as a child and wondering why we are so obsessed with it when it constantly reminds us of the quick passage of our lives. If we don’t know what time it is or what day it is or what year it is, we can’t possibly be crippled by the knowing our own age. We would be perpetually as young as we think ourselves to be.

”I cannot imagine the universe without the interjection of Edgar Allan Poe“--Pierre Menard, Author of Don Quixote. Poe, so ignored by his own country for most of his life. Thank goodness the Europeans (and one Argentinian European in particular) saw his merit.

”Every man should be capable of all ideas, and I believe that in the future he will be”--Pierre Menard, Author of Don Quixote. Ideas used to travel so slowly. It is almost as if Borges is anticipating the internet. Of course, as I stated earlier in this review, people must still have a wide base of knowledge in their own head to fully appreciate or apply the brilliant ideas of others.

”With relief, with humiliation, with terror, he understood that he also was an illusion, that someone else was dreaming him”--The Circular Ruins. This would explain a lot. Whoever is dreaming me needs to drink less alcohol or shoot less heroin because I could really use a more coherent path forward.

”I deeply lament having lent, irretrievably, the first book he published, to a female acquaintance”--The Work of Herbert Quain. Ahh yes, who hasn’t lent a book to a saucy literary woman or a handsome poetic man with the hopes of words shared easing the assault on their virtue. The problem, of course, is that rarely do lent volumes return to us. The rule, clearly, for readers and especially collectors is to never lend a book that you expect to get back.

”Quain was in the habit of arguing that readers were an already extinct species”--The Work of Herbert Quain. If they were really serious about saving readers as a species, they would have us behind bars in book filled zoos, encouraging us to reproduce with one another. 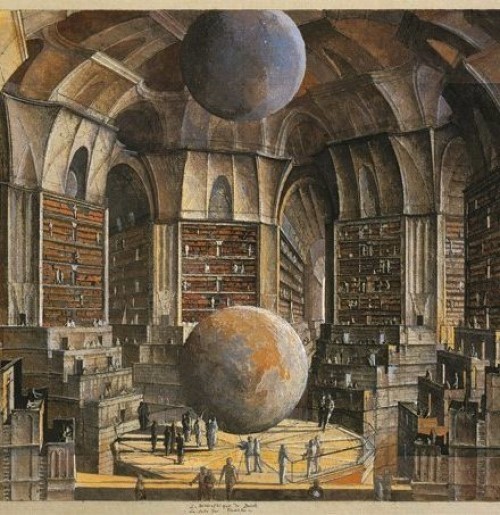 ”I suspect that the human species--the unique human species--is on the road to extinction, while the Library will last on forever: illuminated, solitary, infinite, perfectly immovable, filled with precious volumes, useless, incorruptible, secret”--The Library of Babel. There was a time I would have agreed with Borges. It is a nice thought that our libraries would exist beyond us, but with the current rate of libraries going extinct, especially in the United States, I would have to say that our species, or some devolved illiterate form of it, may outlive our libraries. Of course, when the internet goes black and the electrical grid goes dark, guess who will still have books to read….me! Candlelight was good enough for Honest Abe. It is certainly good enough for me.

”Whosoever would undertake some atrocious enterprise should act as if it were already accomplished, should impose upon himself a future as irrevocable as the past”--The Garden of the Forking Paths. I could have used this advice several times over the course of my business career, when I sold pieces of my soul. To imagine that the act is already done would have eased the moment when the loss is weighed, measured, and excised.

”In all fiction, when a man is faced with alternatives he chooses one at the expense of the others. In the most unfathomable Ts’ui Pen, he chooses--simultaneously--all of them”— The Garden of Forking Paths. I was thinking as I read this how useful it would be to run simulations of several choices that could show me the outcomes, not only of the first decision but the rippling effects of that decision over the next ten years. The interesting thing in watching how people make decisions is that, even if they have the percentages before them of potential success, they will still go with those fabled gut instincts, even though the simulation shows a much lower potential for success. We are a baffling species, naturally distrustful of knowledge.

”What one man does is something done, in some measure, by all men”--The Form of the Sword. The capacity for greatness or horror exists in all of us. To celebrate one is to celebrate all. To condemn one for an act is really, in many ways, condemning us all.

”’The next time I kill you,’ said Scharlach, ‘I promise you the labyrinth made of the single straight line which is invisible and everlasting’”--Death and the Compass. This has got to be one of the most unique death threats I’ve ever heard uttered. If only Clint Eastwood was still making Dirty Harry movies. 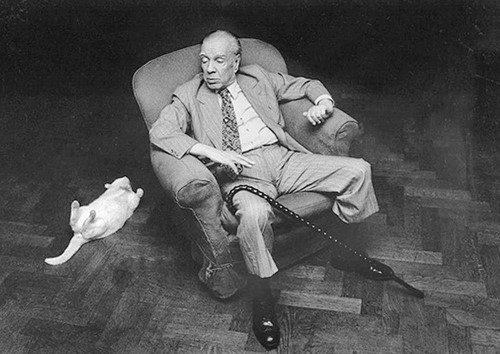 ”The time for your work has been granted”--The Secret Miracle. We can only hope, right? I hope Borges accomplished most of what he wanted before the final swing of the glittering scythe. I do want to encourage everyone that, if there is something you know you should be doing, you should get to it. If you have been putting off asking the libidinous (hope springs eternal) librarian out on a date, do it. If you are supposed to be painting, writing, or starting your own business, move the time table up. The sand in the hour glass is flowing faster than you think, and there will be times when it inexplicably speeds up. Carpe Diem!

Posted by JEFFREYKEETEN at 10:33 AM